Back in March we published our second annual ITC Intelligence Report. This week we are going to cover some of the leading ITC firms in 2021 as evaluated in our annual report. The players in this area are quickly evolving and even since we published our 2nd report, there has been major news, impacting the players. For example, the merger between Crowell Moring and Brinks Gilson that will go into effect today (July 1st), will have a big impact on our rankings in 2022.

We published a list of about 70 ITC lateral moves in our annual report. But since then we have observed more moves in the sector. For example Andrew Pratt moved from Venable to Devlin Law earlier this year. Or the recent merger between Crowell and Brinks will create a powerful ITC group as Lyle Vander Schaaf’s group at Brinks will be joining Kathryn Clune and Josh Pond’s group at Crowell.

As the data from our second annual ITC Intelligence Report suggests, there was a 25% increase in ITC Section 337 Investigations in 2020 compared to 2019 (64 investigations vs. 51 investigations). This may come as a surprise to some, especially now that we have confirmation in numbers that the US GDP was negative for most of the 2020 due to the pandemic. But with recent major victories for plaintiffs, getting an injunction is seen as a strategy to increase the total damage in a related district court case or settlement negotiations. Therefore, some argue that ITC is the perfect venue for that as the complainant goes after injunction and if successful, it can be leveraged in negotiations to drive up the settlement amount. 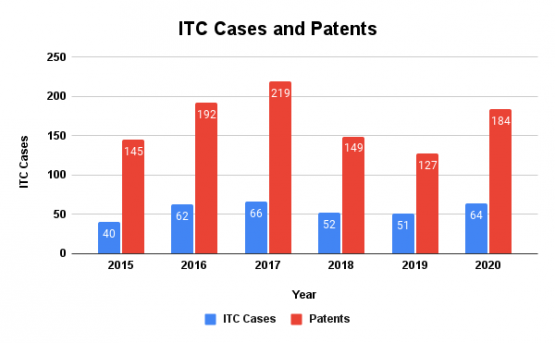 During the period from January 1, 2015, through December 31, 2020 covered by our second annual ITC Intelligence Report, a total of 335 investigations were filed. In total, 371 law firms have represented either the respondents or complainants in one or more ITC violation investigations. We identified 199 firms that represented complainants, and 284 firms that represented respondents, while some firms were on both sides in different cases. Furthermore, our study found that a handful of firms have been tremendously active, resulting in a large percentage of all cases being handled by a small number of law firms. Some law firms, especially in the DC area are known for their ITC expertise and ITC Section 337 Investigations is all they do.

Activity Ranking
Recent activity is a better indication of how active a firm or an attorney is at the moment, so we decided to use a weighted average to slightly discount the cases from prior years and give more weight to the recent cases. So for example, a law firm with five ITC investigations in 2016 should be ranked lower than another firm with five investigations in 2020.

Performance Ranking
We want to identify those law firms that have higher activity, and at the same time, have a high success rate. To calculate the performance, we used a weighted average of the Success and Activity Scores. This helps us identify the law firms that have higher activity scores, and at the same time, a higher success score for those cases. For more details on our ranking methodology, please see Patexia Insight 106.

The following is a list of 15 ITC firms ranked among the top 50 best performing or most active ones for representing respondents, complainants or overall. Being in the top 50 out of 371 firms, means that they are ranked in the top 1 to 10 percent among all ITC firms, active before the International Trade Commission Section 337 since 2015. Here is the list in no particular order:

In the following weeks we will continue our coverage of patent and trademark firms. We will publish some of the best performing and most active ones. We will also gradually start our coverage of Hatch-Waxman attorneys and firms, as we prepare to publish our second annual ANDA Litigation Intelligence Report in August. You can pre-order the report directly from our site now. Stay tuned!