Patent litigation remained strong in the second quarter of 2021. District court litigation, in particular, increased 11% in Q2 compared to Q1. Inter-Partes Review also went up 17% in Q2. This week, we will look at the IP trends in the first half of 2021 as we review patent and trademark prosecutions as well as ITC, ANDA, IPR and District Court patent cases.

The following chart shows the District Court Patent Litigation by year. In the first half of 2021, a total of 2139 patent cases were filed, compared to 1942 in the first half of 2020. This represents an increase of 10% from the previous year. If the same trend continues, we expect that by the end of the year, the number of cases move above 4,000 for the first time since 2016. 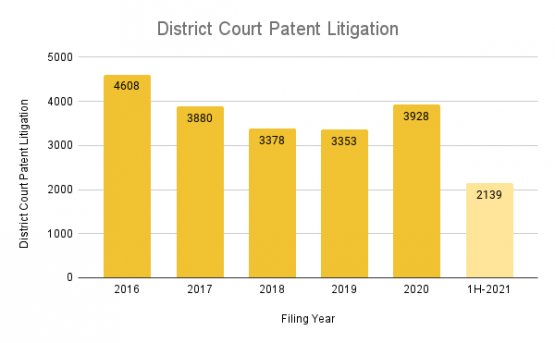 During the first half, ITC Section 337 Investigation also remained very strong. In the first half, a total of 32 investigations were filed, including 28 violations. This is 45% higher than 22 investigations filed during the same period in 2020. We have covered the increased popularity of ITC in our recent Insight articles. We expect this trend to continue for some time as expansion by law firms in recent months is a sign of this strength. 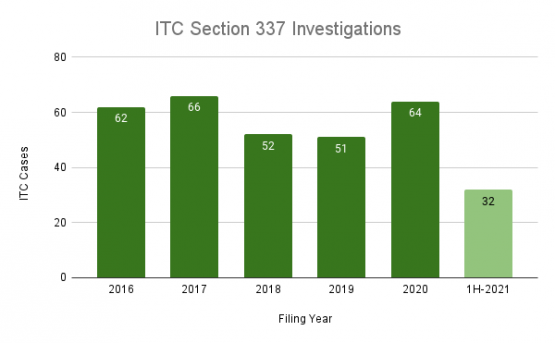 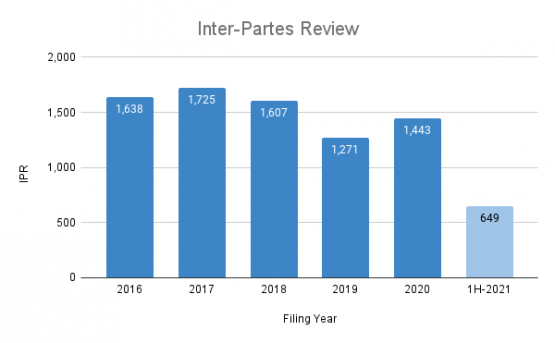 Hatch-Waxman litigation is one of the areas in IP that has not seen the same uptick in activity in recent years. Since 2018, the number of cases has been falling. In the first half of 2021, 102 ANDA cases were filed, compared to 141 in the same period of 2020. This represents a decline of 28%. We are preparing our second annual ANDA Litigation Intelligence Report. As per our tradition, in our upcoming ANDA report, we will evaluate all the stakeholders including ANDA lead and local counsels as well as ANDA firms and pharmaceutical companies. 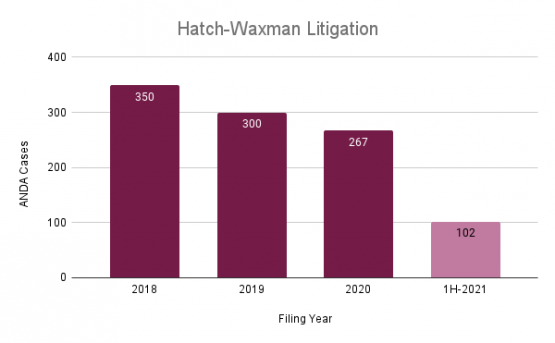 In terms of the litigation venue, PTAB again came first overall with 698 cases in H1 of 2021 followed by the Western District of Texas (533 cases). With Judge Albright as the nation’s busiest patent judge, the Western District of Texas (txwdce) has seen an increase of 21 percent in the case count in the first half of 2021 compared to the same period in 2020. Texas courts have historically been popular for patent litigation. The Eastern District of Texas (txedce) is still among the most popular ones. But we also noticed CAFC listed as number 4 after Delaware. The number of PTAB originated Federal Circuit cases have been on the rise lately.  The following chart shows the top 10 patent litigation venues in the first half of 2021. 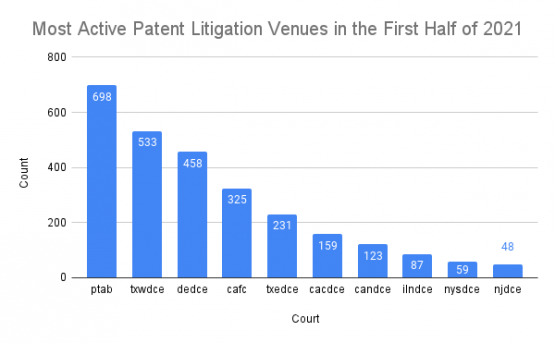 Moving on to patents, as illustrated in the bar chart below, in the first half of 2021, we observed more weakness as it was predicted by our earlier article (Patexia Insight 79). If the same trend continues in the second half of 2021, we will see a drop of about 4 percent in the number of issued patents. In the first half of 2021, a total of 187,530 patents were issued by the USPTO, compared to 195,243 in the same period of last year. This represents a 4 percent drop. We believe this falling trend will continue for several years as foreign companies (e.g., Japanese and European tech companies) will continue to cut back on their filings. We evaluated all active patent firms in our recently published 2021 Patent Prosecution Intelligence Report. The report also covered some of the ongoing trends. 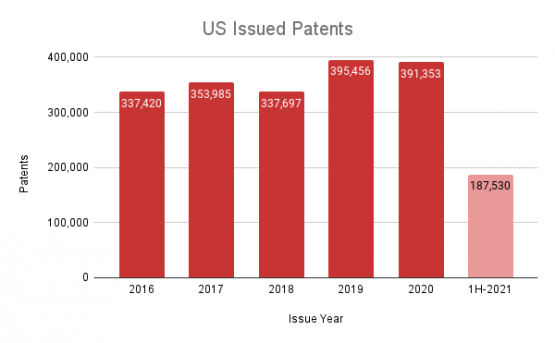 Trademark was one of the very active IP areas in the first half. As we recently covered in Patexia Insight 109, as well as our Trademark Intelligence Report (2021 Edition), Chinese companies have been filing heavily in recent years. In 2020, we saw a big jump in trademark filings (see the chart below), mostly fueled by Chinese entities. This trend seems to be continuing in 2021. In the first half of the year, a total of 355,305 trademarks were filed. This is compared to 265,786 trademark applications in the first half of 2020 or an increase of 33%. 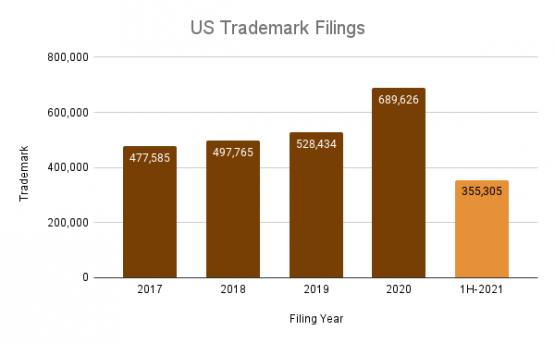 In the following weeks, we plan to have a deeper coverage of trademarks and patents. We will publish some of the best performing and most active patent and trademark firms as well as attorneys as published in our 2021 reports. Stay tuned!