A couple of weeks ago we released our second annual ANDA Litigation Intelligence Report where we covered the rankings, statistics, and comprehensive analysis of ANDA and Hatch-Waxman stakeholders. We couldn't help but notice the decline in ANDA filing activity that has started after reaching its peak in 2018. A year-over-year comparison of the ANDA data as seen in the following chart shows the trend in the last four years. We observe a considerable decline from 2018 to 2019 (a decline of 4.2 cases/month) followed by a smaller decline from 2019 to 2020 (2.7 cases/month) and the sharpest decline from 2020 to 2021 (5.3 cases/month) indicated by the data analyzed for the first half of 2021. In total, this represents a decline in ANDA case filings of about 36%, from 2017 to 2021. The same trend is noticed with the number of patents involved in these cases. 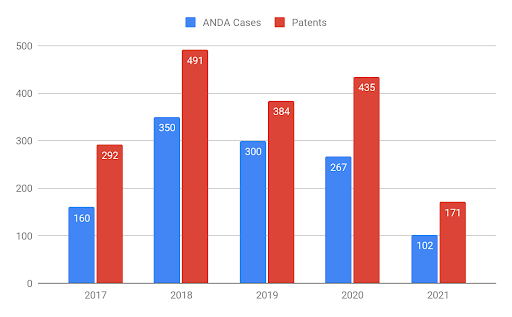 For this year’s report, we have improved the accuracy of our data by crawling and parsing more legal documents related to Hatch-Waxman cases, which resulted in identifying 1,471 attorneys who were involved in a total of 1,179 ANDA cases, filed in a 4 year period from July 1, 2017, through June 30, 2021. We know how important it is for brand and generic pharmaceutical companies to find the right counsel for their Hatch-Waxman cases so besides the high-level statistics covered, we have also evaluated all stakeholders in Hatch-Waxman cases including ANDA attorneys, local counsels, law firms, pharmaceutical companies, and judges, ranking them based on their activity and performance. While ANDA cases make up a small fraction of all patent cases (sometimes less than 10% of the annual district court patent litigation cases), they prove to be of great importance for law firms and companies as well, because of high potential earnings that come from the brand and generic drugs, so it's worth examining the possible reasons for the decline.

Patexia covers many areas of patent litigation and the trend of decline in ANDA is different from the larger trend we have observed in recent years (i.e., increased activity in district court patent litigation, ITC Section 337, and Inter-partes Review). Here we should underline that ANDA cases are unique among patent litigation matters because the act of infringement itself is the submission of an application to the FDA to market a generic drug in the future, rather than the “classical” infringement case when making, using, offering to sell, selling, or importing a patented product.

A pharmaceutical company that wants to develop a generic version of the previously patented drug, should file an ANDA during which they not only demonstrate that the new drug is chemically or pharmaceutically equivalent but also need to prove the “bioequivalence”, meaning that the generic drug will work in the body in the same way and be as safe and effective as the brand drug. From this information, we deduce that the reasons for the decline in ANDA litigation should be searched first of all in the patent activity, more specifically the drug patents granted 20 years ago. This number might be lower for that period so today we have fewer patented drugs that are expiring.

Furthermore, we know that one branded drug does not have equal profitability with another, which results in accumulated interest in specific drugs and multiple ANDA cases filed over them. Here we can mention for example Abilify which is a top-selling antipsychotic prescription in the United States. The company that manufactures the drug, Otsuka, has earned revenue of $4.9 billion in 2014 only. Another example would be Oxycontin, used for the treatment of moderate to severe pain. This drug has generated approximately $30 billion in revenue for its manufacturer Purdue Pharma over the years. Both of these drugs have been litigated in more than 60 and 50 ANDA cases respectively in the past years. This makes us want to look into the data of the drug patents that have expired recently to see if we can find something similar in profits that might gather the attention of the top generic manufacturer pharmaceutical companies.

In a list provided by Pharmatutor, we don't notice drugs with record sales as the ones mentioned above that could be litigated in multiple cases by different companies. The only exception is Truvada from Gilead Sciences which is used as a treatment for HIV. Only during 2019 in the USA, they made $2.64 billion in sales. The patent for emtricitabine, one of the two main components of Truvada, expires in September of 2021, so it will be very interesting to see how this will reflect in the number of ANDA cases for the whole 2021 in total.

ANDA data from our ANDA Litigation Intelligence 2021 Report show even more interesting statistics such as the distribution of case filings by jurisdictions. The majority of generics companies in the United States are based or incorporated in Delaware or New Jersey so it doesn't come as a surprise that New Jersey and Delaware account for 92% (1,087/1,179) of cases filed during the period of our study. The rest is scattered throughout a variety of District Courts from 16 other states (NY, WV, FL, NC, PA, IL, IN, TX, CA, CO, LA, NV, CT, MI, UT, and VA) as seen in the chart below: 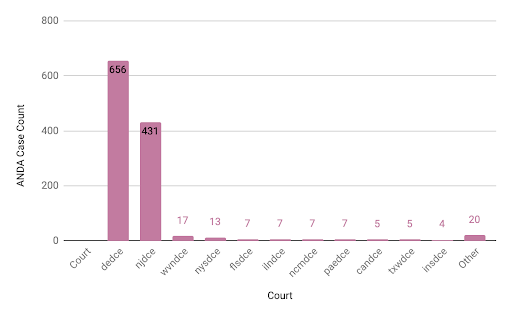 Our deeper analysis of the legal documents related to Hatch-Waxman cases reveals more interesting observations, especially after we evaluated the outcomes of these cases. It is worth mentioning that ANDA cases are less likely to end in a settlement compared to the other cases of patent litigation. It is noticed that the majority of ANDA cases are dismissed for one reason or another, meanwhile a smaller portion go to a judgment of some kind. The review of these judgment decisions suggests that the claimant in an ANDA case has more chance to win than in other patent litigation cases. Below is a chart that shows the PACER status of ANDA Cases filed and decided between July 2017 through June 2021: 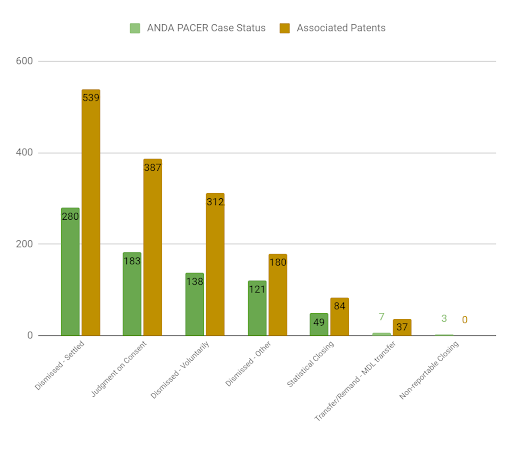 The outcome of these cases and how they favored either the plaintiffs or the defendants were essential in determining the activity and performance of 364 companies, 1,471 attorneys, and 243 law firms out of which we have also identified the ones that acted as local counsel especially in the New Jersey and Delaware where some attorneys and law firms were very active during the period our study covered. The activity and performance rankings as well as the 360-degree overview of ANDA statistics, help corporations make more data-driven decisions, whether they are a company struggling with finding the right counsel for ANDA litigation, or law firms that struggle to distinguish themselves from others based on an independent third party with proven results.

Stay tuned in the following weeks as we plan to cover more key topics related to our ANDA Litigation Intelligence 2021 Report such as identifying the top law firms and attorneys who were most active and performed the best in our period of study. We also plan to publish some of the best patent prosecution law firms in 2021.

An earlier version of the article first appeared on IP Watchdog on August 28th.

Related Organizations
Gilead Sciences Otsuka Pharmaceutical Purdue Pharma
Tags
anda litigation pharmaceuticals hatch-waxman pharma drugs law firm
Share
Previous Post
Next Post
3 Comments
vagisha singhfor generic version of drug from already patented drug ANDA standing can not be ignore but researchers who wish to appy a generic version can develope generic version with more efficiency and improvement in previous drug - the R&D, they can be suggeted for doing research in this way . and modified version .
Sep 4, 2021
vagisha singhNice points mention in this post and it was very usefull post ,thanks for post
Sep 4, 2021
vagisha singhit is nice and usefull post .thank you for post
Sep 4, 2021
2nd Annual Patexia Mixer