Last week we released our fifth annual IPR Intelligence report where we covered the IPR filing activity from July 1, 2016, through June 30, 2021. Similar to prior years, in the 2021 edition, we provide high-level statistics, analyzing data for the IPR cases, and provide rankings of law firms, attorneys, companies, and PTAB judges under different categories (Petitioner, Patent Owner, and Overall).

Besides the improved data extraction and analysis processes that helped us discover new attorneys previously not detected, this edition dedicates a section to lateral moves, first introduced in our ITC report back in March. The section became popular and helped law firms and attorneys understand how the ITC landscape was changing and which firms were adding or expanding that IP practice. Today we are going to review the IPR trends in the last five years with data provided from our 2021 IPR Intelligence.

We have previously covered IPR trends in our Patexia Insight series. As we concluded in multiple articles including Patexia Insight 111, IPR follows the district court trends with a lag of about 12 months. Because district court activity has been gaining momentum in the last 12 months, we expected an increase in IPR filing. Year-over-year (YoY) comparison of the IPR data shows that the activity has fluctuated between 1,271 and 1,725 cases per year, reaching its maximum and minimum during 2017 and 2019 respectively. The following chart shows the IPR filing activity for full five years from 2016 to 2020 including the data for the first half of 2021: 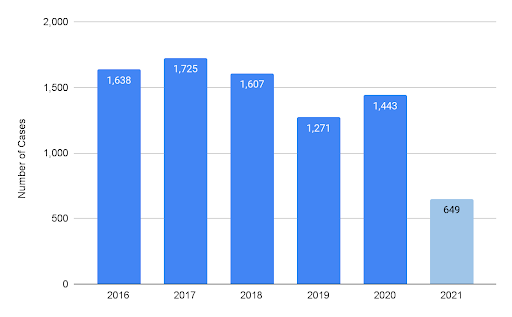 The most recent data shows that in the first half of 2021, a total of 649 IPR petitions were filed, which is just 3.5 percent lower than the 673 petitions filed in the first half of 2020. However, during the second quarter that ended on June 30, IPR filing rose 13.5 percent, compared to the first quarter of 2021, which together with the increase in district court activity,  makes us think that this growth in filing activity will continue during the second half of 2021 and perhaps in 2022.

In order to better observe and study the trends over the last five years, we dive deeper in our IPR Intelligence report and review the outcome of all cases for the period of this study. We have reviewed the case-level status as reported by the US Patent Office, especially the case denial and institution rates. Our data shows that as of August 20, 2021, for 7,582 cases filed through the end of Q2 2021, 78.1% (or 5,925 cases) have one of the following three statuses:

Not only these are the most common outcomes for IPRs, but also nearly all cases eventually will end up in one of these three categories. As analysed in the data, about 6.0% of the cases are pending, which means they were filed within the last six months, meanwhile instituted cases cover about 7.6%, which eventually will settle or receive the final written decision. The remaining cases are terminated because of some procedural errors or adverse judgement. The pie chart below shows a summary of the outcomes for all cases filed from July 1, 2016, through June 30, 2021: 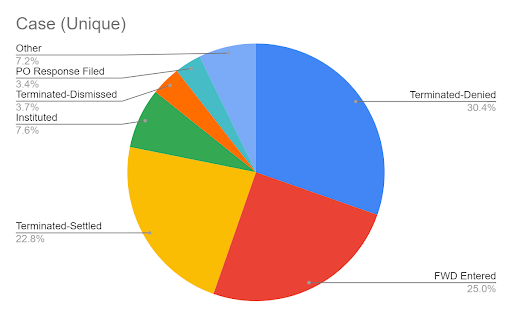 We noticed that out of the 5,925 cases that had a non-pending status, 39% are denied institution. To better observe any patterns in the final outcomes, we compared case-level institution, settlement, and denial rates over the last five years. This data had to be limited at the end of 2019 in this study, as the data in the last 18 months is not complete and will change in the near future. The following chart shows the trends for non-pending cases from 2015 through 2019: 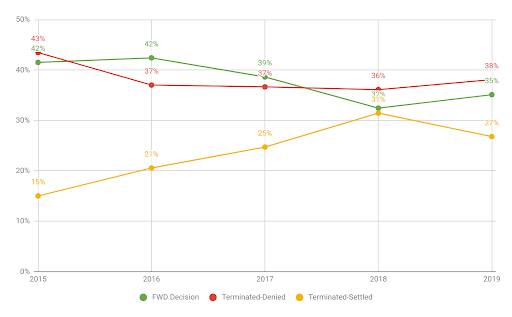 As seen in the chart above, the Final Written Decision rate has declined from 42% to 35% for the period between 2015 through 2019. At the same time, the denial rate declined from
43% to 38% during the same period. This has resulted in the increase of the settlement rate which has risen significantly from 15% in 2015 to peaking as high as 31% in 2018, almost a third of cases have been settled.

We believe this has happened for a number of reasons. First of all, with more than 10,000 IPR cases filed since its inception in September 2012, there is now enough history for both sides to predict the outcome of a case. As a result, when the patent owners feel the probability of victory is limited, they may decide to settle and cut their losses rather than continuing the fight. On the other side, petitioners have become more careful in choosing the patent they want to challenge as well as the prior art. This may have impacted the quality of cases that are brought before the PTAB. For the same reason, we observed a decline in the denial rate. Again, we believe petitioners choose higher quality cases and only proceed with an IPR if they find a quality piece of prior art.

Stay tuned as in the following weeks we plan to cover more key statistics from our 2021 IPR Intelligence Report as well as analyzing some of the most active and the best-performing IPR firms and attorneys.

An earlier version of the article first appeared on IP Watchdog on September 11th.