Earlier this year, we published our Third Annual Patent Prosecution Intelligence Report. Based on this report, we identified the patent firms with the largest growth or decline in 2020 in Patexia Insight 107. This was a noteworthy year for both positive and negative aspects that were brought by the pandemic.

This week, we decided to analyze the data from our third annual report and compare that with our second annual report to see which firms ceased to exist during the pandemic year and see if we can find the reasons behind that. Today we will review the firms that were among the top 1000 most active ones in 2019 but were no longer around in 2020. 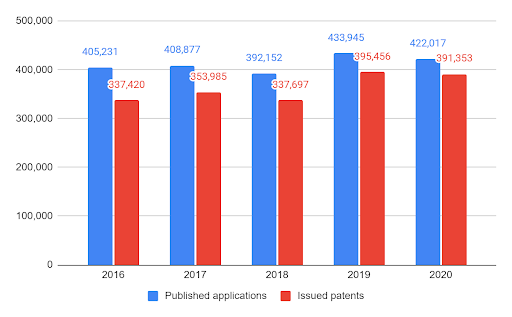 Measuring the activity and performance of law firms with quantitative methods has never been easy due to a number of reasons including mergers, spelling errors, similar names that makes the collection and cleanup of the data challenging. Since the release of the first Patexia Insight Report, the Patexia Data Science team has been constantly perfecting its data collection and cleanup processes. We now have the ability to automatically read thousands of documents in the file wrapper and extract patent attorney names. Therefore, we expect to perform these analyses at the attorney level for our next patent report. This means that soon we will be able to identify the most active and best performing patent attorneys and even go one step further and identify the rainmakers in patent prosecution for different firms.

In the bar chart below, we see five law firms that were active in 2019 but disappeared in 2020. The bar shows the number of patents they obtained for their clients in 2019. These five patent firms either went out of business, changed their names or filed for bankruptcy. 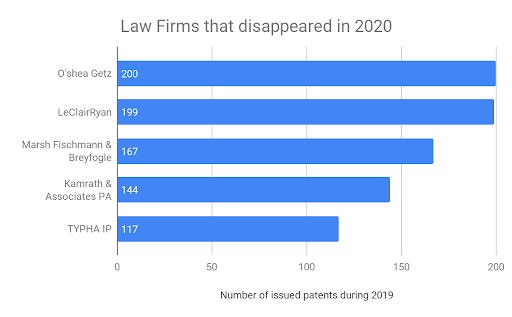 O'shea Getz is one of the more active firms with 200 patents issued in 2019. Looking closely it seems that they were founded in 2005 and represented companies mostly in the high tech area. The firm renamed itself in 2020 to Getz Balich LLC. Raytheon Technologies is their top client.

LeClairRyan with 199 issued patents in 2019, filed for bankruptcy and all their partners moved to other firms. Their decline first caught our attention in Patexia Insight 78 with a big drop in issued patents during 2019 when compared to prior years. Founded in 1988, they grew slowly during the 90s, then at the turn of the century they went through a rapid expansion. This growth, however, caused increased overhead expenses as they expanded from a regional player throughout the U.S. This caused decline in revenue and as a result departure of partners. In 2019, this ultimately forced the firm to file for bankruptcy. In the last few years, we have noticed several law firm dissolutions and bankruptcies including Sedgwick in 2018, Dickstein Shapiro in 2016 and Dewey & LeBoeuf in 2012.

Another firm that is not present in 2020 is Marsh Fischmann & Breyfogle. They announced on their website that most of their attorneys had moved their practices to other law firms in the Denver area. They focused on patents and trademarks and had high activity ranks in recent years with 167 issued patents during 2019 alone.

Kamrath & Associates run by Alan Kamrath is another law firm that is not around in 2020 since they were acquired by Mayer & Williams, an IP boutique in New Jersey with Microsoft as their top client.

The last firm we are covering is Typha IP. Arimi Yamda, the founder of the firm and all her team joined Michael Best last year. They mostly worked with major Japanese tech companies including Sony and Panasonic. With this acquisition Michael Best expanded its coverage of Asian tech companies.

In the following weeks we are going to cover some of the best Hatch-Waxman and PTAB firms. Stay tuned.