Earlier in February we released our Patent Litigation Report (2022 Edition) that covers the patent litigation activity during the past 4 years, from July 1, 2017 through June 30, 2021. In this report we analyze high level statistics based on all 14,506 patent cases, which were filed during this period as well as provide rankings of all parties, including 10,321 Defendants and 5,047 Plaintiffs. Today we will cover some of the most active plaintiffs and defendants based on the number of cases and also patents they were involved in.

While the patent litigation in district courts had declined after the introduction of PTAB in 2012 and other factors such as the Alice Case, after 2019 we noticed an increase in filings especially in certain districts as covered in detail in Patexia Insight 123. With the latest data for the full year of 2021, we confirmed the increase for the second year in a row. It appears that the activity reached the low point during 2019 with 3,353 cases and from there it moved upward, reaching a new high of 3,981 cases in 2021 for the previous five years. The pandemic may have had its impacts when it comes to delays in scheduling or remote trials, but it did not negatively impact the filing activity. The following chart shows the filing activity and the number of unique patents per year for the last five years. 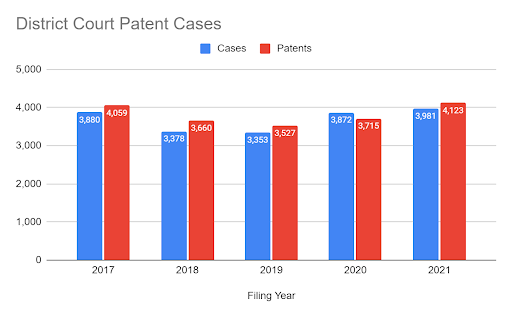 During the period of our study from July 1, 2017 through June 30, 2021 our Data Science team identified 14,251 unique companies that were acting as defendants, or plaintiffs (or active on both sides). For plaintiffs, we counted a total of 5,047 unique entities with an average of 3.3 cases per plaintiff. As for defendants, there were 10,321 entities with an average of 1.9 cases per defendant. The average number of cases does not reveal much about the activity of some of the most active entities. The following table shows the top 10 most active defendants in the 4-year period of our study:

As you can see, the list is populated entirely by companies that are very active in the technology field including designers or manufacturers of electronic devices, hardware, software and cloud services. All of the above companies have innovative products which makes them a target for entities with technology patents related to their product areas.

The decision to calculate the activity score based on the combination of unique patents and cases is more effective on the plaintiff side. As you can see in the following table, a company such as Roche and Abbvie are among the most active ones because of the number of unique patents involved in their cases.

We looked at the most active technology areas based on the International Patent Classification Codes (IPC) to see which areas were most active during this time. This is useful to understand the most litigated technologies and to see the correlation with the most active companies during the same period. The following chart shows the most active IPC codes as a percentage of total cases: 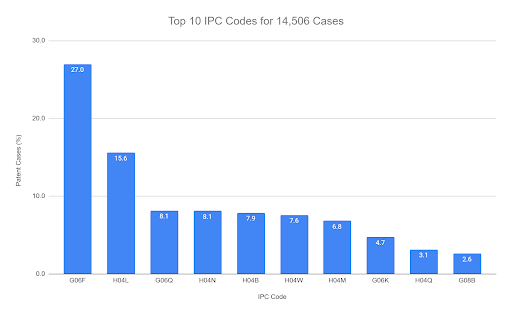 As you can see, the most common IPC code, G06F, occurred in 27% of cases and corresponds to “electric digital data processing”. When analyzing the IPC data for the most active defendants, we observed that G06F and H04L IPC codes comprise 50-60% of the total cases for Samsung Electronics, Apple, Google, LG Electronics, Amazon, Huawei Technologies, ZTE and even more than 80% for Microsoft, Hewlett Packard, and Verizon.

Next week, we will have a case study about data-driven recruiting and how we used IP analytics to help open a DC office for an Am Law firm. Stay tuned!