Search
Pedram SameniApr 28, 2022Legal
Patexia Insight 134: The Most Inventive Cities and States in the US

Last week we released our 4th annual Patent Prosecution Report that covers the patent prosecution landscape in the last five year, between January 1st, 2017 and December 31st, 2021. Thanks to our constant improvements and automation of the data extraction process, this year for the first time we have provided attorney and agent rankings. Our data shows a total of 27084 Registered Patent Attorneys and Agents who filed 2,356,882 applications and obtained 1,823,414 Patents for their clients. Besides measuring the activity, efficiency and performance of all stakeholders (attorneys, agents, law firms, patentees, etc.) in different categories, the report also provides various statistics related to patent prosecution. One of the highlights in the report is the unequal distribution of inventors based on the issued patents for different states as well as cities.

US-based entities have been the most active patentees before the USPTO, with their activity accounting for almost 53 percent of all new patents from this patent authority. However, when it comes to evaluating the location of inventors, it is noticeable that some states have quite a different weight than others. 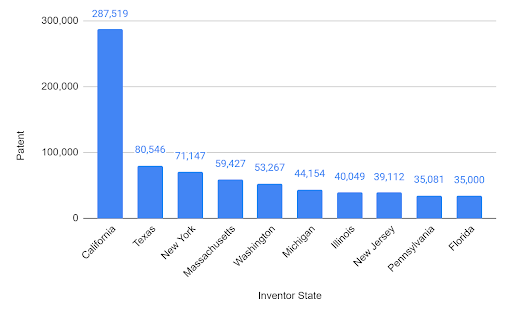 The above chart shows the number of issued patents sorted by the inventor’s state. California ranks first with 38.2% of the patents issued followed by Texas at 10.9%. The inventors from the other states contributed less than 10% of the issued patents each. Interestingly, these top two states are also home to the busiest district courts when it comes to patent litigation as we had previously covered in Patexia 123. The same trend is seen in the distribution of patent agents, attorneys, and law firms with each one of them trying to adapt to the unequal distribution of workload in different states.

An important factor to consider when analyzing this data sorted by states is the population of these states. If we calculate the data per capita, we will get a different order. This helps us determine which states are the most inventive states per capita. We used the total number of issued patents as well as the census data in order to build the following chart. 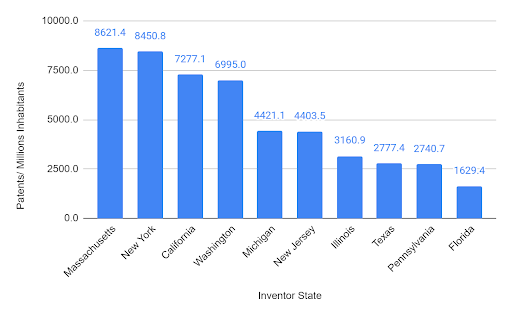 As shown above, Massachusetts, although being only the 16th state by population ranking and the 6th smallest state in size, ranks first when calculating the number of patents per total inhabitants. Biotechnology, engineering and information technology are some of the leading industries in Massachusetts and they are believed to be the biggest contributors to the high number of patents coming from this state.

Diving deeper in the data, we also wanted to know which cities were home to the most inventors based on the address data they had provided to the USPTO. As expected, even when it comes to the cities, the issued patents distribution is not equal. 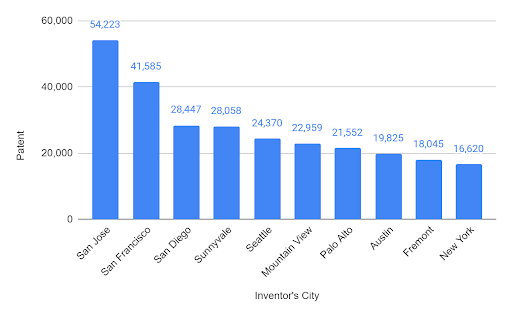 Almost one in five patents comes from San Jose, CA, which leads the ranking with 19.7%. The capital of Silicon Valley seems to have more innovative residents than any other city, despite being only the 11th city when it comes to population ranking. San Francisco and San Diego follow with 15.1% and 10.3% of the patents, respectively. Seven cities out of the top ten belong to the state of California which confirms further its weight on innovation. Entities with their offices in Silicon Valley and their inventors (employees) living nearby, are the reasons behind the higher number of issued patents in California. 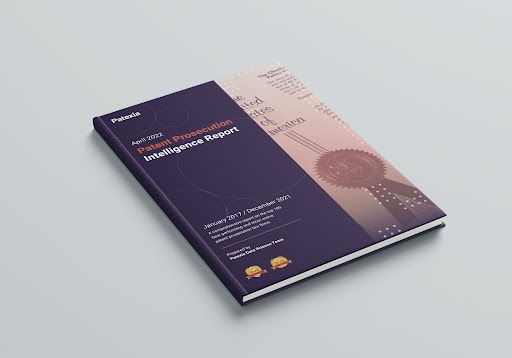 The full Patent Prosecution Intelligence Report goes further with high level statistics evaluating and analyzing the activity of foreign countries as well as patent types, technology centers, filing and issuance trends etc. Besides the evaluation of attorneys, similar to previous years, we have evaluated a total of 117,772 patentees, that applied and obtained patents through 3,591 patent law firms.

Stay tuned as in the following weeks we will continue to cover more highlights about this report as well as uncovering some of the most active and best performing entities in the ITC Section 337 investigations!