Earlier this March, we released our third annual ITC Intelligence Report, providing statistics and trends of the ITC Section 337 Investigations landscape. Besides the high level statistics, the report also provides the readers with rankings of all entities involved in the ITC investigations. We covered some of the most active and best performing companies and law firms in Patexia 132 and Patexia 135, this week we will focus on some of the very top attorneys earning their rank for activity or performance during the past six years.

Since January 1, 2016 through December 31, 2021, a total of 370 ITC Section 337 inves- tigations were filed. Out of this number, 322 were violation investigations with 255 were terminated as of March 2022. In terms of volume, the ITC investigations are not comparable to patent cases filed in the district courts, however they have a much faster pace of litigation and effective remedies executing the exclusion orders directly at the U.S. Customs. The ITC investigations have been rising during the last two years. The activity reached 71 cases in 2021. The number of patents involved has gone up as well which is an indicator of higher workload and costs. The following chart summarizes the filing activity during the last six years: 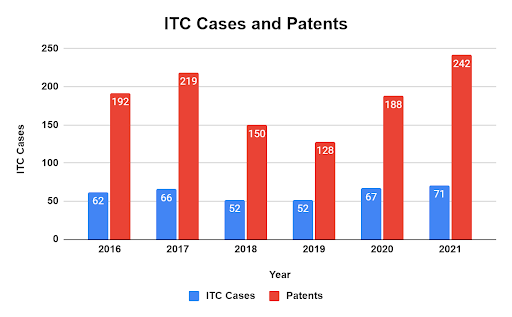 A total of 4,628 attorneys were involved in one or more of the 370 cases filed between January 1, 2016 through December 31, 2021. 2,417 attorneys represented complainants, while 3,316 represented the respondents with some attorneys being active on both sides in different cases.

The following table provides a list of some of the very best ITC attorneys ranked in the top 250 for their performance or activity according to our ranking methodology explained below. Being named among the top 250 out of 4,628 attorneys in total means that they belong to the top five percentile.

We have used the feedback of several ITC experts in order to improve our ranking methodology and truly reflect the performance and activity of different entities. During different surveys, a majority of respondents has made the argument that a more recent activity is a better indicator of activity in an entity, so instead of simply counting the cases, we use a weighted function and slightly discount older cases. As a result, an attorney with five cases in 2021 is ranked higher, compared to another attorney with five cases but distributed over several years. To reduce the large gaps between different scores, the scores now are calculated logarithmically and then scaled to 100.

When calculating the success score for each attorney, we considered the fact that an ITC case might have different outcomes for different respondents. Rather than giving all of them the same success scores, we allocated the proper score based on the outcome of the case for each of the respondents. The following table summarizes how we considered each of the outcomes and the scores we allocate to each of the parties and their representatives:

To calculate the performance score, we used a weighted average of Success and Activity. This is useful because it helps to identify those attorneys and law firms that have higher activity, and have a high success rate. Given that high activity dilutes performance over time, this is a better approach that can be used which makes it possible to compare entities with different workloads.

Tags
itc litigation patents patent patent infringement patent litigation
Share
Previous Post
Next Post
3 Comments
Susan We have a customer who manufactures printer cartridges and imports cartridges from Chin to US. They will sell the cartridges on Amazon. It is said when they import the products, they must file with US customs to meet requirements for certain IP reason. Could you help to go through the process? What is the total cost? If you have any questions, please let me know.
Jun 9, 2022
Susan Susan
Jun 9, 2022
Susan My email address: susan@zhono.com
Jun 9, 2022
2nd Annual Patexia Mixer