Last week we highlighted the companies with the largest growth or decline in patents in 2021 (Patexia 140). Covering a period of five years, from January 1st, 2017, through December 31st, 2021, the full Patent Prosecution Intelligence report analyzes the patent prosecution practice from multiple angles, providing key statistics as well as the rankings of all entities participating in this process.

While examining the companies with the largest decline, we noticed an overall decline among the Japanese companies, so this week we are going to look at the trends and identify the potential reasons behind this decline. 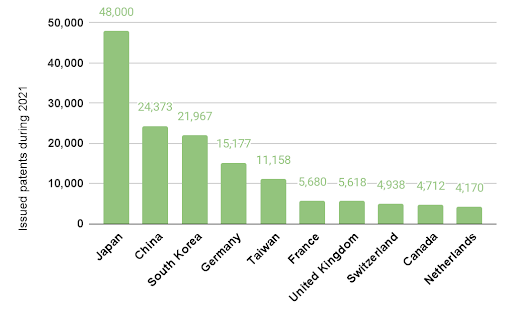 Comparing this chart with the one from the previous year, a notable change was China climbing to second place. The growth of the Chinese entities in patents and trademarks had been covered earlier in Patexia 136 and Patexia 137, respectively. Despite the growth, it looks like Japan will continue to lead in the near future, given that the patents issued to Japanese companies are almost double in number when compared to China.

The following chart compares the data of Japanese companies for the last five years (applications and patents): 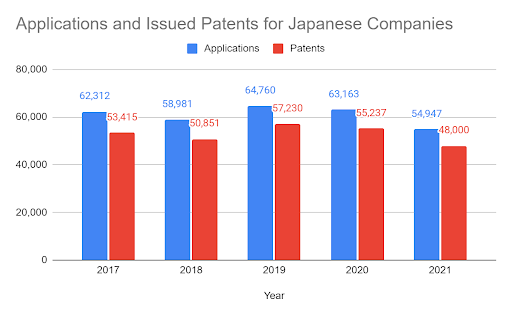 In 2021, the number of Japanese patents declined 13 percent or by 7,237 compared to 2020. A similar decline is also observed in the number of applications as shown above.

In 2021, a total of 19,867 patents were granted to these companies, which is equivalent to 41.4% of the total patents granted to all Japanese companies in the same year. As indicated above, with the exception of FujiFilm and Mitsubishi Electric Corporation, all the other companies have a declining number of patents in 2021.

The decline in the number of patents is not news when it comes to the domestic Japanese filings. This has been a concern for the Japan External Trade Organization (JETRO), which notes that Japan-based companies have not increased their number of patent applications in about a decade. In the original report, they underline that this comes in a period when Chinese companies are doing the exact opposite when it comes to patents. In terms of R&D expenditures, the official figures provided from the Statistics Bureau of Japan indicate another trend. In the past decade, the expenses have increased for several years, standing at 19.24 trillion yen in 2020 ($143,45 billion). This somehow points to the fact that the decline isn’t happening due to the lack of innovation or a tight R&D budget, but rather by a change in the IP strategy from the Japanese companies, caused most likely due to economic reasons.

The most recent data released by the Japan Patent Office (JPO), indicate a declining trend as well for the last three years, and they had also predicted this with a survey conducted earlier, which discovered that half of patent filers were planning to reduce the patent application volume. This might sound like a negative event, however some argue it’s a healthy development.

Traditionally, the Japanese companies have considered their patent numbers as a strong indicator and a statement of their innovative capabilities. As a result, they filed a lot of applications related to their products, regardless of the quality of invention, aiming at protecting from competition at any cost. After the 2008 Global Financial Crisis, this volume-centric strategy has been abandoned by most companies. Caught up in a very competitive environment with the USA, China and South Korea, Japanese companies tightened their IP budgets.

The years after the covid pandemic have created more budget pressure, while yen as a currency has reached a historic minimum. These difficulties demand careful budgeting so cutting unnecessary IP filings and patents specifically, is a good starting point. While the monetization of patents was unexplored before, now it has become a new reality. Japan based corporations hold some of the biggest patent portfolios in the world and this has made them reconsider their IP strategy in the direction of monetization. Maintaining a big patent portfolio is definitely expensive and this makes its optimization a necessity. Besides hiring the IP portfolio management firms, there are reports of even using AI technology in order to assess and cull the patent portfolios such as the case of Honda.

Nowadays, Japanese companies have shifted their focus towards being more selective and paying a lot more attention to the patent quality and usefulness in monetary terms. Patents generate significant returns when sold or licensed and there are reports which highlight the increasing numbers year over year. This has been another option for companies that wanted to maximize their IP profit while filing fewer applications and reducing their IP expenses. Bank of Japan tracked an increase from just over one trillion yen in 2010 to 3 trillion in 2017, with Asian and American entities as major licensees. Selectivity combined with monetization strategies seem to be the new wisdom in patent filing, and Japanese companies are embracing them in this challenging economy.

In the coming weeks, we will continue the coverage of the Patent Prosecution Intelligence Report, uncovering some of the best performing and most active law firms and attorneys in patent prosecution. Stay tuned!