The following chart details the District Court Patent Litigation trends over the last five years including the data for the first half of 2022. With the introduction of the IPR and the occurrence of cases where the patent eligibility was redefined (the Alice case), the district court cases declined from 2017 to 2019. However, since 2020, the numbers have increased yearly and the data for the first half of 2022 indicates that the district court litigation numbers might remain at a similar level as 2021, if not higher. 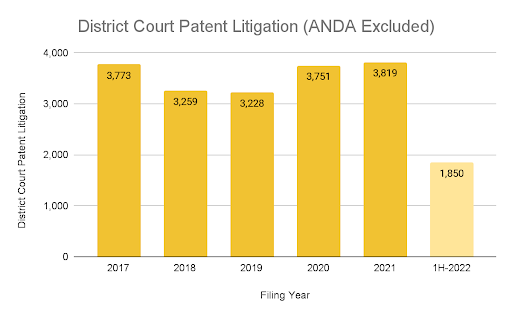 As shown above, during the first half of 2022, a total of 1,850 patent litigation cases were filed in district courts, which is about 6.5% less than the 1,979 cases filed in the first half of 2021. Broken down into quarters, during Q2, there were 990 cases filed, which is 15.11% more than the 860 cases filed in Q1. If these numbers are repeated in the second half of 2022 as well, then this year we might see a similar trend to that of 2020-2021. In our Patent Litigation Intelligence Report released in February of this year, we have shown that several entities such as law firms and companies, single-handedly have contributed to this growth in cases in recent years. Furthermore, a handful of districts in certain states such as Texas, California, and Delaware have been receiving the lion’s share of patent litigation cases as we covered in our Patexia Insight 123. 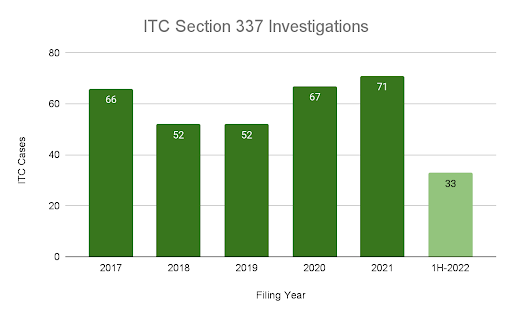 ITC Section 337 Investigations have also become popular recently. The data for the ITC Section 337 Investigations instituted during the first half of 2022 shows a decline of 15% with 33 cases instituted versus 39 cases for the first half of 2021, which was a record year with 71 Section 337 Investigations. In our ITC Intelligence 2022 report published this March, we used the lateral move data as a proxy for some law firms positioning themselves to benefit from the increase in this sector. Due to their nature, in ITC investigations, we usually observe operating companies filing against each other, but in recent years non-practicing entities and pharmaceutical companies have shown up in several cases, indicating strong numbers ahead. 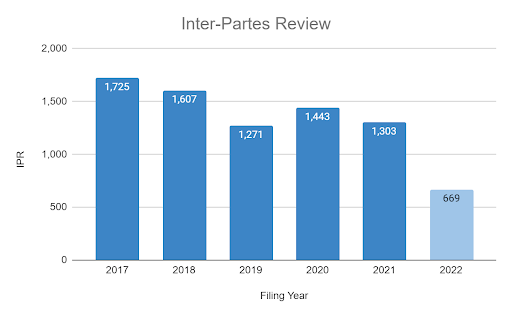 Since their introduction a decade ago, a significant portion of patent litigation has moved to trials before the Patent Trial and Appeal Board (PTAB) of the US Patent and Trademark Office (USPTO). These trials have a narrower scope compared to the other court IP trials since they are built only on the ground of invalidation under Section 102 (novelty) and Section 103 (nonobviousness). The above chart shows that in recent years the number of IPR cases has somewhat decreased, especially after 2020. However, as we have analyzed in Patexia Insight 44, 80% of the IPR cases are filed as a defense strategy from the defendant side on ongoing litigation in another venue. Therefore, there is a direct link between a high number of cases in district courts and a higher number of IPR filings, with a 6-12 month delay. The first half of the year saw 669 filings which is about three percent more than the 649 filed in the first half of 2021. When it comes to the first and second quarter comparison, there were 341 IPR cases filed in Q2, four percent more than 328 cases filed in Q1. What makes future increased IPR filings more likely is the recent memorandum released by the recently appointed USPTO director Kathi Vidal. PTAB until now maintained the right to deny IPR based on several discretionary factors, including whether the patent is being asserted in ongoing parallel district court litigation otherwise known as Fintiv rule. With the recent guidance memo, the PTAB will not deny anymore under Fintiv when compelling evidence of unpatentability is presented, when the parallel litigation is a Section 337 Investigation, and when the petitioner doesn’t submit the request on the same grounds as those of the parallel district court case. 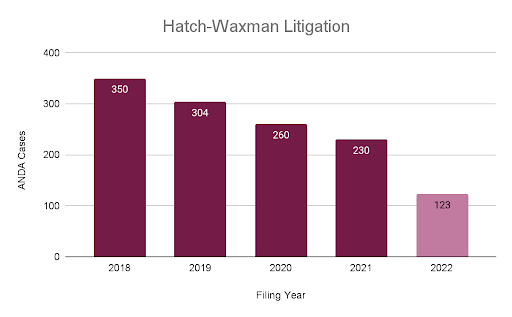 Hatch-Waxman cases follow a different trend from IP litigation in general. As seen above, the filings have been declining since 2018. When it comes to the first half of 2022, a total of 123 cases were filed which is 33% more than the 92 cases filed in the first half of last year. Broken down by quarters, it looks like both have been very balanced with 64 and 59 cases in Q1 and Q2, respectively. Depending on how the second half of the year unfolds, this year we might witness a slight increase in the cases for 2022 boosted by the differences with the first half of 2021.

We are currently preparing our third annual ANDA Litigation Intelligence 2022 report. Many law firms struggle to distinguish themselves in this important space, while pharmaceutical companies (generic and brand) always look for the best counsel to help them with their next Hatch-Waxman case. Our report evaluates over 240 law firms and more than 1,500 attorneys (including ANDA local counsel) based on activity and performance, enabling lawyers and IP practice groups to market themselves based on proven results and rankings, measured and verified by an independent third party.

In the following weeks, we will continue our coverage of Patent and Trademark prosecution trends before the USPTO as well as uncover some of the best attorneys in these areas. Stay tuned!