In late June, we published some of the best performing and most active patent law firms (Patexia Insight 142) based on the data of our Fourth Annual Patent Prosecution Intelligence Report released earlier in April. This report maps the patent prosecution landscape, offering insights into levels of activity and patenting trends and ranking the best performing and most active entities.

We have already covered various key findings from this report such as Apple’s Top Patent Attorneys in Patexia 133, Most Inventive US Cities and States in Patexia 134, and the rise of China as the Second Most Active Patentee in Patexia 136. This week, we will turn our focus to uncovering some of the very top patent attorneys who have earned their mention here based on their activity and performance over the past five years.

The data relating to attorneys and agents including their rankings is offered for the first time this year in our Patent Prosecution report. In order to extract the names from millions of documents available through the USPTO Public PAIR, our data and engineering team did over 2 years of research. Tens of thousands of documents were used to train our algorithm which then made automating this process possible.

To better understand the patent activity and trends during the past five years, we focus on patent filings as well as issuance. The USPTO publishes the patent applications 18 months after their filing, and this serves as a proxy for filing activity. As seen in the chart below, a total of 382,362 patent applications were published in 2021. On average, this number has dropped at a rate of 1.4% per year in the past five years, however, in 2021, it dropped by 9.21%. As for the number of issued patents, it has grown on average by 1.16% per year during the five-year period, while in 2021, it declined by 6.81% compared to 2020. 2019 was the year that registered the most published applications and issued patents with 433,868 and 395,456 respectively. 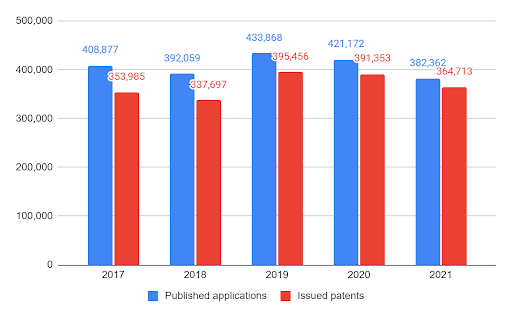 During the period of our study, from January 1, 2017, through December 31, 2021, a total of 27,084 registered patent attorneys and agents were active. These patent professionals come from 3,591 patent firms that represented 117,772 U.S. and foreign assignees. For each of the attorneys, we evaluated both their performance and activity in three different categories: overall, high-tech, and biotech. To do so, we extracted over 20 different signals and their combinations with different weights, as explained below in the ranking methodology section. Here is a list of some of the very best patent attorneys active during the past five years either in terms of activity or performance. Being ranked in the top 300 means that they belong to the top one percentile out of 27,084 patent attorneys active currently.

The full Patent Prosecution Intelligence Report provides all the data on the top 2,500 attorneys including their activity and performance rankings broken down into biotech, high-tech, and overall categories. For each attorney, we have also included their top three clients, allowance, the average number of office actions, extensions, pendency, etc.

Given that the patent documents data hasn't previously been available, there have only been few attempts to rank law firms or companies. For attorneys, this was considered near impossible due to the difficulty in processing large datasets. Powerful computation, as well as the availability of many sources of data provided by the USPTO and PACER, have made this task both feasible and affordable. The main challenges in this type of analysis are data extraction and data cleaning. For the past six years, the Patexia Data Science team has been perfecting its Entity Name Resolution algorithm. We now have the ability to automatically read thousands of PDF documents and extract useful information from them including the attorney names or law firms that worked on a particular patent application or an office action.

In order to generate our rankings, we extracted more than 20 important signals and used them to calculate the following high-level factors, which were then used for the activity and performance rankings.

Activity – The number of issued patents or filed applications by a corporation, law firm, attorney, or examiner.
Success – Obtaining a patent or patent claim from the perspective of the applicant, law firm, or attorney.
Quality – The claim quality, broadness, novelty, and market coverage that ultimately make a patent or a claim valuable.
Efficiency – The speed and simplicity of the process of obtaining a patent.
Cost – The overall cost, including attorney’s fee and the USPTO fees, for obtaining and maintaining a patent.

Stay tuned as in the following weeks we will uncover some of the very best trademark prosecution attorneys as well as begin exploring the key findings from our upcoming ANDA Litigation Intelligence Report 2022.