Earlier this month, we published some of the best trademark prosecution law firms (Patexia 143) based on the performance and activity data from our Second Annual Trademark Intelligence Report, released in late May of this year. This report is our effort to map the trademark prosecution landscape, offering different insights into levels of activity and trends, as well as ranking all participating entities by their activity and performance.

We have already covered different statistics from the report, such as the increase of trademark applications, originating from China (Patexia 137) for the last two years and some of the analyses and measures taken by the USPTO as a comeback. This week, we will turn our focus to revealing some of the very best trademark prosecution attorneys, earning their mention in this article either for their high activity or for their top-notch performance.

Since the trademark prosecution activity may differ from year to year, we examined all US trademark applications that were concluded (either registered or abandoned) in a period of five years, between January 1, 2017, and December 31, 2021. During this period, a total of 2,848,988 applications were filed by 201,467 applicants – U.S. and foreign. The USPTO examined 2,391,624 applications, 1,491,634 were registered and 899,990 were abandoned. Our data team identified a total of 33,578 attorneys, at 28,217 law firms around the country as well as internationally, who worked on these applications. Compared to the 3,591 law firms that we identified in patent prosecution during the same period, this number is almost eight times higher. Since there is no requirement to pass the patent bar exam, more attorneys are able to file trademark applications. The following chart shows the number of trademark applications during the past five years:0 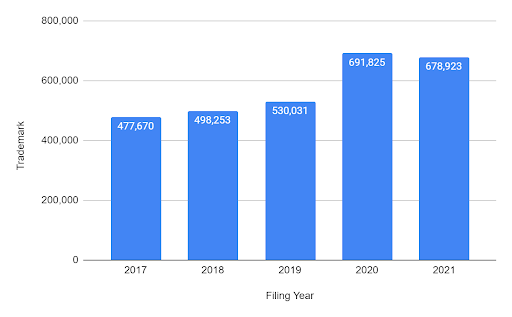 As seen above, the past two years have seen an increase in filings of over 30% when compared to previous years. The full Trademark Intelligence Report investigates the reasons behind these numbers. One of the key findings was that the Chinese entities came second after the U.S.-based ones when it came to filings with 522,138 filings or 18.3% of all filings in the past 5 years. The filings originating from China have been increasing over the past decade, but substantial growth has occurred in the last two years coinciding with the increase of filings in the USPTO.

Below is a list of some of the very best attorneys in trademark prosecution. They have earned a spot on this list either for their activity or performance, based on our ranking methodology explained further below. Being ranked among the top 300 out of 33,578 attorneys means that the attorneys mentioned below belong to the top one percentile.

The full Trademark Intelligence Report is also accompanied by the lists of the top 2,000 most active attorneys, law firms, and companies. For them, we provide different metrics such as the number of trademarks filed and registered, registration rate, pendency, office actions, oppositions, extensions, etc. These are also the metrics that helped us generate the activity and performance rankings based on the ranking methodology described below.

The large number of attorneys and law firms made the preparation of this report more challenging, as we had to clean the data and ensure the applications and registered trademarks were assigned to the correct attorney, law firm and owner. Data clean-up and entity name resolution remain our top priority. Using artificial intelligence and machine learning to extract the names of attorneys, law firms, or corporations for most of these reports has assisted in significantly reducing errors.

The Patexia Data Science team extracted several signals from the raw trademark data in order to construct the model and calculate different parameters that go into success and performance calculations. These signals were also previously analyzed by the trademark community through a survey we conducted before preparing this line of reports.

When it came to activity, Activity Score was calculated as the number of registered trademarks obtained by the trademark owners, law firms, or attorneys during the period of our study. This was further normalized based on the deviations of all numbers from the mean value and then adjusted out of 100 to present them in percentage.

Based on the feedback from our trademark community, we defined Success as a weighted average of the Registration rate, the number of Office Actions and also the number of Oppositions. However, we didn't base our performance rankings only on success scores. Judging only by the success score makes the comparison between entities with different activities unideal. As a result, we defined the Performance Score as a weighted average of both success and activity.

Stay tuned as in the following weeks we will be revealing important highlights and covering ANDA/Hatch Waxman litigation topics from our upcoming ANDA Litigation Intelligence Report 2022, which will be published in August.