Last April, we released our fourth annual Patent Prosecution Intelligence Report. This report not only evaluates and ranks all participating entities by activity and performance but also provides various patent statistics by analyzing the data at a high level. In previous weeks, we covered some of the most active and best-performing attorneys, law firms, and companies in Patexia 145, Patexia 142, and Patexia 140, respectively. Today we will look at the top trends based on the IPC codes and perform a comparative analysis with ten years ago.

An internationally unified patent classification like the IPC system has several benefits. Not only does it make the prior art search more manageable, but it can also be used to understand what type of patent application is being filed or granted. This can be used as a proxy for innovation trends as it shows the near future emerging technologies and products. For example, while 5G was made available to the public in 2019, the research and patent race between companies began years earlier, with several companies self-declaring extensive 5G patent portfolios at the moment it was introduced. Using our Patent Analyzer, we extracted data from all patents granted by the USPTO in 2021 as well as those granted ten years earlier in 2011. A total of 248,870 patents were issued in 2011, while in 2021, this number had grown to 364,713. This represents a 46.5% increase since a decade ago.

To better understand the patent landscape, we grouped the patents by their IPC subclasses for 2021 and 2011. Then we compared the data for the top 10 most popular IPC codes as shown in the following chart. Since the number of patents has increased by almost 50% over the last decade, we showed the data in percentage for a more relevant comparison. 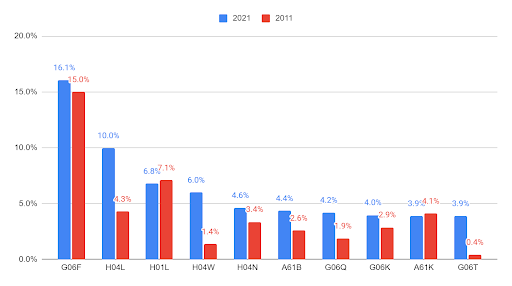 As seen above, three of the top ten codes belong to H04, covering electrical communication systems, and one to H01, which covers basic electric elements. Four IPC codes belong to the G06 class related to computing, calculating, and counting, while the remaining two belong to the A61 class related to inventions in life science. Eight out of ten IPC codes have grown during this decade compared to the 2011 data. That means they now take a bigger part of the total. H01L and A61K weight appears to have shrunk very slightly, meaning that they take almost the same or less percentage of total patents as in 2011. We should note that in absolute terms,  even H01L and A61K have grown almost 50% together with the rest of the patents (in 2021, we had almost 50% more patents compared to 2011).

In conclusion, IPC codes are a useful tool that can be used to analyze patenting trends. However, since patents come in the process of research and development before any product or service is even launched, the findings of the analysis could be used to understand future innovation trends better. Advancements require years of research, and patents are obtained before the technology is available to the public.