In late August we released our third annual ANDA Litigation Intelligence Report. The report covered the ANDA litigation landscape by providing high-level statistics as well as rankings of all stakeholders based on their performance and activity, including attorneys, law firms, companies, and judges. Similar to other reports, we have also included the lateral moves that have happened since the previous report was released. Today we will be covering some of the most important life science litigators who moved in the last 12 months. We will also show which firms are positioning themselves to gain more market share in the competitive life science litigation market.

To have a meaningful comparison, as well as compensate for the time required for each case from filing to completion (e.g., 6 to 36+ months), we covered a period of five years, from July 1, 2017, through June 30, 2022. During the period of our study, a total of 1,439 unique ANDA cases were filed with 1,531 unique patents involved. The following chart shows the ANDA filing trend, which includes the first half of 2022: 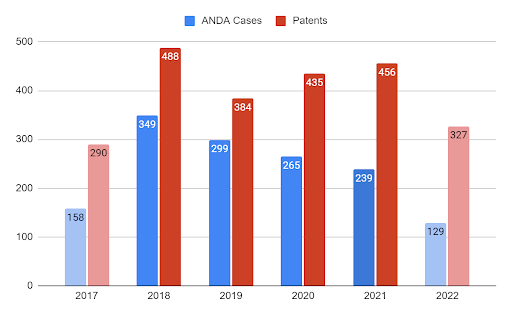 As you can see, the filings peaked in 2018 with 349 cases and have been declining in recent years, with half of 2022 showing an increase at 21.5 cases/month, higher than the 19.9 cases/month in 2021. We have observed increasing trends in IP litigation overall, but ANDA cases follow a different pattern as they depend on the number of branded drugs and new molecules whose patents are about to expire. In a list provided by Fierce Pharma, it looks like 2023 will be a major year for brand companies losing patent exclusivity, with Humira as a headline that expects several biosimilars to hit the market. This drug alone has generated almost $100 billion during the past five years for AbbVie. During 2022, sizable brands worth more than $17 billion in annual sales will also lose patent protection so generic drugs are expected to compete with them, and pharma companies are positioning themselves in the market. Revlimid of Bristol Myers Squibb and Velcade of Takeda are already facing competition from two FDA-approved generics. Vimpat of UCB also got its generic competitor, Lacosamide, earlier this year. Eli Lilly, which has been protecting its top seller Alimta in a number of patent cases, has also lost its patent protection since February this year. It is not certain how much these patent expirations will influence the total number of ANDA filings. However, it is safe to say that companies will be hiring the top litigation counsel available due to the importance of the drugs for their revenue. This also means that life science litigation will maintain its reputation as one of the most profitable types of patent litigation, and many law firms will position themselves to benefit from high profits and make the competition even harder among firms that have been established as major players in pharma litigation.

In our ANDA Litigation Intelligence 2022 Report, we identified a total of 1,857 attorneys who were named in one or more ANDA cases. Out of this number, 1,540 attorneys were identified as lead counsel and were representing defendants or plaintiffs, and the rest was local counsel, which is covered in a separate section of the report. There were 986 attorneys representing plaintiffs, while 767 represented the defendants in one or more of 1,439 cases filed from July 1, 2017, through June 30, 2022. Our source for assigning a case was ANDA documents. We rely only on the documents published through PACER. In addition to using computer algorithms for cleaning and normalizing the names based on many variables, we also reached out directly to every attorney we identified through the PACER website and ANDA documents.

By comparing the information we obtained from attorneys and law firms with those published in our 2021 report, we identified the ANDA lateral moves that took place since August of 2021. In the 2022 ANDA Report, we included a total of 65 lateral moves among the top 1000 most active attorneys. The following table highlights the top 25 lateral moves of 2021-2022 as sorted by their activity rank:

With 1,439 Hatch-Waxman/ANDA cases filed over the last five years (July 1, 2017, through June 30, 2022), ANDA litigation as one of the most profitable types of patent litigation makes about 10% of all patent litigation in US district courts. Using the above data, we calculated the net gain (number of attorneys joined/left) for each law firm participating in ANDA litigation. The following chart shows the top five firms with the largest growth or decline in ANDA attorneys: 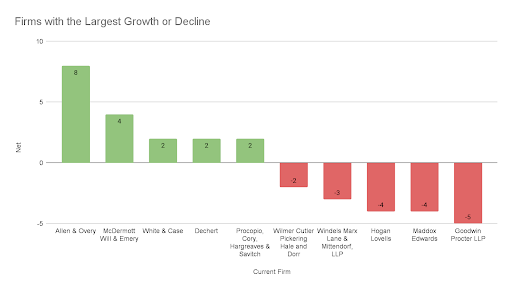 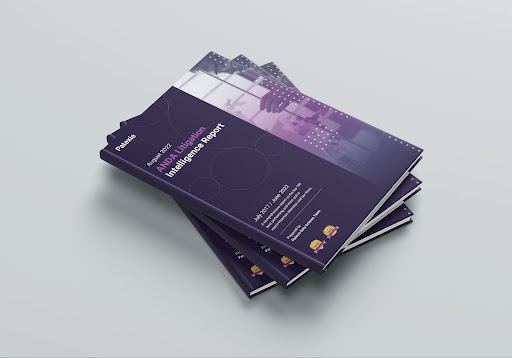 Our ANDA Litigation Intelligence Report goes further by providing an overview of ANDA from all angles. A separate section is dedicated to local counsel, law firms, and attorneys, and we further improved our ranking methodology based on the feedback from the ANDA community. The report is accompanied by an excel file covering all companies, law firms as well as attorneys ranked by their activity and performance.

Stay tuned, as, in the upcoming weeks, we will uncover more statistics from this report, as well as some of the top companies, law firms, and attorneys distinguished by their high activity or level of performance during the past five years.