Tomorrow we will release our 2022 CAFC Intelligence Report, where we have analyzed all the patent-related CAFC appeals from the USPTO, ITC, or district courts. The report covers a 5-year period, from Jan., 1, 2017, through Dec., 31, 2021, offering high-level statistics related to the patent litigation in CAFC as well as evaluating and ranking the best-performing and most active stakeholders.

CAFC has become more important post-AIA, mainly because of the volume of cases coming from the USPTO. In recent years, the number of cases brought before the CAFC went above 1,000 annually and had been moderately declining since 2016. In 2021 however, the decrease was significant and deserved some investigation using the data coming from our Litigation Analyzer tool. 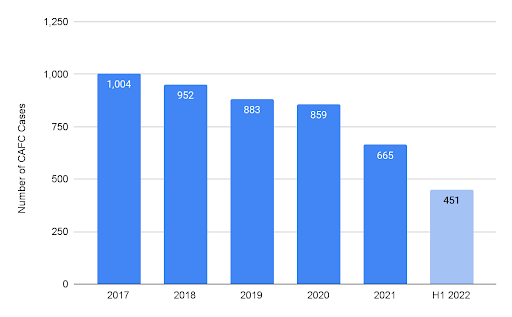 One of the major highlights we discovered in our first CAFC report was that almost two-thirds of the CAFC appeals originated from the USPTO, mainly from PTAB’s Inter Partes Reviews, which was covered at length in Patexia 119. The 2022 CAFC Intelligence Report data indicates that 61.4% of the CAFC appeals filed from Jan., 1, 2017, through Dec., 31, 2021, originated from USPTO. Appeals coming from the District Courts come in second place with 36.4% of the total. ITC brings a smaller share of appeals with 2.3%. The following chart summarizes this information per year. 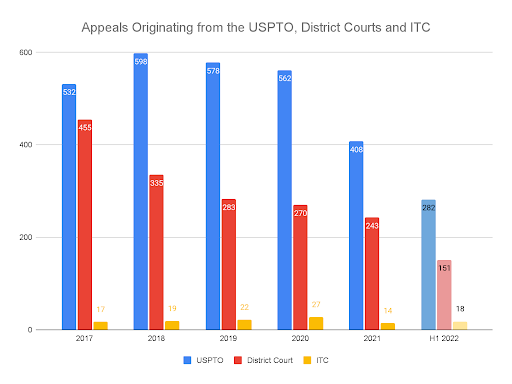 Noticeably, the appeals from the District Courts have been declining since 2017, with the most substantial decline of 26.4% in 2018 and minor declines in recent years. In 2018 however, as shown above, the total CAFC appeals declined only by 5.18% because, in the same year, the appeals originating from USPTO increased and covered a significant part of the decline coming from District Courts. Looking further into the 2021 CAFC decline, it’s observed that the district court cases stand at somewhat the same level as in 2020, while the cases originating from USPTO fell by 27.4%. As for 2022, the data from the first half of the year shows growth from both USPTO and district courts. Assuming that the pace in the second half of the year is the same as the first half, 2022 will be a busy year for the 19 CAFC judges, to whom we have dedicated a separate section in our 2022 CAFC Intelligence Report.
The above answers the reason behind the recent decline in appeals; however, again, using our Litigation Analyzer, we can go into more detail and understand the main drivers and reasons behind the decline in USPTO-originated appeals.

As we analyzed in Patexia 154, in the last five years, one-third of the terminated IPRs have been appealed in CAFC. However, the percentage has gone as high as 40% in 2020 and as low as 25% last year. This means there might be other factors. In 2021, for example, a total of 1,124 IPRs were terminated, which is 25.7% more than the 894 terminated in 2020. Knowing that the parties can appeal no later than sixty-three (63) days after the date of the final Board decision, this should have meant more CAFC filings throughout 2021. Instead, we still saw a decline which was majorly affected by fewer appeals from PTAB, as indicated above. The Litigation Analyzer again could shed light on this matter. 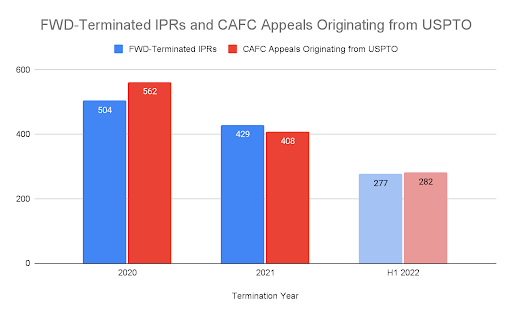 As we covered in our Patexia 150, an analysis of the IPR case outcomes showed that during the past five years, close to 38.5% of the terminated cases were denied, while the rest were settled or entered final written decisions. This is important for our CAFC appeal decline analysis since the Terminated-Denied decisions are not appealable by default unless there are extraordinary circumstances. Settled cases also do not usually proceed further with an appeal, given that all of the participating parties in the IPR proceeding have agreed to their conditions, and in most cases, the clause that prevents parties from appealing further is part of the settlement agreement. As data indicates, settlement decisions have increased rapidly during the past five years, while the cases that enter a decision have dropped from 42% to 35%. Most appeals come from this category of decisions, so it’s worth analyzing its trend. The above chart shows the cases terminated with FWD in 2020, 2021, and H1 2022. Notice that in some years, such as 2020, the CAFC appeals originating from USPTO surpass the number of IPRs terminated with FWD decisions. This happens for a number of reasons. First, there are appeals that come from the IPRs with other termination statuses. Secondly, there are additional appeals filed that originate from PTAB’s Post Grant Reviews which are viewed as a narrow alternative to IPRs given that they must be filed within nine months of the patent’s issue date which will be challenged. Lastly, decisions coming from TTAB, which is part of USPTO, are challenged at CAFC and add up the number of appeals. The ratio of appealed decisions also depends on the quality of the decisions themselves. However, given that the main driver of CAFC appeals is the IPR-originated cases, and from these last, only the cases that enter a decision, it is safe to say that the CAFC cases decline is partly caused by the fluctuations of the IPR decisions as shown above. As for the near future, there have been 277 FWD decisions in IPRs terminated during the first half of 2022, and consequently, the appeals at CAFC have increased as well, which makes us think that we will see a growth in the volume of appeals in 2022 compared to 2021. 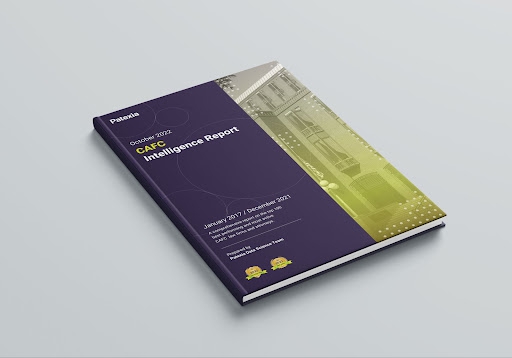 The full CAFC Intelligence Report further covers statistics related to the filing trends, outcomes, precedential vs non-precedential opinions, appeal originating party and court analyses, etc. Stay tuned, as in the following weeks, we will be publishing some of the very best companies, law firms, and attorneys participating in IPR cases during the past five years, as well as the stakeholders of CAFC litigation.