In late August, we published our third annual ANDA Litigation Intelligence Report. We evaluated the stakeholders for Hatch-Waxman cases filed between July 1, 2017, and June 30, 2022. This report's major highlights have been covered in our previous insights (Patexia 148: ANDA Litigation Grows in the First Half of 2022 and Patexia 151: ANDA Litigators Who Moved in the Last 12 Months). We have also covered the most active and best-performing companies, law firms, and attorneys in Patexia 152, Patexia 153, and Patexia 155, respectively. This week our insight will focus on some of the most active companies involved in patent litigation under the BPCIA act.

Small-molecule drugs have been the norm for much of medicine’s history. Since the Hatch-Waxman act was introduced, the public gained access to cheaper generic drugs, and the brand companies were provided the right incentives to continue their innovation. During the past decade, though, biotechnology was applied to a greater extent as an innovative tool in drug manufacturing. This resulted in an increase in large molecule drugs, also known as biologics, that received FDA approval. They differ from small molecules in many aspects, starting from size and manufacturing process and ending with costs and different processes to obtain FDA approval. Below is a chart that shows the latest data from FDA related to small molecules and biologics approvals, including the partial ones from 2022. 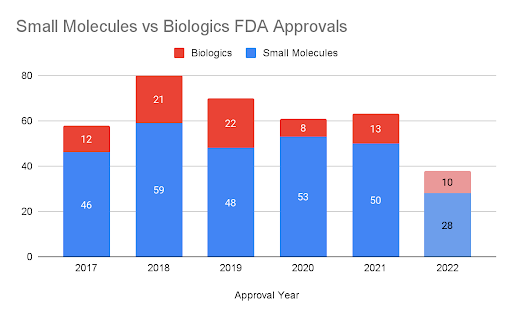 As seen above, biologic drugs make up 23% of the total approved drugs on average. Even in the market, small molecule drugs comprise 90% of all pharmaceutical drugs. However, the number of biological drugs is expected to increase due to several factors. First of all, their technical nature promises targeted treatment for a number of conditions. Until now, they have been unexplored due to technological challenges as well as some skepticism. Here it is worth mentioning that seven of the top ten best-selling drugs in 2022 are biologics. The Covid-19 pandemic, besides the many negative impacts, “forced” the pharmaceutical industry to innovate and explore methods such as mRNA, which brought the vaccines in a year from the day the coronavirus was sequenced, instead of 10-15 years that the regular vaccine development would produce them. Multiple lawsuits have been filed by major pharmaceutical companies, which have patented several aspects of the mRNA technology, which shows their importance for the future of their companies.

One major difference between small molecule drugs and biologics is the price, derived from different research and development costs. On average, small molecule drug costs about $1 per day, while biologics cost $22 daily. It is worth mentioning that generics cost just cents, and this fact was a major motivation for the BPCIA to be introduced in U.S legislation. As part of the Patient Protection and Affordable Care Act, President Obama signed the Biologics Price Competition and Innovation Act (BPCIA) back in 2010, aiming to bring for biologics a similar regime to that created by the Drug Price Competition and Patent Term Restoration Act (Hatch–Waxman Act). Under BPCIA, pharma companies may bring biologic drugs to market that are biosimilar to the ones that are previously approved. The process is facilitated since once biosimilarity is proven, the drugs can rely on the clinical studies conducted by the company that created the original biologic drug, otherwise known as the reference product sponsor (RPS). Additionally, patent disputes that may arise during the biosimilar drug development process are now litigated under the processes set up by the BPCIA.

Identifying the litigation under BPCIA from the thousands of patent cases filed annually in the U.S. has been proven difficult. Tens of thousands of complaint documents needed to be crunched for data extraction just to find the BPCIA cases. Then hundreds of thousands of documents still need to be examined to extract the attorneys, law firms, and judges involved, as well as to understand the case outcome. Thanks to Natural Language Processing (NLP) techniques combined with Machine Learning, Patexia has made it possible to highlight the cases litigated under BPCIA. We plan to include this next year in a special dedicated section of our upcoming ANDA Litigation Intelligence Report which will be re-branded as the Life Science Litigation Report. We also plan to highlight other life science patent litigation matters in the same report. 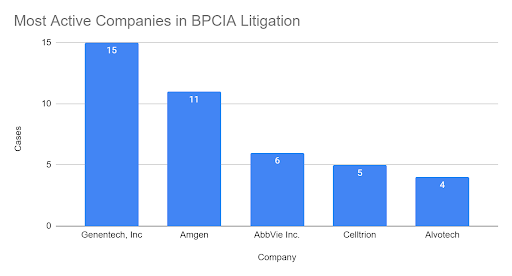 The number of companies involved in BPCIA litigation and biosimilar manufacturing appears lower than the expectations of people familiar with the Hatch/Waxman act and the number of pharmaceutical companies that bring generic medicines to the market. The reason might be due to the fact that R&D costs for their development are estimated to be as high as $5 billion, and not many pharmaceutical companies can afford that level of R&D investment. On the other hand, the number of companies that manufactures biosimilars should be higher since the BPCIA provides an abbreviated approval pathway similar to what Hatch/Waxman did for generics. While the market looks attractive since biologics represent 40% of total spending on prescription drugs, some difficulties are preventing the generics from entering it. Pfizer has providhttps://www.pfizerbiosimilars.com/biosimilars-developmented a good comparison between small-molecule generics and biosimilars. Development time and development costs are two factors that they have highlighted. Less than two years are needed to bring a generic drug to the market. Meanwhile, you need five to nine years for the biosimilars. As for the costs, $1 to $2 million are enough to cover the small molecule generic, while for the biosimilars, costs amount to more than $100 million. The difficulty in manufacturing is a factor that has to be accounted for as well. The molecular differences between small molecule drugs and biologics mean added complexity in the manufacturing process for pharma companies. Most biologics are proteins produced by cell cultures, while small molecule drugs are chemical compounds that are relatively easier to be produced.

Below are a couple of observations of the most active companies in biosimilar litigation:

With more biologics entering the market and generating record sales, such as Humira, more companies focusing on biosimilar manufacturing are expected to target them and file multiple BPCIA cases. Already several law firms have positioned themselves to benefit from these cases by hiring the best expertise and creating relationships with the top pharmaceutical companies. However, with more cases expected in the future, the competition in this type of litigation will also increase.

Stay tuned, as in the following weeks we will cover some of the best-performing and most active IPR firms based on our IPR Intelligence report published in September.