In late October, we released our second annual CAFC Intelligence Report. The report provided high-level statistics and insights and evaluated the stakeholders participating in the patent-related CAFC appeals originating from the USPTO, ITC, or district courts. Gathering data from three different sources in one place was not easy, but providing a complete picture of all CAFC cases related to patents was our goal, making this report valuable. Today’s insight covers some of the best law firms participating in CAFC appeals during the period of our study.

Similar to other Patexia Intelligence reports, this report covered a five-year period from Jan., 1, 2017, through Dec., 31, 2021, using the latest case updates from Sept., 25, 2022. A total of 4,363 CAFC appeals were filed during the last five years, and from this number, 4,002 had been terminated as of Sept., 25, 2022. The latest data from this year from Patexia’s Litigation Analyzer indicates that 731 appeals were filed as of Nov., 28th, which is already ten percent more than the 665 appeals filed last year. 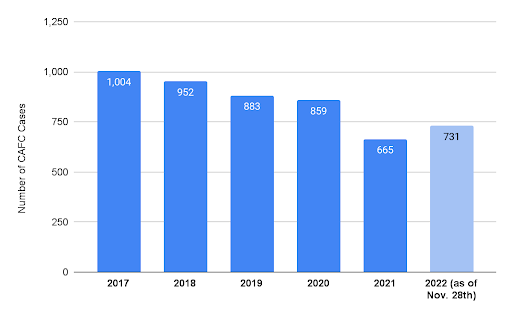 As seen above, the cases peaked in 2017 with 1,004 filings, then a moderate decline followed, with a sharper decline in 2021 as 194 fewer appeals were filed compared to the previous year. As revealed in Patexia 119, 60% of the appeals originate from the PTAB, mostly from the IPR proceedings. Although there should be some correlation between the IPR cases terminated and the CAFC appeals, in Patexia 154, we showed that the percentage of IPR decisions that were challenged in an appeal fluctuated from year to year.

Instead of being driven by the number of IPR cases filed and terminated, the analysis shows that the number of appeals mainly depended on the number of IPR proceedings that entered a decision, given that the denial of PTAB to initiate a proceeding is not appealable unless in rare circumstances. Patexia 158 covered, at length, the decline in appeals in 2021. However, the data from 2022 show a significant increase. If this increase continues, we may also see new lateral opportunities in this area.

Our data shows that a total of 1,124 law firms were involved in one or more of the 4,363 appeals filed from Jan., 1, 2017, through Dec., 31, 2021. Out of this number, 858 firms represented appellants, and 726 firms represented appellees, while some firms were active on both sides in different cases. On average, law firms representing appellants and/or appellees have been involved in 9.4 cases. However, our study found that a handful of firms have been extremely active, resulting in a large percentage of all cases being handled by a small number of firms.

In the following table, you will find a list of top law firms ranked because of their high activity or performance in CAFC cases. Being named on this list means that the law firm was in the top ten percent of 1,124 law firms.

The complete CAFC Intelligence 2022 further provides the full rankings of all entities and different statistics related to the CAFC appeals, originating courts, precedential vs. nonprecedential decisions, and ultimately outcome analysis which is the basis for our performance rankings. We have also included a list of lateral moves that have taken place since the publication of our first CAFC report in October 2021. 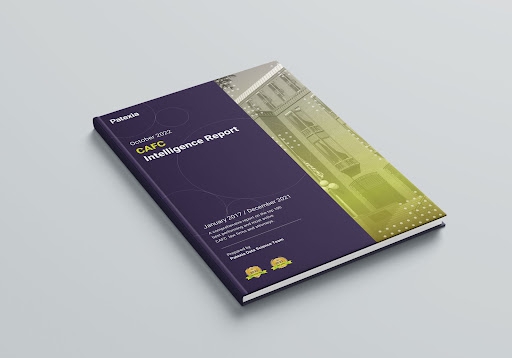 CAFC Intelligence 2022 was our second report covering all patent-related cases before the Court of Appeals for the Federal Circuit (CAFC). To find the best and fairest methods for evaluating the performance of companies, attorneys, law firms, and judges in CAFC cases, we used the feedback provided by the CAFC community.

The Activity Score was developed based on the number of cases in which companies and their representing attorneys/firms and judges, were involved as appellants, appellees, or both. As updates from the previous year, we included a weight system to differentiate cases from different years. However, most of the CAFC community argued that more recent activity is a better indicator that shows how active an attorney, law firm, or company is. Therefore, we reduced the weight of the older cases in the activity score, ultimately making it possible for an entity with 5 cases in 2021 to be ranked higher than an entity with the same number of cases but distributed throughout the period of our study.

For the Success Score, Appellants and Appellees were scored for various CAFC outcomes as follows:

According to our case-by-case analysis of CAFC cases and discussions with CAFC attorneys, the partial decisions, e.g., “Affirmed-in-Part, Vacated-in-Part, Remanded-in-Part,” were not easy to differentiate, and when it came to which side ultimately came out better from the CAFC appeal, the outcomes were mixed. However, the rest of the categories were self-explanatory, e.g., ‘Affirmed,’ ‘Reversed,’ ‘Vacated/Remanded’’ etc., so we allocated points accordingly.

The success scores, similar to our other IP Insight reports, were used to develop the Performance Score as a weighted average of activity and success scores. This additional scoring metric helps account for what most clients look for in an attorney:extensive experience and a high success rate on those cases. High case numbers will inevitably dilute performance over time, making it less than ideal for comparing the performance scores of firms/attorneys with very different caseloads. By taking these considerations into account, this new “Performance Score” allows us to score and rank companies, attorneys, and firms for both Activity and Success combined.

Stay tuned, as in the upcoming insights, we will be covering more statistics from this report, including a list of the top CAFC attorneys from the best law firms.