In March and April, we plan to release our Patent Intelligence Report and Trademark Intelligence Report, which will cover patent and trademark prosecution in the past five years. These two popular IP practice areas typically cover many more law firms and attorneys compared to other areas we cover such as PTAB, ITC, or CAFC.

After several years of research and hard work, our engineering team has automated the data extraction process from millions of documents available through the USPTO. The reports will identify and rank attorneys, agents, law firms, or companies that filed patent and trademark applications from January 1, 2018, through December 31, 2022.

As covered in Patexia 137, in 2020 and 2021, there was an unusually high volume of activity for trademarks. This trend is often a sign of innovation, the introduction of new products, and market expansion. It can also indicate an increased understanding and awareness of intellectual property, particularly trademarks, which prompts brand owners to register their marks. However, as concluded using our data, the trademark growth was largely attributed to Chinese entities who had increased their activity, especially in 2020 and 2021. The United States Patent and Trademark Office (USPTO) has conducted several studies on the increase in trademark applications over the past two years, as this trend has a significant impact on the USPTO's workflow, including the initial processing of applications, issuing office actions, processing responses to these office actions, and reviewing the validity of filings.

USPTO’s Director Kathi Vidal has highlighted the importance of reducing trademark pendency and has taken steps to limit the number of fraudulent applications, which are one of the causes for increased filing activity according to the USPTO. Several show cause orders were filed in 2022 by USPTO against Chinese companies that were accused of using the signatures of others improperly and providing false, fictitious, and/or fraudulent information in trademark submissions to the USPTO in order to conceal their unauthorized practice of law. How were these measures reflected in the trademark filings in 2022? The chart below summarizes the trademark filing activity during the period of our study: 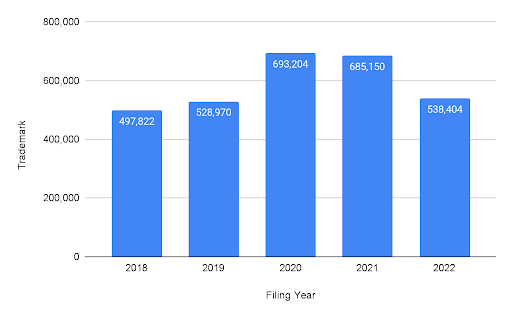 As seen above, the number of trademark application filings declined by 21% in 2022, but it remains higher than before 2020.

In the past five years, a total of 2,943,550 trademark applications were filed. The U.S. Patent and Trademark Office (USPTO) amended its trademark prosecution procedure in mid-2019, mandating that all applicants not based in the United States must work with U.S.-licensed attorneys to file and prosecute trademark applications. This move was made in an effort to address a recent increase in trademark filings from foreign entities. When the USPTO's changes went into effect, several attorneys were approached by foreign entities, primarily from China, seeking trademark prosecution services. These non-practitioner entities only wanted a U.S. counsel for their foreign-domiciled trademark customers, as the trademark applications had already been prepared by them. This led to attorneys not limiting their workload, resulting in a lack of ability to provide quality representation for their clients. On one occasion, the USPTO announced the suspension of the practice of U.S. attorney Jonathan G. Morton, a highly active attorney who has filed over 32,000 trademarks in the past five years. This event likely impacted the work of other attorneys in 2022, causing them to be more cautious about filings and take the necessary time to thoroughly review the validity of each application.

In our upcoming Trademark Intelligence Report, we will analyze various trends related to trademark filings, growth and decline by countries, anomalies such as the ones involving Chinese-originating applications, etc. The report will also evaluate all attorneys and law firms, featuring a ranking of the most active attorneys, law firms, and companies based on their activity and performance using our data-driven methodology.

The patent prosecution activity from January 1, 2018, through December 31, 2022, will be covered in our upcoming Patent Intelligence Report. To gain insights into overall trends, we examine patent filing and issuance activity. The USPTO only makes applications public 18 months after their filing date, so we use published applications as a proxy for filing activity during a given period.

As for the issued patents they have followed a similar trend, although the decline was only 0.94% in 2022 when compared to 2021.

The reasons behind these numbers belong to the realm of speculation, but one event that has most likely influenced the recent patenting trends is the COVID-19 pandemic and cost control in anticipation of upcoming recession. Given that the patent applications are published with an 18-month delay, the declines in 2021 and 2022 are attributed to the period of January 1, 2020, through June 30, 2021.

Some experts believe the fairly recent several Supreme Court decisions on patent eligibility including Mayo, Myriad, and Alice has at least been part of the reason for this recent decline. As analyzed in Patexia 79, there have been two major declines in patent filing activity since the year 2000, the tech bubble in the early 2000s and the financial crisis of 2008. It looks like the pandemic will be the third event in the past two decades that has played a role in the US patent filing trends.

In addition to identifying the most innovative cities and states in the U.S. based on patents issued and other filing-related statistics, one of the key findings in the previous report (as highlighted in Patexia 136) was that China became the second most active foreign country in terms of patent activity in the United States. According to the Patent Prosecution 2022 Report, which covers the period from 2017-2021, foreign entities on average accounted for 47.6% of total patents issued.

Stay tuned as in the following weeks we will highlight some of the statistics related to Patent Litigation Intelligence Report, which will be released at the end of this month.