Search
Pedram SameniJan 19, 2023Legal
Patexia Insight 165: Rise of Judge Albright: The Go-To Judge for Patent Cases and If That Ended in 2022

Next week, our Patent Litigation Intelligence Report will be released. The report covers the five-year period from July 1, 2017, through June 30, 2022, and reviews 18,493 district court patent cases. It evaluates all parties and their representatives. As emphasized in Patexia 123, a key aspect of district court patent litigation is the imbalance in case filings, with notable growth in a select few district courts, including the Eastern and Western Districts of Texas. We have identified several reasons behind this, as well as the presence of two of the most active judges in these districts: Judge Alan Albright and Judge Rodney Gilstrap. One of the highlights of the Patent Litigation 2023 Report is the dethroning of Rodney Gilstrap, with Alan Albright now being the most active judge for patent litigation nationwide.

Our analysis of case filings revealed that the Texas District Courts have maintained their growth, currently receiving 30.9% of patent litigation cases (almost a third) during the past five years. Texas is very active in patent litigation for a variety of reasons. One of the main reasons is that it has a number of federal district courts that are considered to be friendly to patent owners. This can make it easier to obtain relief in Texas than in other jurisdictions. Furthermore, Texas has a relatively business-friendly climate and a strong tradition of protecting property rights, which can make it an appealing location for companies to pursue patent litigation. Additionally, Texas has a large number of high-tech companies and research institutions, which can increase the likelihood of patent disputes in the state. Another reason is that Texas courts have shown a willingness to award substantial damages in patent cases, making it a more attractive option for companies seeking substantial financial compensation for their cases. Lastly, the top two of the most active judges nationwide, Judge Alan Albright and Judge Rodney Gilstrap, serve for the Western and Eastern Districts of Texas, respectively. Both judges have a reputation for being well-versed in patent law and for efficiently managing patent cases. This has made them highly sought after by patent litigators, resulting in a significant number of patent cases being assigned to them.

Raw data for 18,493 patent cases from PACER was analyzed. We counted 1,322 judges who presided over at least one of these cases in the five-year period covered by our study. The imbalance in case filings observed in the courts was also reflected at the judge level, as expected. It is worth noting that 16.9% of 18,493 cases were presided over by either Judge Alan Albright or Judge Rodney Gilstrap. They were the two most active judges for cases filed between July 1, 2017, and June 30, 2022. In the following bar chart, we display the total number of cases for each of the two judges for this period. 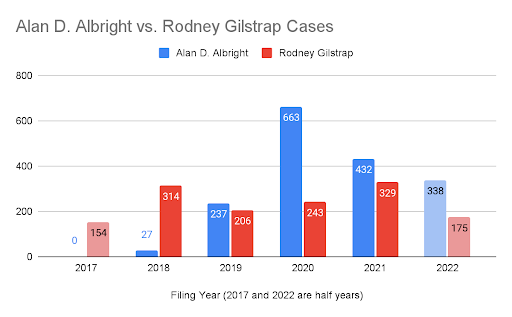 As seen above, with the exception of the year Judge Albright took office in September 2018, in all other years, he has handled more patent litigation matters than Judge Rodney Gilstrap, who had previously been the most active. The Eastern District of Texas is perceived as having a favorable patent litigation track record for plaintiffs, making it an attractive litigation venue. Additionally, the location of the court and the presence of high-tech companies and research institutions in the area are considered to contribute to increased patent litigation case filings. Yearly, the caseload for Judge Gilstrap appears to be relatively constant, between 200 and 330 cases.

On the other hand, over the past few years, the Western District of Texas has seen an increase in the number of cases filed by patent owners. Judge Albright has implemented a fast-track scheduling order that establishes deadlines beneficial to patent owners seeking prompt settlements and bypassing review by the PTAB. As a result, patent litigation cases filed in his district have skyrocketed since he took office in 2018. In 2020, he saw 663 cases (16.8% of total patent cases in 2020), a 180% increase from 2019, which helped him quickly surpass Judge Gilstrap.

In 2022, an effort was made to distribute cases to other judges when Chief United States District Court Judge Orlando Garcia issued an order. Effective July 5, 2022, all cases filed would be randomly assigned to all judges in the district. To understand the effectiveness of this decision and its impact on Judge Albright's caseload as well as those filed in the Texas Western District Court, we used our early data for 2022 through October 31, 2022. 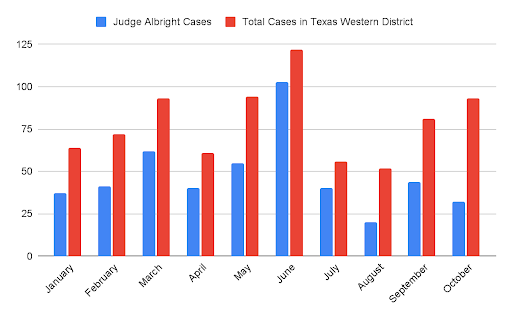 As seen above, up until July 2022, Judge Albright's cases accounted for more than half of the total cases filed in the Texas Western District Court, reaching a record 103 cases in June, or 84.4% of all 122 that were filed in that same month. In the months following the order that distributed the cases to all 12 judges in the district, it was observed that Judge Albright's share of the cases had decreased, however, it still remained at levels higher than the expected 8.3%, which should have been the percentage if the cases were distributed evenly to all 12 judges.

The Patent Litigation 2023 Report will further analyze the work done by judges. Besides activity, we have calculated and assigned a score based on the final conclusion of terminated cases, incorporating the outcome only for adjudicated (i.e. PACER “Judgment” category) cases. This helps us to detect which are the most favorable judges for the plaintiffs and defendants based on their decisions. 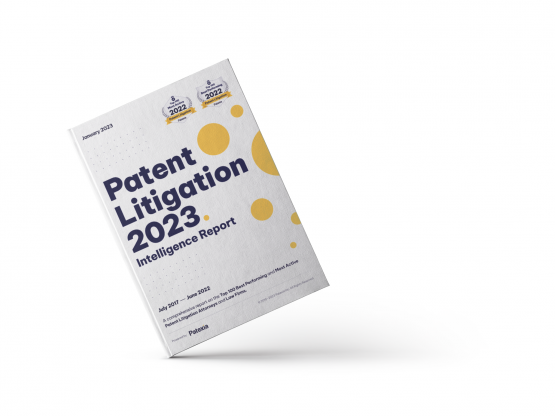 Stay tuned as in the following weeks we will provide more statistics and highlights from our Patent Litigation Intelligence Report, including some of the top entities during the period of our study.