Tomorrow, our third annual Patent Litigation Intelligence Report will be released, covering the period from July 1, 2017, through June 30, 2022. The report evaluated a total of 18,493 district court patent cases and reviewed all parties and their representatives. The report provides an analysis of high-level statistics and rankings of all parties involved by activity and performance. Last week, we covered how Judge Albright has become the go-to patent judge and the events that affected his numbers. Today, we will highlight some key findings from the report.

In the study covering 18,493 patent cases from PACER, we found that over a five-year period, 20,065 plaintiffs and defendants were named in one or more cases. These entities were represented by 3,608 law firms and 17,052 attorneys. A total of 1,322 district court judges presided over the cases, which were held in courts across the country. The lawsuits involved 17,377 unique patents, with some being litigated over 150 times during the period studied.

Over the past decade, various events have impacted the patent litigation process. The Leahy-Smith America Invents Act led to an increase in the number of cases filed and damages awarded, with figures surpassing $1 billion on multiple occasions. The implementation of the Patent Trial and Appeal Board (PTAB) and procedures such as Inter Partes Reviews initially led to a decline in patent litigation. Today, IPR proceedings have become a powerful tool for defendants in patent litigation cases. This shift in power has given accused infringers more options to invalidate patents. Additionally, while the Supreme Court rarely decides matters involving patent law, several of its decisions have had a lasting impact on patent litigation, either encouraging or discouraging parties from filing lawsuits. Examples of such decisions include Mayo, Myriad, and Alice. The chart below illustrates the number of patent litigation cases and unique patents involved during the period of our study, with 2017 and 2022 being partial years. 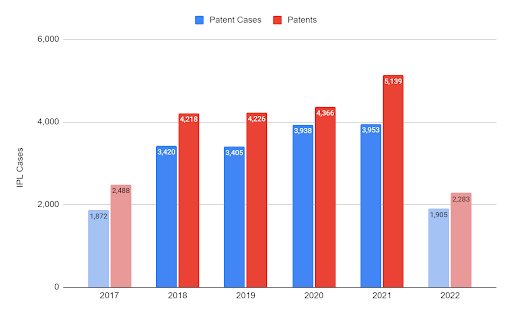 As shown above, the five-year period analyzed saw a peak of 3,953 cases in 2021, a minimal increase of 0.4% from the previous year. However, this increase is notable when compared to the number of cases filed in 2019 and 2018, which saw increases of 16.1% and 15.6%, respectively. Early data for 2022 shows 3,766 cases filed, indicating a decrease, but still at a level above those prior to 2020. Over the five-year period, a total of 22,720 patents were involved in 18,493 patent cases, averaging 1.23 unique patents per case per year. On average, 2.5 patents (non-unique) were involved per case. It is important to note that the figures for unique patents per year and non-unique patents differ, as the same patents may be involved in multiple cases. In one of our report sections, we show how several patents, have been litigated in over 150 cases.

Using data from patent litigation cases, this report analyzes the most popular states and districts for patent litigation. The imbalance in filings led to an examination of possible reasons and a dedicated section on District Court Judges, analyzing their likelihood to rule in favor of the plaintiff and their activity. The analysis also covers the statuses and outcomes of terminated cases, allowing for the observation of decision trends and ranking of entities based on their success in the case. The report also covers the most litigated patents and IPC codes, providing insight into the technologies most commonly involved in patent litigation.

Additionally, this report introduces the concept of "patent litigation families," grouping district court cases and cases from venues such as PTAB, ITC, and CAFC based on their patent, in order to provide a comprehensive view of patent litigation and their ultimate outcomes after any appeal to CAFC.
The ranking methodology has also been updated based on feedback from the IP community. Activity is measured by both the number of cases an entity participated in and the number of patents involved in those cases, with a logarithmic scale used to account for entities with varying numbers of cases. Success is evaluated based on the probability of winning all cases, and is adjusted for total activity.

Lastly, we continue to provide data about the top lateral moves among the 1,000 most active attorneys which offers insights into the movement of legal professionals within the field of patent litigation. This data can help to identify patterns and trends in the industry, such as which firms or companies are attracting top talent, or which areas of patent law are experiencing the most growth. 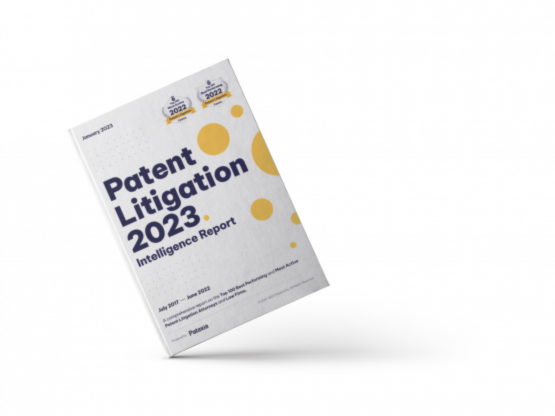 Stay tuned as in the following weeks we will cover key highlights from this report, including some of the very best companies, law firms, and attorneys based on their activity and performance rankings.