We released our first patent prosecution rankings for the top 1,000 patent firms back in March, which was based on the activity, efficiency and success rates of more than 5,400 firms. Since then, a number of companies have asked us to evaluate their outside counsel performance based on the work they did for them.

One of the key factors companies asked us to measure was delay in examination caused by the firm, due to numerous extension requests. We looked at the data from July 1, 2013, through June 30, 2018 (five years).

We then analyzed all the firms with at least one or more issued patents over the same five-year period. There were more than 5,000 firms. To improve the study’s relevancy, we limited the total number of firms to the 1,000 most active firms.

The following chart shows the top 10 patent firms with the lowest number of extension requests over the last five years. Patent Law Office of David G. Beck, a small firm located in Silicon Valley, CA, placed first in our study. The firm seems to have never requested a time extension over the five-year period of this study. The firm’s main client is Atieva Inc. (Lucid Motors), an electric company based in Newark, CA. However the firm also has worked with other companies, such as Logitech and Harman International. The firm obtained 125 patents over this period for its clients. 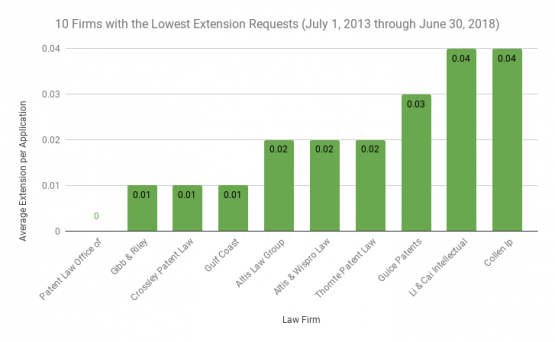 The following table summarizes the top 10 firms with the fewest number of extension requests over the five-year period from July 1, 2013, through June 30, 2018.

Similarly, we looked at the top 10 firms with the highest rate of extension requests over the five-year period (July 1, 2013, through June 30, 2018). Chicago IP Law, a small law firm based out of Naperville, IL, placed first with an average of 2.05 extension requests per application. The firm had obtained 134 patents for its clients during this five-year period. Sony and Japan Display are the top two clients of the firm. 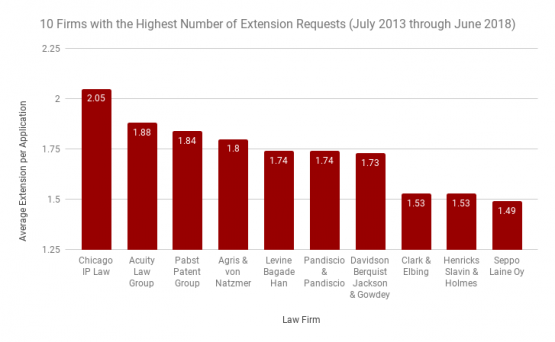 The following table summarizes the top 10 firms with the highest average number of extension requests over the five-year period of our study.

As we explained above, this is just one metric our clients consider. It does not necessarily reflect the quality of the firm. This metric varies substantially based on the subject matter and the goal the client is seeking (e.g., obtaining the broadest claim possible). But companies are extensively using data to understand how their patent counsels are performing and how they stack up to other law firms when it comes to different performance and efficiency metrics.

Patexia launched its Concierge Program last month in response to the ongoing need of patent attorneys (in-house and law firms) for IP insights. This annual subscription program provides access to numerous charts and statistics related to litigation and prosecution of more than 70K attorneys, 15K examiners, 20K law firms, and 600K companies. Our corporate clients use the information to evaluate and select their counsel and law firm clients for business development activity as well as interactions with USPTO examiners.

We also provide countless statistics and charts under our custom IP reports. With this release, we rebranded our popular Patexia Chart articles to Patent Insights Series to better reflect our mission of bringing transparency and efficiency to IP.

In the following weeks, as in prior years, we will gradually reach out to our law firm partners, asking them to verify their IPR stats for our 2019 IPR Intelligence Report, which is planned to be released in the third quarter of 2019. Stay tuned...

Disclaimer: The data for this study was obtained from public sources, including USPTO Patent and Examiner Dataset. Patexia has gone to great lengths to provide valid and accurate analysis based on this data. However, Patexia does not guarantee 100 percent accuracy nor take any responsibility for possible losses caused by use of information provided in this study.