After many years of continued decline, we observed for the first time, a significant reversal in the trend in the second quarter of 2019. In Q2, a total of 1,013 patent lawsuits were filed in U.S. District Courts across the country, which was 22 percent higher than the 828 cases filed in the first quarter of 2019. While it is too early to call it a full reversal, it certainly calls for more research and analysis of the IP sector to find out if this was only a one-time uptick or something else is forming. Back in April, in Patexia Insight 60, we reported that activity of non-practicing entities (NPEs) and litigation funds was on the rise as they were taking advantage of the distressed patent market to acquire assets at a lower cost. Quarterly numbers may suggest that some of those acquisitions are finally making their way into courts for the next phase of their monetization cycle. 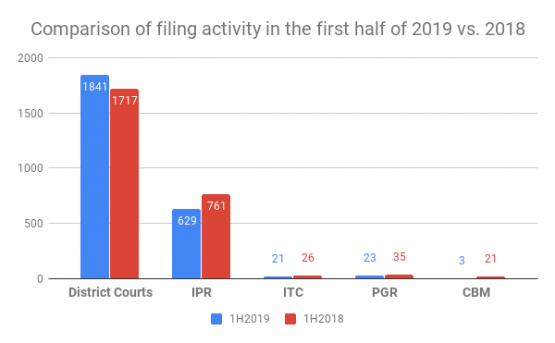 Low interest rates, which have fueled excessive borrowing and increased corporate debt, have helped improve the market conditions and economy in many sectors over the last few years. Litigation in general and IP, specifically, has almost zero correlation with financial markets, which makes them ideal for investors to diversify their assets, especially in fear of possible recession in the next 12 months. As a result, litigation financing has got some attention and has received an inflow of fresh capital in recent years. Many new litigation financing funds have formed in recent years (e.g., GLS Capital, Soryn IP Group, LexShares and Parabellum Capital), and the older ones have also expanded their IP litigation division as the ROI (return on investment) for good investment is comparable or sometimes much more than the best investments by venture capital funds.

Some of the NPEs, such as Acacia Research and WiLan (Quarterhill), have gone through some restructuring recently. Acacia Research quietly brought back Marc Booth in last August, who is now the Chief IP Officer (CIPO) of the company and has started rebuilding the team. WiLan also went through a similar restructuring back in December, and Michael Vladescu, who was the Chief Operating Officer (COO) of WiLan, has become the new President and CEO as of March. He is known to be more in favor of licensing as opposed to litigation. The company has already signed a couple of lucrative licensing deals with NVIDIA and SK Hynix.

All of these changes in the macro environment combined with IP specific changes such as change of the director at the USPTO, Senate Hearing on Section 101 issue and special attention of the Trump administration on IP issues, specifically in regards to China, has given new hope to patent owners and may gradually swing the pendulum to the other side.

In the first half of 2019, a total of 1,841 new cases were filed in all U.S. District Courts, which was 7 percent more than the same period in 2018. During the same period, the number of Inter-Partes Review (IPR) petitions dropped from 761 to 629 (i.e., a 17 percent decline). This was expected as there is always a lag of 6 to 12 months between IPR and District Courts activities. IPR usually follows the same trends after about a year. Our Data Science Team is working on the release of our third annual IPR Intelligence Report, which is planned for around mid-August.

During the same period, IP cases related to International Trade Commission (ITC) were more or less unchanged (21 cases in the first half of 2019 versus 26 cases in the same period in 2018). Patexia Data Science team has recently been working with a number of companies who had reached out to us and asked to evaluate law firms and attorneys for ITC matters in order to help them select the right counsel for their possible upcoming cases. Based on that, we believe there may be more activity in the coming months on the ITC front as well. We are planning to release our ITC Intelligence Report in September, ranking the firms and attorneys in ITC for the first time. Law firms and companies can pre-order both ITC and IPR Intelligence Reports now on the Patexia website.

As usual, we also looked at the status of IPR cases. As of the end of June 2019, a total of 9,553 IPR petitions have been filed. About 13 percent of the cases are still pending (submitted, instituted, etc.). We now consider all claims listed in a case as pending until the Final Written Decision (FWD). This is based on the recent decision by the Supreme Court: SAS Institute Inc v. Iancu. Accordingly, we do not give any weight or additional points to Instituted Cases when we measure the performance of the law firms or attorneys representing either petitioners or patent owners.

As of July 8th, about one-third of all IPR cases have been denied institution, while about 18 percent have been settled and 30 percent have reached the final written decision. 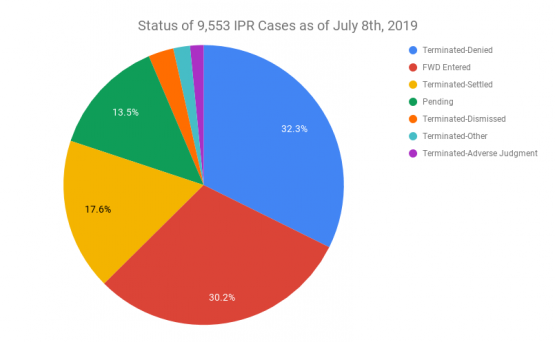 In the first half of 2019, we also observed a major shift in venue selection when it comes to filing patent lawsuits. The Eastern District of Texas, which was by far the most favorable venue for filing patent lawsuits by plaintiffs for many years, has gone out of favor after the fairly recent Supreme Court decision on TC Heartland v. Kraft Foods Grp. Eastern District Court is now in the fourth position in terms of activity. Delaware, California Northern, and California Central have taken the first, second, and third positions, respectively. 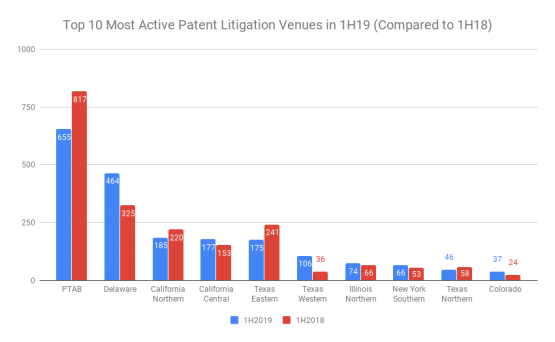 In the following weeks, we plan to dive deeper into ITC cases as we prepare to release our first ITC Intelligence Report later in the third quarter. Stay tuned.