A couple of weeks ago, we reported the quarterly numbers for patent litigation. To our surprise, we noticed a 22 percent jump in district court patent litigation in Q2 compared to Q1 of 2019 (Patexia Insight 64). This happened after several consecutive years of decline in patent litigation. Further conversations with in-house counsel at multiple corporations confirmed that the number of demand letters have also increased in the first half of this year. A couple of in-house IP counsel had reached out to us to help them with the process of selecting their next counsel for a U.S. International Trade Commission (ITC) Section 337 Investigation. This prompted us to take a closer look at about 500 ITC matters filed over the last decade in order to evaluate law firms and attorneys involved in ITC. The filing has fluctuated between 40 and 70 per year. 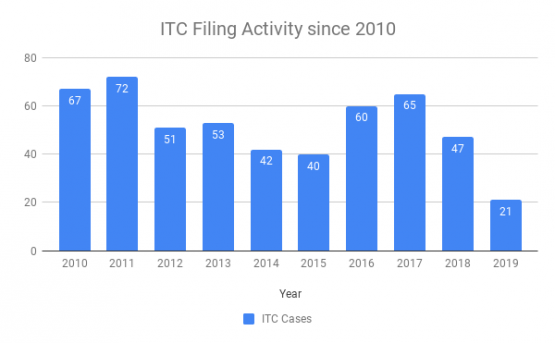 As we reported in Patexia Insight 64, activity by Non-Practicing Entities (NPEs), as well as litigation financing funds, is gradually rising. Several 8-figure deals were closed in the first half of 2019.

Intel is looking for a buyer in a potential mega-deal to liquidate its 8,500 5G modem and other related patents as it exits the market. There are rumors Intel is looking for a 9-figure deal, potentially between $250M and $500M. That price tag keeps most of the traditional NPEs out of play (assuming Intel was open to sell to an NPE). Given the sensitivity of the technology and ongoing trade and IP issues with China and Chinese companies, the target buyer most likely will be a U.S.-based company.

IAM reported that Apple may be the unnamed bidder with the exclusive opportunity to review the assets ahead of finalizing a deal.

We also discussed that fear of a possible recession in the next 12 months may even increase the IP activity further. The IP market is not coupled to the stock market and, as a result, it is recession proof, which can be seen as an opportunity for investors to invest their money in anticipation of recession down the road.

As IP litigation activity is on the rise again, the choice of litigation venue becomes important. Post-AIA, PTAB, and, in particular, IPR have added to the complexity of district court litigation. In general, PTAB had a negative impact on the success of plaintiffs in district courts. In many instances, PTAB made it more expensive and more difficult for firms to take new patent cases on contingency. Most district court cases are now followed by an IPR.

This change in complexity and cost can make ITC an alternative choice and, in some cases, more attractive. ITC complaint is an extremely lengthy and detailed complaint compared to district courts. But in general, data suggests that ITC may be more patent friendly in a post-AIA environment.

Section 337 investigations conducted by the U.S. International Trade Commission most often involve claims regarding intellectual property rights, including allegations of patent infringement and trademark infringement by imported goods. The success rate is generally quite high and has been improving. Additionally, it is much faster than district court cases (i.e., about 12-16 months vs. multiple years).

While no monetary damages exist in ITC,  complainants can bar the respondents from importing infringing products. This potentially can be used as a strategy to demand a higher monetary damage, assuming there is a related district court case filed in parallel with ITC.

In terms of cost, we have heard different numbers. But in most cases, ITC cost falls between $3M and $5M, although sometimes it’s more. In general, the process is quite labor intensive, once the target date for final determination is set by the commission (i.e., about 10 months of intense work). Consequently, not all law firms have the experience or the right team to work on ITC matters. This adds to the complexity of ITC, as it requires skilled ITC attorneys.

Typical district court cases may cost about the same, but they span over the course of 2-3 years (and sometimes even more). This longer timeline makes the initial investment easier for companies, because they do not need to come up with the capital right away.

On the other hand, ITC cases require a big investment within 10-12 months. During the same time, law firms should also be prepared to allocate a large bandwidth to a single case. That is one of the main reasons many law firms, especially the smaller ones, are not prepared to take ITC cases.

The following table summarizes some of the pros and cons of ITC Section 337 Investigation.

Since 2010, a total of 518 ITC Section 337 Investigations have been filed. The following chart shows the type of unfair act for all matters during this period. About 90 percent of all cases are patent related, while the remaining are categorized under trademark, trade secret, and other unfair acts. 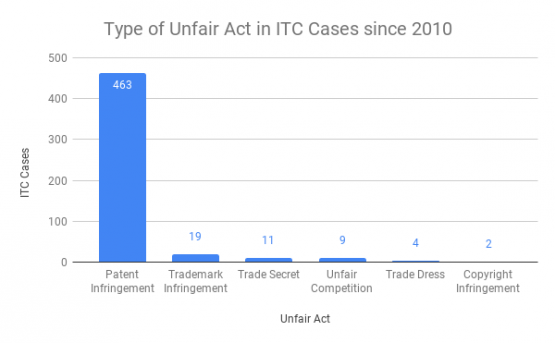 We think as victory for patent owners and plaintiffs in district courts has become more difficult in the current environment, ITC may become an alternative litigation venue for those patent owners who have the capital and see the potential return, specifically for products covering a large market. While ITC does not offer monetary damages, the exclusion orders enforced by the U.S. Customs & Border Protection is a powerful way that could be leveraged in settlement negotiations and increase the return on investment (ROI).

We are planning to release our first ITC Intelligence Report in late September or early October. The firms who have been involved in ITC Section 337 Investigation have already been contacted or will be contacted in order to verify and confirm the data related to their firm or attorneys. Stay tuned...