Last week we reviewed the firms with the largest decline in their IPR activity over the last five years (2014 to 2018), attempting to find a theory behind each drop. As we discussed, many larger firms with little to no involvement in IPR in early years, have started expanding their PTAB practice in recent years, grabbing more market share.

This week, we are going to review the five firms with the largest increase in the number of IPR cases over the last five years (2014 to 2018).

We reviewed more than 1,000 law firms with IPR activity over the last five years, looking at their growth (change in percentage as well as in absolute number of cases) during this period. Because many law firms just had a small number of cases (e.g., only 1 or 2 cases), measuring the percentage of growth did not give us any valuable insight. We then decided to identify the five firms with the maximum increase in the total number of IPR cases they handled from 2014 to 2018. 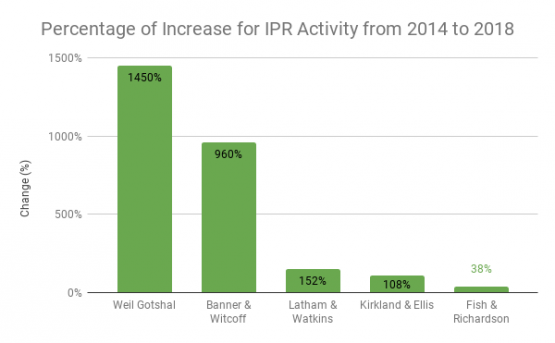 Banner & Witcoff ranked second with close to 10 times growth in five years. Its activity grew from 5 cases in 2014 to 53 cases in 2018. Aside from its substantial growth, the firm also has been ranked as one of the best performing firms in our annual IPR reports for multiple years, especially on the patent owner side.

Latham & Watkins and Kirkland & Ellis, two other top litigation firms, took the third and fourth positions, respectively. The volume of IPR work at these firms more than doubled in five years.

Fish & Richardson ranked fifth with a moderate growth of close to 40 percent in five years. As you can see in the following chart, Fish has been quite active since the early days, and it still is the most active firm for overall IPR activity. Considering that, the firm’s results are quite impressive, as it has managed to grow its already huge pie by about 40 percent in five years. On average, the firm handles about 200 IPR cases per year, which is more than 10 percent of all annual IPR cases. 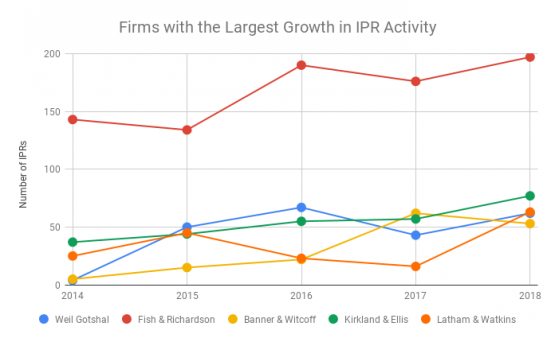 The following table summarizes the percentage of growth as well as the absolute change in the number of cases for the above five firms.

We analyzed the clients for each of the above firms to find the origination of the expansion.

Weil Gotshal seems to have received quite a lot of work from three companies over the last five years. The firm handled close to 120 IPR matters for Micron/Intel (54), General Electric (35), and Altria Group (25). These clients helped increase the activity of the firm substantially over this period, especially in 2016 and 2018. Aside from its major clients, the firm seems to work with a healthy range of clients, just handling smaller volumes of work for each of them.

The main source of IPR work for Banner & Witcoff seems to originate from its patent prosecution practice. The firm obtained close to 13,000 patents for its clients over the last five years. Based on the Patexia Patent Intelligence Report released in March, the firm was ranked as the 12th Best Performing firm for patent work and one of the most active firms for patent prosecution.

Comcast and Nike, which are among the firm’s long term clients for patent work, are also the two top clients for IPR work. The firm handled more than 100 IPRs for its top 3 clients: Comcast (80), Nike (14), and Kathrin USA (14). The firm also has been among the Best Performing firms for IPR based on Patexia IPR Intelligence reports over the last few years.

The IPR workload for Latham & Watkins has fluctuated over the past few years, but it peaked in 2018. The firm seems to take over the IPRs related to district court cases handles for its clients. Among its clients are Apple, Actifio, Nvidia, and Par Technology.

Kirkland’s top IPR clients are Intel and IBM. But the firm’s client list is quite large, and it seems that none of the clients provide a large percentage of the firm’s overall IPR revenue. As you can see in the above chart, the firm’s IPR work has been growing every single year since 2014.

What are the key changes in IPR Intelligence Report in 2019?

There are several changes and updates in this year’s IPR Intelligence Report. First of all, we have removed the cases with Instituted status from the performance ranking calculation. This was done after the recent Supreme Court Decision: SAS Institute vs. Iancu, as, once an IPR petition is instituted, all claims listed in the original petition will be considered by the panel of PTAB judges. Therefore, it didn’t make sense to give any points to any side (e.g., petitioner) while waiting for the FWD Decision.

Second, similar to prior years, we have limited the performance rankings to those firms (or attorneys) that had at least 40 total cases (or at least 20 cases representing the patent owner or the petitioner) over the last five-year period. But unlike last year’s report, this is not limited to non-pending cases. As long as a firm or an attorney has been involved in a minimum number of cases, even if some of those cases are pending, we have included them in the rankings. This helped us rank more firms and more attorneys.

As a result, this year we have expanded the ranking to include the top 100 firms and top 100 attorneys in different categories (instead of the top 50). Many attorneys asked us to rank up to 100 top attorneys, because there are more than 5,000 attorneys and the top 100 only represents the top 2%, which is quite impressive.

In addition, as some of our clients (especially corporate clients) have requested, we are also including an Excel file covering the top 500 companies, firms and attorneys in different categories. Firms or attorneys ranked above 100 will not receive any badges. However, we decided to include them, as some corporate clients wanted to know the scores of their attorneys or firms and how they stack up to other firms/attorneys, regardless of their rankings (e.g., if they are not among the top 100).

The report is scheduled to be released later this month and currently can be pre-ordered online.

In the next couple of weeks, we plan to review the attorneys with the largest change in IPR activity ... stay tuned.