We attempted to find the sources of the change in the workload by analyzing the clients, attorneys, and other factors that might have contributed to the firm’s growth or decline in business or in the relationships with their clients.

This week, we turn our focus to IPR attorneys. We will list the top five attorneys with the highest growth in the last five years (2014 to 2018), and we will examine their caseload.

From 2014 to 2018, more than 5,700 attorneys were named on one or more IPR cases, representing either the petitioner or the patent owner. Most of these attorneys worked only on one or a few cases over this period.

To glean meaningful results, similar to our earlier studies, we decided to look at the absolute number of IPR cases each attorney had been involved in, in 2014 and then compare that to his or her caseload in 2018. This is more useful than analyzing the percentage of growth from 2014 to 2018, as it only takes one extra case to have a growth of 100% for an attorney who had a single case in 2014.

The following chart shows the top five attorneys with the largest change in IPR caseload from 2014 to 2018. 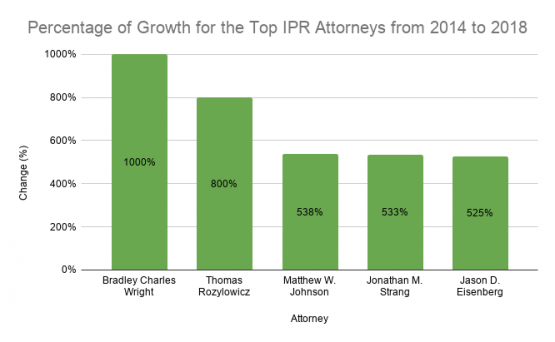 In the chart, we listed the growth as 1,000% as a placeholder, because we could not calculate the actual growth (i.e., we could not divide by zero).

Congratulations to Brad! His top clients during this five-year window were Comcast (89 IPRs) and Centripetal Networks (12 IPRs).

The following chart shows the annual activity of these five attorneys from 2014 to 2018. 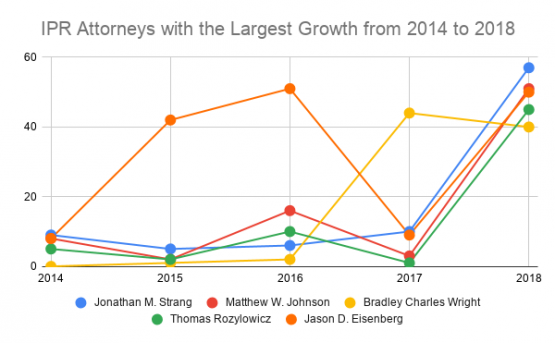 The second attorney on the list is Tom Rozylowicz, a principal in the DC office of Fish & Richardson. As you can see in the above chart, Tom’s caseload was moderate in the first four years (between 1 and 10 IPRs per year). But in 2018, it jumped to 45 IPRs. In 2018, the majority of Tom’s IPR work came from representing Apple (32 IPRs) and Samsung (11 IPRs).

Matt Johnson, a partner at Jones Day, is ranked third on our list. His caseload also went up substantially in 2018 (51 IPRs). The majority of Matt’s cases in 2018 were related to Apple vs. Qualcomm, as he represented Qualcomm in about 30 IPRs. (Interestingly, these are primarily the same cases for which Tom Rozylowicz from Fish represented Apple.)

Jonathan Strang, who is counsel at the DC office of Latham & Watkins (joining the firm in 2016 from Sterne Kessler), ranked fourth on our list. He is now the second most active IPR attorney at Latham, trailing only Bob Steinberg, who is the current chair of PTAB practice at Latham. Jonathan was named in 57 IPRs in 2018, and his workload came from many clients of the firm.

The following chart shows the change in the activity of these five attorneys from 2014 to 2018.

The complete list of the top 500 IPR attorneys will be released as part of this year’s IPR Intelligence Report next Thursday. This week is the last week that the report can be pre-ordered at the discounted price before its scheduled release.

In the following weeks, we plan to cover some of the best performing attorneys, shedding some light on their practices and on their paths to success.