A few weeks ago, we released our 3rd Annual IPR Intelligence Report. Several companies asked us to further explain how to use the Excel file came with the report for counsel selection. They also asked us if we could provide them with the performance of their IPR counsels, as it relates only to their cases.

First of all, we decided to provide complimentary evaluation of IPR counsel for all the companies who purchased the IPR report or are currently a member of the Patexia Concierge Program. Secondly, as a case study, we decided to review and evaluate the performance of Apple’s IPR counsel over the last five years.

As of September 1, 2019, Apple has been involved in 454 IPR cases. That is approximately 5 percent of all 9,781 cases filed since September 2012 (inception of IPR). In the majority of these cases (448 cases out of 454), Apple has been a petitioner, challenging the validity of claims in 274 patents. The following bar chart shows the status of the 448 cases where Apple was the petitioner. 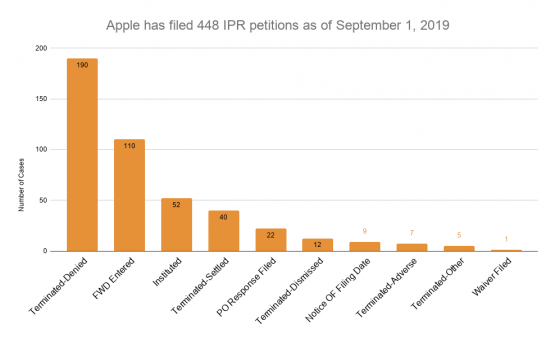 Over the last five years (from July 1, 2014, through September 1, 2019), Apple has filed 407 IPR petitions, of which 299 have been settled, denied, or reached the final written decision. We consider these cases completed. Now we will look at the law firms and attorneys who represented Apple in one or more of these 299 cases. 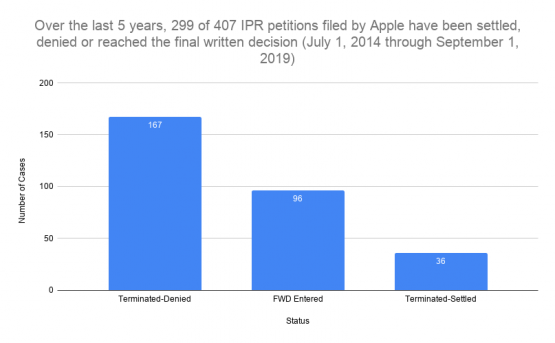 To evaluate the performance of Apple’s counsel, we use the same point allocation method we used in our annual reports, as shown in the following table:

We assume Apple or its counsel has won the case if the case was settled. This is because Apple usually files these petitions as a defense strategy in district court patent lawsuits. A settlement usually means the plaintiff in the district court case felt the prior art was strong and saw no reason to continue the fight before the PTAB (we are currently having a survey, asking the IPR attorneys to whether we should keep it this way to modify it).

If a case reached the final written decision, we split the point between Apple and the patent owner, based on the ratio of claims invalidated and claims survived. Although in some cases, even if a single claim that was part of the district court lawsuit is survived, that may be seen as a victory for the patent owner, as they can continue with their case and potentially claim damages.

Based on the above methodology, Apple’s overall score for all the 299 IPR cases was 37%. Apple used attorneys from 32 different law firms for these 299 cases. During this process, Apple challenged 3,374 claims from 189 patents. 1126 claims or about ⅓ of challenged claims were invalidated. The following table summarizes the performance of the five law firms who represented the company in the majority of IPR cases (i.e., Apple’s first five choices when it comes to IPR).

The first five firms represented Apple in 221 of 299 IPR cases, or almost 75% of the cases. Among these five firms, Haynes and Boone has by far the best performance with a score of 70%.

While some other law firms who represented Apple, had a performance of 100%, holding such a great performance in more than 30 cases is quite impressive for Haynes and Boone. We reported in Patexia Insight 69 that Haynes and Boone is among the best performing IPR firms. The firm has been the 10th most active law firm with 231 IPR matters over the last five years. It was ranked the 12th best performing firm for representing petitioners. Again, managing to keep the performance high for more than 230 cases is quite difficult.

Analyzing the same data at the attorney level, we found that a total of 189 attorneys had represented Apple in one or more of these 299 IPR petitions. The following table summarizes the performance of the five most active attorneys over the last five years.

If you are an attorney working for a law firm and have been named in one or more IPR cases over the last five years, most likely you received an email from us earlier this week, asking you to participate in a short three-question survey to help us improve our performance metrics.

After we released our 3rd Annual IPR Intelligence Report, several members of our community who reviewed the report, reached out to us with some valuable feedback. This prompted us to rethink some aspects of our methodology and to consider some changes for next year. Here we will summarize the feedback and encourage you to cast your vote here, benefitting all stakeholders in PTAB and IPR. Your participation is important!

1. Points for IPR Settled Cases
For the past three years, we assumed a settled case is a victory for the petitioner. Obviously, attorneys on the patent owner side do not like this point allocation. And we agree that in some cases, settlement does not mean the patent owner had no other option for victory.

But our understanding is that in the majority of cases, when an IPR is settled, it is a sign that the petitioner’s prior art was strong. And the patent owner decided to settle rather than continuing the fight and burning cash.

We decided to listen to our community as we prepare to fine tune our algorithms and performance metrics for next year’s report. Do you think a settled IPR should be considered a victory for the petitioner?

2. Extra Weight for Experience and Activity
For the last three years, when compiling the performance scores, we applied a cut-off threshold (e.g., a minimum of 40 concluded cases in five years). Anybody above that threshold was included in the rankings, and anybody with fewer cases was not included.

While it generally makes sense not to compare an attorney with a single case with another attorney with 100+ cases, some potentially unfair scenarios still arise. For example, in general, if two people have the same score but one has been involved in 100 cases and the other in 50 cases, the one with more experience (or activity) deserves to be ranked higher (even if his or her score is slightly lower).

We are considering adjusting our performance score function to create a weighted function that takes into account the activity level. In other words, having a higher activity, in general, would create some positive weight on the performance score. Do you agree?

3. Cases with invalided but amended claims
In some rare cases, the PTAB judge may determine that the challenged claims are unpatentable, while accepting new claims to replace the invalidated claims (which are automatically considered patentable).

For example, check IPR2018-00698. Should we consider this a win for the patent owner, as the patents came out of the IPR as valid and the co-pending litigation can continue forward? Or shall we give half a point to the petitioner, who most likely managed to narrow the scope of new claims to some extent by invalidating the original claims?

What do you think? Please take a moment and cast your vote.

How to Use the Excel File in the IPR Intelligence Report
For the first time this year, our IPR Intelligence Report comes with an Excel file where we list the performance and other metrics for up to the top 500 most active attorneys, law firms, companies (and judges), on both petitioner and patent owner sides.

First of all, companies can find the attorneys or law firms representing them and check their scores and rankings. Second, if they are considering other firms or attorneys for a new case, they can see how their current attorneys stack up to others and whether it makes sense to use a new counsel for their new case.

Patexia provides custom analytics and can analyze and make a recommendation, not only based on the performance for patent owners or petitioners, but also for the type of technology (e.g., based on the IPC or patents ever challenged in IPR).

What is next?
Next week, we will turn our attention to one of the most challenging areas in IP: patent mining and infringement discovery. Over the last several years, our data science team has developed several very powerful AI-based tools that crunch the U.S. patent and lawsuit data to identify weaknesses and strengths of a patent portfolio.

For the first time, we reported our quality metrics in the Patent Intelligence Report, which we used to measure the quality of a patent portfolio based on 30-40 factors. We have now expanded that and use neural networks and AI-based solutions to assist our clients with portfolio gap analysis, patent mining, and infringement discovery for monetization, in-licensing or out-licensing.

We are very excited about the prospects of this research and already have clients speaking to us about this powerful tool. We believe AI can expedite licensing and transaction in the IP space and help make this somewhat illiquid asset class more liquid. Stay tuned!