A few months ago, we wrote about the importance of the U.S. International Trade Commission (ITC) Section 337 Investigation, and some of its advantages that can make it an effective battleground compared to district court litigation (Patexia Insight 65). Although very time consuming and complex, we decided to expand that research as aligns with our long-term goal and mission of bringing transparency and efficiency to IP.

Our efforts resulted in a new comprehensive report, similar to our other IP Intelligence Reports. For the first time, we have measured the performance of all stakeholders involved in ITC Section 337 investigations, including respondents and complainants, as well as the attorneys and law firms representing them. As we prepare to release our findings in the final report in early January, we plan to publish some of the highlights in our Patexia Insight series in the coming weeks.

With these reports, our intent is to help corporations make better and more informed decisions when it comes to selecting their next IP counsel for litigation or prosecution. Access to data and powerful computation power, combined with Artificial Intelligence (AI) and Natural Language Processing (NLP) techniques, have enabled our data science team to scan and process tens of thousands of documents, finding the outcome of the cases. Something that not long ago was very difficult or impossible. 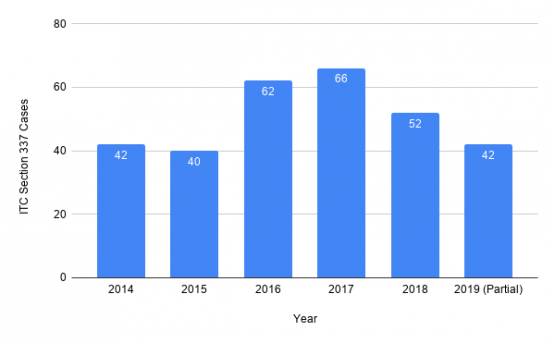 Our research covers a total of 304 ITC Section 337 Investigations filed between January 1, 2014 and October 1, 2019. These investigations are very labor intensive but move at a much faster pace compared to district court litigation. As a result, they require a much larger and more specialized team.

For this period of five years and 9 months, over 75,000 documents were filed by all parties under different cases. We further identified more than 11,800 professionals who were involved at different capacities in one or more cases. This includes attorneys, experts, translators, photographers, court reporters, etc.

We used both NLP techniques and humans to review the documents and correctly assign the cases to the participant companies, law firms, or individuals. In addition, to further ensure the highest quality possible and verify the accuracy, we also reached out to several thousand ITC attorneys over the last two weeks, and asked them to review the cases assigned to them and make corrections if needed.

While the average number of cases filed per year has fluctuated over the last five years, the change from one year to another has not been significant. Notably, however, many Am Law 100 firms that previously had little or no ITC activity, have recently added ITC to their IP and litigation groups.

Adduci Mastriani is a relatively small but established firm that specializes in ITC, and in fact, is the most active firm for ITC Section 337 matters. Since 2014, the firm has been involved in 89 ITC cases. In recent years, many of the larger firms have directly or indirectly hired attorneys from Adduci to form or expand their ITC practice. For example, Evan Langdon and Beau Jackson recently left Adduci to lead the Section 337 practice at Nixon Peabody and Husch Blackwell, respectively.

Levi & Snotherly, recently formed by Benjamin Levi and Rett Snotherly, is another firm that is focused on ITC proceedings under Section 337. In just under two years since its formation, the firm has got involved in 12 ITC cases, which is higher than many established Am Law 100 firms and impressive for such a short time period.

The specialization can go even further. Our data shows that some firms are more focused on a particular type of client. For example, Mei & Mark is another ITC firm which mainly represents respondents. The firm has been named in 16 ITC matters since 2014, and in nearly all of them, represented the respondents in the case. The firm’s activity has been rising in recent years.

While all of the above examples show small but active ITC firms, many of the large Am Law 100 firms have a very robust ITC practice as well. For example, based on our study, Alston & Bird is ranked third by activity for ITC Section 337. The firm has been involved in 49 ITC cases since 2014, and 10 cases in just the first ten months of 2019.

The demand for ITC attorneys remains quite high and our recruiting team has been working with several Am Law 100 firms, looking to add or expand their ITC practice. We anticipate that the landscape will continue to change in the next few years, as more experienced ITC attorneys move to larger firms for better opportunities and higher compensation.

The complete report will be released on January 2nd, and will cover the 400+ law firms, 1,000 most active attorneys, and 1,000 most active complainants and respondents. We have not only ranked the stakeholders by activity, but we have also measured the performance of each party (or their representatives) by taking into account case outcomes.

In the following weeks, we plan to write more about our methodologies for performance and activity calculations, and explain why these are useful data points for companies, and how they can use this information for selecting their ITC counsel. Stay tuned!