Earlier this year, we analyzed the 2019 patent activities in Patexia Insight 74. Among our observations, we noticed a sharp decline in the number of IPR petitions filed last year. In 2019, a total of 1271 IPR petitions were filed, compared to 1607 IPR petitions in 2018. This represents a decline of 21 percent. Patent litigation has been falling from its peaks in 2015 and as IPR filings closely follow the US district court trends with a lag of 12 to 18 months, this decline in IPR was expected.

We decided to take a closer look at the most active IPR firms we ranked in our 2019 IPR Intelligence Report and see which ones lost or gained significant market share as the broader IPR market declined in 2019.

While there are different ways to look at this, we chose to compare the absolute change instead of the percentage of change as smaller players with, for example, a single case in 2018, can grow 100% by adding one new case in 2019. We also looked at the total IPR activity for the firms as they represented either the petitioners and patent owners in 2018 or 2019.

The following chart shows the five firms with the largest decline in the number of IPR cases from 2018 to 2019. 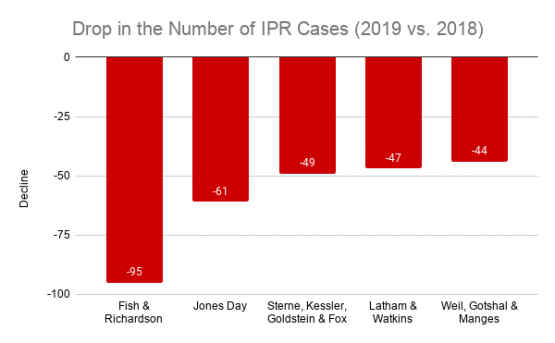 Analyzing the clients of these firms reveal that the larger number of cases in 2018 might have partially been related to a number of battles between a few large corporations in 2017 and 2018.

For example, Fish & Richardson, which is among the most active IPR firms, saw the largest decline but still represented its clients in more than 100 IPR cases in 2019. In 2018, Fish represented Apple in about 50 IPRs (i.e, against Qualcomm) and Samsung in about 25. This dropped to 14 and 6, respectively in 2019.

Jones Day also saw a similar drop. The firm saw a big rise in 2018 for representing Qualcomm in about 40 IPR cases, which went away in 2019. Sterne Kessler represented TaylorMade Golf in about 20 cases and Align Technology in about 17 cases in 2018 but the volume for the two companies dropped to almost zero in 2019.

Latham & Watkins and Weil Gotshal might have experienced a general decline in 2019 due to the market decline as both firms did not seem to have significant work from a single client in either 2018 or 2019.

While the broader market was declining, some firms were able to grow and gain market share in 2019. The following chart shows the five firms with the largest increase in the number of IPR cases from 2018 to 2019. 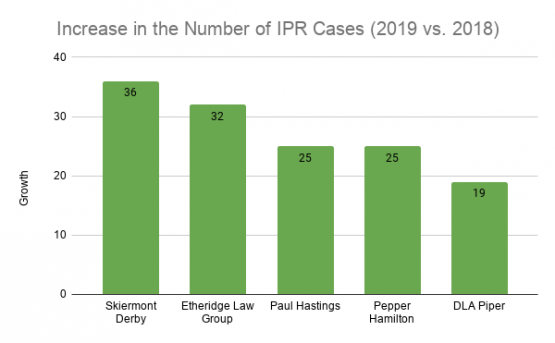 We took a closer look at each firm to see if the rise was related to a single client. Skiermont Derby, for example, continued representing IPA Technologies in about 20 IPR matters in 2019, which contributed to its market share gain.

Almost all the gain for Etheridge Law Group came from a single client. The firm represented Uniloc in about 63 cases in 2019.

Paul Hastings also benefited from two of its top clients: Google and Samsung. For example, in 2019, the firm represented Google in about 30 IPR matters.

Pepper Hamilton which lost some of its PTAB stars (Tom Engellenner, Reza Mollaaghababa and Andrew Schultz joined Nelson Mullins in early 2019), was able to regain some momentum as the firm represented Tela Innovation and Cornell Research Foundation.

The following table summarizes the activity of the top five with the largest growth and decline in IPR activity from 2018 to 2019.

While last year’s decline in the IPR filings has hit many IPR leaders, our recruitment data shows that firms still believe in the importance of PTAB / IPR practice and are looking to gain market share. The strategy is to grow the practice even if the IPR total market declines for a couple of years because of the decline in patent litigation.

For example, last October, Haynes & Boone, which already had a very strong PTAB practice, doubled down on their PTAB growth strategy by bringing Eugene Goryunov who was the go-to-partner at Kirkland & Ellis for IPR matters. Goryunov represented many of Kirkland’s IPR clients before the PTAB. With his addition, we expect to see further growth for Haynes & Boone’s PTAB practice.

Several other firms have been adding IPR partners. Brent Babcock joined Womble Bond in the Irvine office to grow their PTAB practice while Bridget Smith joined Lowenstein & Weatherwax, which already was a major player among PTAB firms. Both partners left Knobbe Martens.

For the first time, we have made our first IPR Intelligence Report, published in September 2017, available for free. You can download the full report from Patexia website.

In the coming weeks, we plan to publish some of the results of our recent patent prosecution survey which we covered extensively in our 2020 Patent Prosecution Intelligence Report. This includes the best practices and also cost analysis for various patent work. 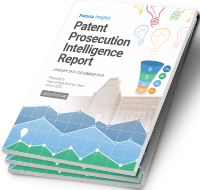 Disclaimer: The data for this study was obtained from public sources such as USPTO, PTAB, and PACER. Patexia has gone to great lengths to provide valid and accurate analysis based on this data. However, Patexia does not guarantee 100 percent accuracy nor take any responsibility for possible losses caused by the use of information provided in this study. Specifically, some numbers for law firms related to cases filed late in 2019 may still be inaccurate as it may take a while before an attorney or a law firm is assigned to a case.

Note: A version of the article was originally published on IPWatchdog.