In early March we released our 2nd Annual Patent Prosecution Intelligence Report, where we evaluated more than 3,500 patent firms over the last five years (Jan 1, 2015 through December 31, 2019). We looked at many metrics such as number of office actions, interviews, extensions, claims allowed, etc. to analyze and rank all patent firms based on their performance and activity. Since we had calculated all these metrics for each of the patent applications, we decided, instead of the entire US patent set, apply a different lens and focus on a single company, with the goal to evaluate the performance of all law firms, working for that company for the same time period.

Apple is the perfect company for this kind of study because first of all, it has a relatively large patent portfolio. The company obtained 11,079 US patents (i.e., excluding design patents) in the last five years (2015 to 2019). Second, the company works with a large number of patent firms. In the last five years, 48 patent firms obtained at least one or more non-design patents for Apple. Third, aside from its portfolio size, the company is known for its tough selection process when it comes to choosing a new counsel for either patent litigation or prosecution. Oftentimes, the company has a bidding process before it decides which firm to use for a particular matter.

While we have limited knowledge of the internal selection process at Apple, we assumed the company’s goal is to optimize the three important factors: cost, quality and time for patent prosecution. Cost is the total cost including the USPTO fees as well as law firm fees, while we defined quality as the overall success and efficiency of the process which means getting maximum number of applications and claims allowed, without unnecessary extension requests or numerous back and forth correspondence with the USPTO. Time (pendency) is the number of months from filing to decision.

Last year, we did a similar study related to Apple and published the results in Patexia Insight 55. The top five firms sorted by their activities for Apple were Meyertons Hood, Womble Bond, Treyz Law Group, Morrison Foerster, and Kilpatrick Townsend. 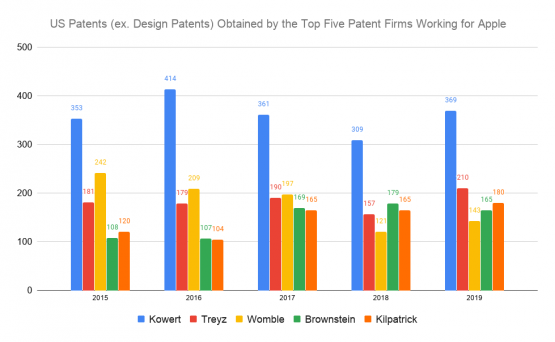 As shown in the above chart, this year, there is a slight change in the mix. The top five firms now include: Kowert Hood, Womble Bond, Treyz Law Group, Brownstein Hyatt, and Kilpatrick Townsend. Morrison Foerster is no longer among the top five and has been replaced by Brownstein Hyatt, a national firm with the majority of their IP practice based in Denver, and Reno. Also, Meyerton Hood has changed the firm’s name to Kowert Hood.

During this period, the top five firms obtained 5,098 US patents or roughly 46 percent of all issued patents (11,079) for the company. Kowert Hood remains at the top with almost twice the volume of the second and the third most active firms, Treyz Law Group and Womble Bond, with 917 and 912 patents, respectively. While our study revealed a total of 48 firms working for Apple, we believe not all those firms actively work for Apple at the moment and in most cases, they might have ended up in the mix because of Apple’s acquisitions of other companies or patent portfolios over the last five years.

The following table summarizes these key metrics as we calculated them for each of the top five patent firms working for Apple. The top row shows those averages for the entire company.

To compare, one can simply look at the averages for a law firm and see how that particular firm is performing with respect to other four law firms or with that of the average for the entire company. The allowance rates should obviously be higher while the averages for the office actions, extensions or pendency should be lower.

For example, Womble Bond handles about 8 percent of the company’s patent work (917 patents out of a total of 11,079 patents) and in all metrics is better than the average. The firm’s request for extension is about the same as the average for the company.

To calculate the cost, we developed a model based on a recent survey we conducted before publishing our 2nd Annual Patent Prosecution Intelligence Report. In this survey, which more than 50 general practice and IP boutique firms from all over the US participated in and has completely been covered in our report, we looked at various aspects of patent prosecution including cost of filing for different kinds of applications as well as actions before the USPTO such as responding to an office action, filing an RCE, appeal, etc. We asked about the location of patent practice groups for those participating law firms in order to figure out the correlation between the location and cost. We also calculated the USPTO cost for each of the applications based on the fee schedule published by the USPTO.

The complete cost model includes three components: USPTO Filing Fees, USPTO Maintenance Fees, and Law Firm Fees. Since these patents are fairly young and issued recently, we did not consider the maintenance fees for this study. Besides, paying the maintenance fees is more of a business decision carried out by the company and has nothing to do with the efficiency of the law firm.

Based on the exact fee schedule published by the USPTO and the approximate law firm fees we obtained by conducting our survey back in January, we estimated the average cost for each patent obtained by each of the law firms. For example, about 50 percent of our survey respondents stated that the cost of response to an office action is between $2,000 to $3,000. For this study, we assumed the cost of each office action is $2,500. 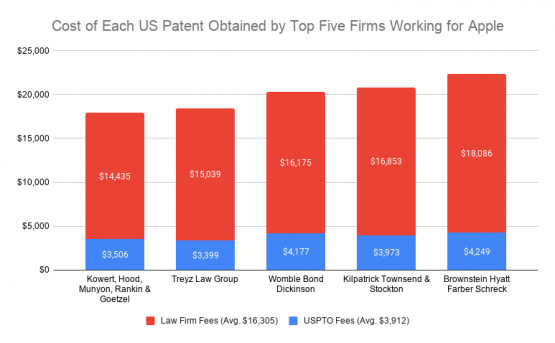 Based on our model, the above chart shows the average cost per patent for each of the top five law firms working for Apple. For this study, we assumed all law firms charge the exact same amount for the same action (e.g., drafting the application, response to an office action, or a restriction). While this is not a correct assumption as cost definitely varies from one firm to another, it makes the comparison fair. It shows that in equal conditions how much a patent would have cost Apple if they had to pay exactly the same amount for different actions to each of the firms.

Assuming that Apple’s cost per patent is not significantly different for the above firms, we can conclude that most likely a firm like Brownstein Hyatt has offered a much lower cost compared to other firms for similar activities (e.g., $1,500 to $2,000 for an office action response instead of $2500). Considering that the patent prosecution group for the firm is located in lower cost cities such as Denver or Reno, our assumption most likely is valid.

Looking at the top five firms representing Apple for patent prosecution, and comparing the list with what the mix was a year ago (Patexia Insight 55), we see some repeating patterns:

While Apple was just one example, this is generally the trend. There is an ongoing pressure by big corporations to reduce the cost of patent prosecution. We extensively covered this in Patexia Insight 54 (Is Patent Prosecution Becoming a Commodity?). The high-cost of living in coastal cities and high salaries of associates, combined with expensive Class A office buildings and large overhead make it almost impossible for larger firms to run a profitable patent prosecution practice.

With all these warning signs, we still see many large firms have openings for patent prosecution associates in expensive metropolitan areas. While oftentimes they try to optimize their operation by leveraging the expertise of their patent prosecution group for litigation support, which is more profitable, that by itself may not be sufficient to keep them profitable.

We believe if firms do not carefully evaluate their processes and try to optimize them by finding the right solutions for each case, it will only be a matter of time before they lose their prosecution business either to smaller IP boutiques with less overhead and more efficient management or to larger firms with patent prosecution practice, predominantly located in less expensive areas such as Salt Lake City, Kansas City, Denver, Texas, etc.

The above analysis was conducted by Patexia Research Team using the latest version of our Patexia Prosecution Analyzer. In the coming weeks, we plan to cover the firms with the largest growth or decline in prosecution work over the last five years. Stay tuned...