Earlier this month, we released our 2nd Annual Patent Prosecution Intelligence Report where we ranked the top patent firms based on their activity and performance over the last five years (2015 to 2019). We decided to take a closer look at the most active firms published in the report and analyze the top firms with the largest growth and decline last year (i.e., changes from 2018 to 2019).

Last year, the number of issued US patents increased by about 16%. In 2018, the USPTO issued 341,098 patents compared to 395,456 in 2019. There are different ways to look at the data and evaluate the growth and decline of the firms. While looking at the percentage of the decline or growth is one of the most common methods, we, instead, decided to measure the changes in the total number of patents obtained by each firm from 2018 to 2019. The reason for that was because the percentage can easily be doubled or tripled for smaller firms with a small volume of work.

As we had explained in our previous Patexia Insight articles (e.g., Insight 54: Is Patent Prosecution Becoming a Commodity?), patent prosecution is under pressure as corporations are trying to manage and reduce their IP prosecution cost. This has resulted in a desire for formation of new firms by attorneys in larger firms. Partners tend to leave those firms in order to create and operate more cost efficient firms. For example, Element IP was formed earlier this year by Richard Treanor and a number of ex-Oblon attorneys while Kubota & Basol was formed by Glenn Kubota and Erol Basol and a number ex-Morrison Foerster attorneys.

Firms with the Largest Growth in 2019 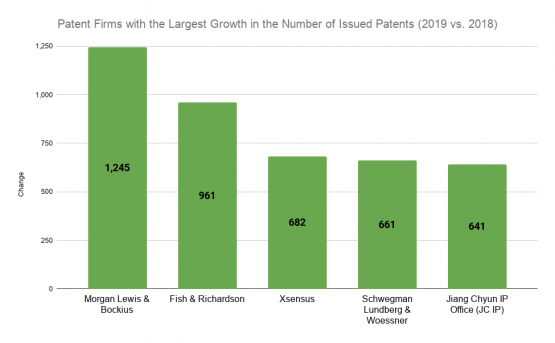 Morgan Lewis showed a growth of more than 70 percent from 2018 to 2019. Analyzing the firm’s clients show that the firm’s workload had increased significantly in South Korea. For example, Hyundai, LG Electronics and Kia Motors, three of the large Korean companies, worked closely with the firm for their US filings in 2019. The workload for Apple (the firm’s sixth largest patent client) also increased by about 50 percent from 2018 to 2019. The growth for its Korean clients can mainly be attributed to the acquisition of a large group of attorneys from McDermott Will & Emery. In 2018 and early 2019, about 40 attorneys (partners, counsels, associates and technical specialists) joined the firm from McDermott (mostly in DC, Chicago, San Francisco as well as other offices). This was due to the long term plan of the firm to expand in Asia-Pacific region (Hong Kong, Singapore, Korea, etc.).

Fish & Richardson’s growth was not driven by a single client. But the firm did more work for LG Electronics, Sanofi, Saudi Arabia Oil Company, alarm.com and Google (historically the firm used to do more work for Google) as well as many other smaller clients.

The growth for Xsensus, a newly established firm by ex-Oblon partners in 2018, came from Sony, its number one client. Our data suggests that Sony’s IP department has been going through some major restructuring in recent years. We had also covered Chip Law Group, another new firm that the company started to work with. Vladimir Elgort, one of the top IP leaders left the company last year to join American Express as their Chief IP Counsel.

Schwegman Lundberg, one of the earliest firms that adapted remote work and focused on efficient patent prosecution also was among the top firms with the largest growth. The firm’s growth came from Microsoft, Micron and a number of smaller clients. We believe the reason for the firm’s growth is its attention to operation cost and IP analytics. The firm allows attorneys to work from home while utilizing IP analytics and data to further gain business insights and make its prosecution operation more efficient. The firm has its own IP analytics team and has historically worked closely with Intel IP department, its number one client to design and build the right analytical tools for performance measurement.

Jiang Chyun IP Office (JCIP) is an IP firm based in Asia (Taiwan and China and Japan) with a very small operation in the US. The firm has leveraged its proximity to Taiwanese and Chinese companies and but have gained significant market share not only in those countries but also in Japan. While the work volume from the firm’s top clients (ITRI, HTC, and Wistron Corporation) has not changed significantly, the firm has acquired many new but notable clients in recent years that have contributed to its growth in 2019.

Firms with the Largest Decline in 2019

In 2019, many firms either completely shut down their patent prosecution practice or unfortunately went out of business. Our data shows the number of firms is in the range of 100 plus. While the percentage of drop for those firms is 100%, similar to the previous section, we decided to analyze the firms with the largest drop in the total number of US patents they obtained for their clients. The following chart shows the top five firms with the largest decline in the number of issued patents. 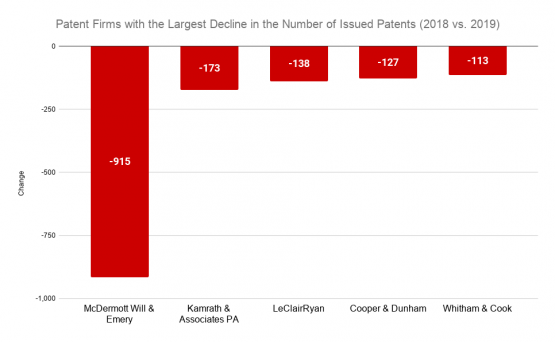 Kamrath & Associates, an old IP boutique located in the Minneapolis area and run by Alan Kamrath was acquired by Mayer & Williams, another small IP boutique in New Jersey.

LeClairRyan was a general practice law firm that filed for bankruptcy last August and went out of business. The partners moved to other firms and as a result of filing bankruptcy, their prosecution dropped to zero for the remainder of 2019.

Cooper & Dunham’s prosecution practice has shrunk about 37 percent from 2018 to 2019. Analyzing the firm’s clients show that their number one client, Ricoh has reduced its filings in recent years and among their patent firms, Cooper & Dunham has been affected the most as Ricoh was responsible for about ⅓ of the firm’s patent work.

Typha IP was a small IP boutique in DC with major Japanese clients (Sony, Panasonic, etc.). Arimi Yamda, the founder of the firm and all her team joined Michael Best last year.

In Patexia Insight 56, we had explained multiple ways to increase the top line (revenue) and bottom line (profit) for the patent prosecution practice. Based on what we observed in the above 10 firms with the maximum change (growth or decline) in their patent work from 2018 to 2019, we will summarize some of the solutions for growth and business stability here:

The above analysis was conducted by Patexia Research Team using the latest version of our Patexia Prosecution Analyzer. In the coming weeks, we plan to cover the IP-intensive companies with the most and least expensive patent prosecution operation. Stay tuned…

Contact us to learn how we can provide you with IP insights about your firm, your company or your competitors for FREE throughout the year.

Disclaimer: The data for this study was obtained from public sources such as USPTO, PTAB, and PACER. Patexia has gone to great lengths to provide valid and accurate analysis based on this data. However, Patexia does not guarantee 100 percent accuracy nor take any responsibility for possible losses caused by the use of information provided in this study. Specifically, some numbers for law firms related to cases filed late in 2019 may still be inaccurate as it may take a while before an attorney or a law firm is assigned to a case.