Last week we investigated the impact of COVID-19 on the IP Sector and, specifically, patent prosecution (Patexia Insight 79). This week, we are going to continue expanding on the same topic, showing how this recession will affect IP hiring.

Over the last few weeks, many firms have frozen their hiring, while some have even gone one step further and announced furloughs and pay cuts for associates and partners. On-campus interviews have been moved from August to January.

IP attorneys work in three different types of organizations: law firms, corporations and government/universities. The recession will have a different impact on each group.

Those employees working for the US government or universities (e.g., attorneys working for the USPTO, PTAB, US Courts, University Tech Transfer Offices) will be least affected by the recession, as government spending and hiring is stable or often substantially higher during an economic downturn. This increase in spending is, in fact, one of the ways the US government tries to help the economy and fight the recession. 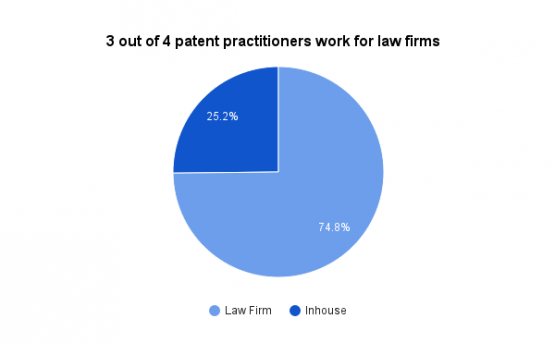 Based on one of our earlier studies (Patexia Insight 9), approximately one out of every four patent attorneys works in-house. Considering that the number of IP-intensive companies are a lot larger than patent firms, and considering all companies with a meaningful number of patents (e.g., a few hundred patents) need at least one IP manager or director, the in-house IP positions are generally safer and more secure. This is especially true for those small IP departments with one or two employees who work with their outside counsel to capture and file ideas or manage the company’s IP portfolio, as opposed to those companies with larger in-house IP departments, who work directly with the USPTO.

The last group of patent attorneys are those who work for law firms. This group is perhaps the most vulnerable group during the recession. As we explained in Patexia Insight 79, the patent work can be divided into three areas: prosecution, litigation, and transaction. Each area will be affected differently during the recession. For now, we remain focused on patent prosecution but we plan to publish separate studies about IP litigation and transaction.

Aside from the practice areas (litigation, prosecution, and transaction), the market sector (industry), client size (small, midsize, and large corporation), and geographical location of the firm/attorney (e.g., DC vs California) play an important role in demand and job security.

We explained that patent prosecution had seen two somewhat different growth periods over the last two decades (Patexia Insight 79). In the first period (1997 to 2010), patent prosecution grew at an average rate of 6.7 percent per year, which resulted in sector expansion and a higher demand for patent attorneys during that time (both private and public sectors).

In the second period (2011 to present), the growth dropped significantly. US filings almost saturated at around 650,000 applications per year with zero to negative growth in recent years. During the second period, the prosecution grew at an average rate of 2.7 percent per year.

We also examined the statistics for the past two recessions and observed a dip in filing activities during both recessions (the tech bubble and the financial crisis).

The current COVID-19 crisis started as a supply shock. However, as it was expected, it is quickly creating a demand shock. With the total US debt now more than 100% of the country’s gross domestic product (GDP) and no room for the Federal Reserve to lower the interest rate further below zero, experts believe we are already in a new recession (or possibly the next great depression). As a result, we predicted a sharper decline of 2 to 4 percent per year in US patent application filings for the next couple of years (2020 and 2021).

How Will the Projected Decline Affect Patent Firms?

The patent firms should be prepared to deal with two types of decline:

The ecession will most likely cause a drop of 2 to 4 percent in the total number of patent applications, as well as an increase in abandonment of non-essential applications by corporations.

At the same time, for over a decade, corporations have constantly pressured law firms to reduce their cost per application. This resulted in a wider adoption of the flat-fee model, as patent attorneys had to gradually move away from the traditional hourly-based model. Recession will just be another excuse for corporations to go back to the same cost cutting argument. The net effect is a further decline in patent prosecution revenue for law firms.

How Will Law Firms Transfer the Pressure Down to Their Attorneys?

As the financial pressure mounts, law firms will try to adapt to the new norm and search for ways to stay profitable. We had looked at some of the ways they can improve efficiency in Patexia Insight 54 (Is Patent Prosecution Becoming a Commodity?). While all those methods still apply to reduce cost and make firms more efficient, we are going to investigate the recession impact specifically on patent attorneys and IP hiring.

Law firms and patent attorneys can be divided into the following four groups:

Solo Practitioners
This group of patent attorneys (or agents), work independently (and may have paralegals). They usually have a limited number of clients and growth opportunities due to limited bandwidth and resources. They often work with very small companies, startups, or individual inventors. If a larger company works with them, it usually makes up most of their revenue (e.g., more than 70 percent of their revenue).

This group will directly feel the pressure during the downturn, often through reduced overall revenue and fees. It is much harder for them to change those numbers, as new business development becomes even more difficult during the downturn. This group can try to lower their cost by joining forces with another solo-practitioner or small firm. This could help reduce their overhead in areas such as office space, software, paralegal, etc.

Associates and Service Partners
This group works for either IP boutiques or general practice firms. Since they do not manage the client relationship and do not bring any business to the firm, they work directly or indirectly for another partner who owns the client. This group is the most vulnerable group during the downturn, because their survival depends on the amount of work the firms receive.

At larger firms with enough work, most associates and agents are expected to bill between 1,600 and 1,800 hours per year for patent prosecution work. If the attorney is underutilized, meaning that his/her annual billing is not high enough, or if he/she is not as efficient as other attorneys (e.g., drafting fewer applications compared to others), it will be felt more during the downturn.

If the firm decides to reduce headcounts, these attorneys are the most vulnerable ones. They need to make sure to stay close to the partners with a book of business. Or if they feel the firm’s business is not strong, they should look for work in-house or at other firms with stronger business.

Partners With Book of Business at General Practice Firms
These partners are very valuable and in high demand during the downturn. They are the rainmakers and feed other attorneys with work they bring in. Attorneys who have growing clients (companies that have shown year-over-year growth in prosecution work) will have a more stable business, as their clients continually send them more work.

Often during a downturn, the compensation of these attorneys may be affected, because the firm's overhead grows due to decline in overall revenue. As a result, they need to pay a higher percentage of the overhead.

Where Do We Expect to See Most Lateral Moves?

Many firms will be born or grow during the economic downturn. As pressure mounts on all attorneys, those with solid businesses, but who have been affected by the pay cuts or lower compensation due to higher overhead, may think about ways to improve their conditions. This may result in them moving to other firms or forming their own partnerships. We divide these into the following four categories:

Formation of New Firms
Attorneys with a strong book of business who are working for firms with mismanaged, inefficient, or expensive prosecution practice groups may form a new partnership. This will help them increase their compensation or avoid losing their clients by lowering their overhead, if their previous firm had large overhead and expensive rates. In some cases, they can grow their practice by bringing in new clients that they could not work with previously due to existing conflicts.

This type of merger is often done for cost cutting purposes. If done properly, it can immediately result in reduced overhead (office space, staff, IT, etc.). If the practice areas are complementary or if one side has extra work while the other side has extra capacity, it may result in increased revenue per attorney.

Merger Between a Small and a Large Firm
This kind of merger or lateral move for a group will only make sense if the acquiring firm has a very efficient prosecution practice (e.g., located in lower cost regions, allows remote work, uses IT and analytics effectively, has extra work and limited capacity). Otherwise, smaller firms are often more efficient and better to stay independent.

Mergers Between Two Large Firms
Mergers between large firms are almost non-existent and very risky during a recession. Each firm’s business consists of small practice groups run by all partners. It is difficult to evaluate the health of each practice and their clients independently, as well as how they would react to recession after a big merger. As a result, firms will prefer to sit on the side and avoid the uncertainty resulting from a large merger.

While the margins are often lower, the revenue generated from the patent prosecution practice is often more stable than other practice areas, such as litigation or transaction. A careful examination of the clients, their sector, and business condition can make the acquiring firm more comfortable.

Smart firms that have already built an efficient platform for patent prosecution will take advantage of the current uncertain climate to grow further by finding underpaid attorneys and groups with solid books of business who are working for inefficient firms (and many of them exist out there).

In the coming weeks, we plan to study the companies that had the highest growth and decline in patent work in 2019. A review of the changes in the total patent work of their clients can help law firms understand and position themselves for this uncertain time. Contact us to learn more about your clients’ workload or to find new opportunities for yourself or your group at stable firms with strong cash positions.

While the near future may look dismal, firms and attorneys need to stay flexible and creative, so they can assure their continued growth even during the tough time. Recession only forces us to be more efficient and do what we had to do anyway, but what we were never forced to do.

Many law firms have announced pay cuts and paused their recruiting out of uncertainty or only because some others had done the same. But we have seen some firms are selectively looking for growth opportunities.

As Ray Dalio says: “To have both the money you need and the job you want, you have to be creative and flexible.”