Running a profitable patent prosecution practice has become more challenging in recent years. The recession triggered by the current pandemic is going to make this even worse in the coming years (Patexia Insight 79). This means patent attorneys will have a difficult time to maintain their high standard as they see their revenue per application and overall number of applications decline.

Back in March, we released our 2nd Annual Patent Prosecution Intelligence Report. We measured the performance and activity of more than 3,500 patent firms to rank them in our 2020 report. The report covered more than 1,100 law firms and the analysis once again proved that volume leaders were not necessarily the best performing patent firms. Similar to last year (Patexia Insight 57), this week, we are going to review some of the best performing and most active patent firms as covered in our latest annual report. 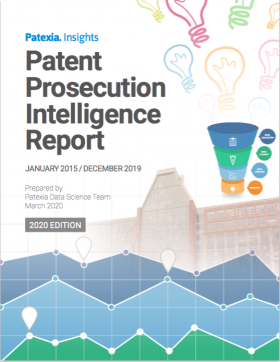 Our comparison of patent data for 2018 and 2019 shows that many firms went out of business or lost significant workload in 2019. But at the same time, some new firms with more efficient processes were born and some established firms saw remarkable growth in 2019 (Patexia Insight 78).

To calculate the performance of law firms, we defined and measured three independent factors:

Similar to last year, we looked at all patents issued in a 5-year window from January 2015 to December 2019. To make a fair comparison, we limited the performance rankings only to the top 500 most active firms in high-tech, bio-tech and overall. The performance scores once again showed that volume is not an indicator of quality. Our analysis showed that in general, maintaining a very high-standard and consistent work quality is much more difficult when the volume goes up.

Here we review some of the best performing and most active patent firms as covered in our 2020 report in no particular order:

As we explained earlier, for a fair comparison, we had to limit the performance rankings to those firms that met our minimum threshold in terms of number of patents. As a result, some very good performing firms with lower workload were not included in our annual rankings. For example, CreatiVenture Law is one such firm. Its performance score puts this small firm with more than 100 patents among the top 5 percent out of more than 3,500 patent firms. But the firm was not included in our performance rankings as it did not meet the minimum volume requirements. There were several other instances where the firms were not ranked due to lower work volume but their work quality was very good.

We have calculated all of the above metrics (success, efficiency, activity, performance, etc.) and many other variables including number of office actions, RCEs, Appeals, … for every patent, law firm, company and examiners. Using our powerful Prosecution Analyzer tool, the data can be filtered and grouped from many angles. Firms use the tool to gain insights about examiners, competitors or clients. And it is often utilized by attorneys for business development as it empowers the firms to focus on metrics other than cost. Companies also use the data not just for prosecution analysis but also to evaluate the performance of their outside patent counsel or compare their portfolios with their competitors.

Past several weeks we focused on patent prosecution. We are going to write more about litigation in the coming weeks including ITC, IPR, Hatch-Waxman / ANDA and district courts. Stay tuned...