The first half of 2020 is over and so far this year has been very challenging for all sectors of the economy. The legal sector has not been very different. Some law firms have already announced pay cuts and layoffs in anticipation of the economic downturn. But, the numbers may suggest a different narrative for the IP and patent practitioners. District court patent lawsuits went up 27% in Q2 compared to the first quarter. In Q2, 1,090 patent lawsuits were filed. This was also 7 percent more than the second quarter of 2019. IPR activity rose 12% in Q2 compared to Q1 of 2020. In Q2, ITC Section 337 remained unchanged compared to Q1. At the same time, the number of ANDA cases saw a decline of about 38% in Q2. 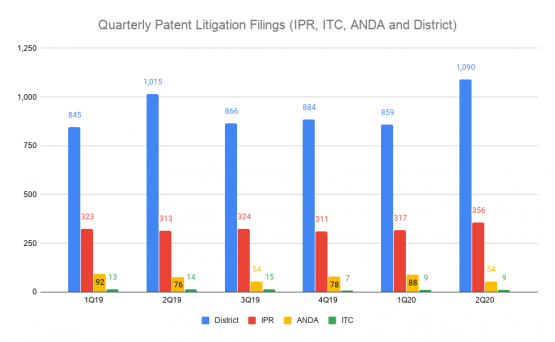 After many years of decline, in January, we reported a small year-over-year increase in patent litigation in 2019 (Patexia Insight 74). We were cautiously optimistic and emphasized the importance of this reversal although the timeframe was not long enough to help us draw any conclusion. Now, two quarters into 2020, we see that the trend has continued and in fact, has accelerated lately. The following figure shows the declining trend in patent litigation from 2015 (blue bars) and the reversal in 2019. As you can see, this trend reversed in 2019, and in the first half of this year, we have had more than 2,000 cases. 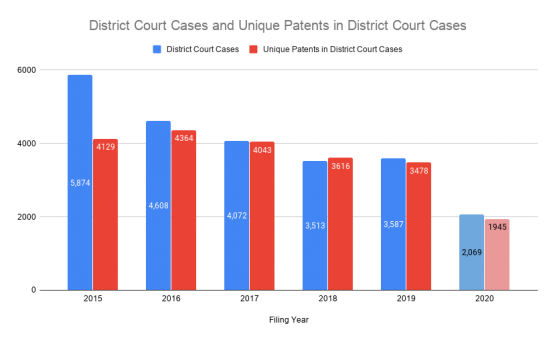 The number of patents increased by 7 percent in the second quarter of 2020 compared to the first quarter. In Q2, a total of 101,219 patents issued. This is also 4 percent higher than the same period in 2019. 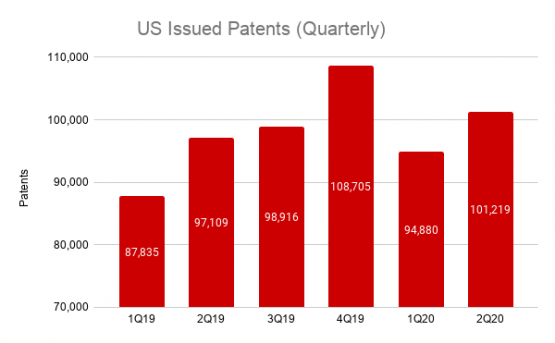 The following chart shows the number of issued patents since 2015. Although the growth has declined lately, every year except 2018, the growth has been positive. 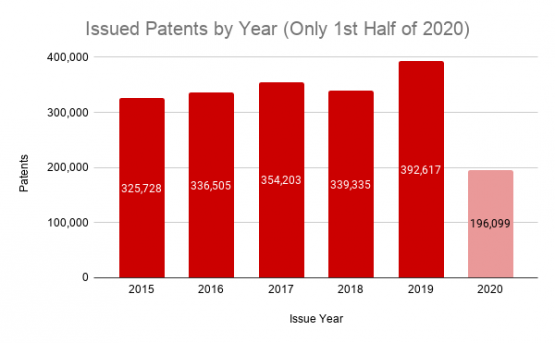 In terms of the litigation venue, in the second quarter, the Western District Court of Texas has moved to the top with 491 cases (after PTAB), followed by Delaware District Court with 322 cases. 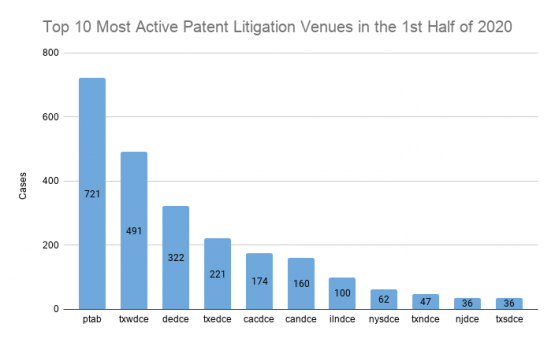 In the coming weeks, we will continue our coverage of patent litigation. As we prepare to release our first ANDA/Hatch-Waxman Intelligence Report in late August, our focus will be more on ANDA litigation. This includes evaluation of cost, staffing and workload for ANDA cases as we collect the data from our recently conducted ANDA survey.

We are also preparing our 4th IPR Intelligence Report which will be out in September. We will be contacting the IPR attorneys in the next few weeks for a similar survey (cost analysis) as well as case verification. Stay tuned...