Assigning a dollar amount to the entire patent prosecution market in the US has been something that kept our research team at Patexia quite busy for a while. Back in March, we reported that more than 3500 law firms had worked with over 110,000 companies to file 2M+ patent applications in the last five years (2020 Patent Prosecution Intelligence Report). This week, our goal is to estimate the size of this part of the IP market (patent, trademark, copyright and trade secret) which happens to be the largest and has seen some downward pressure by corporations over the past few years.

The model we have developed has taken into account many factors such as the differences between design vs. utility applications, domestic vs. foreign filings, high-tech vs. biotech applications, the complexity of applications, and most importantly the brand or size of the firm. You can now easily see the estimated patent revenue for all firms on Patexia (search your firm here: www.patexia.com).

In the past, we had written many articles about the ever-changing cost models that had forced patent firms to re-invent themselves (Patexia Insight 54). Corporations continue to pressure law firms to work on a flat fee model (versus the traditional bill-by-the-hour model).

This has caused problems for patent attorneys at larger firms (e.g., AM Law 100) as they often need to maintain the minimum hourly rates imposed by the firm’s executive committee to stay profitable.

On the other hand, cost increase especially in the more expensive metropolitan areas such as New York, Palo Alto and Los Angeles, puts additional pressure on law firms located in expensive regions.

These all have resulted in the formation of new business models for patent prosecution. For example, many patent attorneys have left big law firms to form their own low cost patent boutiques. New virtual firms have also been formed in recent years and have got even more popular after the pandemic due to their low overhead and flexibility to allow attorneys and patent agents to work remotely from the comfort of their homes.

Earlier this year, we conducted a survey to figure out the approximate cost for different steps of patent prosecution. The results of our survey were published in our second annual Patent Prosecution Intelligence Report 2020 (released in March). Using the same raw data, our data science team has now built and trained models to estimate the cost of patent prosecution for each application. The models take into account many actions from filing an extension or RCE to appeal, etc. 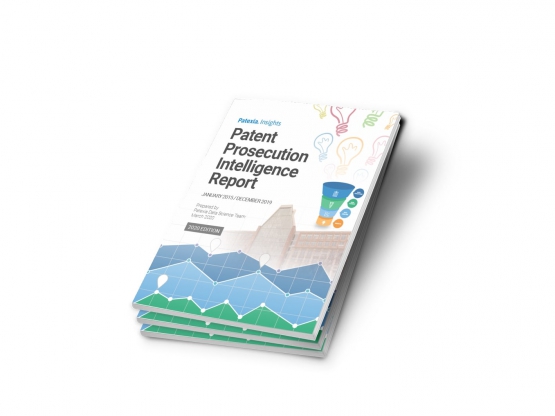 In addition, to make the model more accurate, we have taken into consideration the profitability of different firms. For example, depending on the brand of a firm and its profitability, we have adjusted the cost of each application. We have also considered the complexity of an application, number of claims including independent claims, etc.

We applied this model to all the patent applications issued or abandoned since 2015 and then combined the cost for all of them to estimate the total revenue for patent prosecution per year.

The following chart shows the estimated revenue generated from US patent prosecution by all patent attorneys and agents by year. 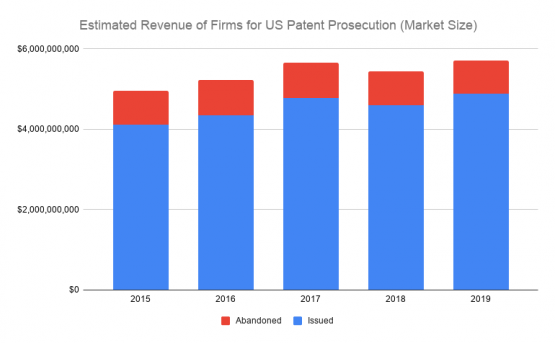 This revenue only is an estimate for the patent prosecution work done by all USPTO registered attorneys and agents based on the publicly available application data provided by the USPTO (issued or abandoned). It does not include provisional applications or unpublished applications as well as other types of patent-related work such as opinion work and IP counseling. Based on our estimate, in 2019 the sector saw the largest overall revenue of about $5.7B which was about 5 percent higher than in 2018 and approximately 15 percent more than in 2015. 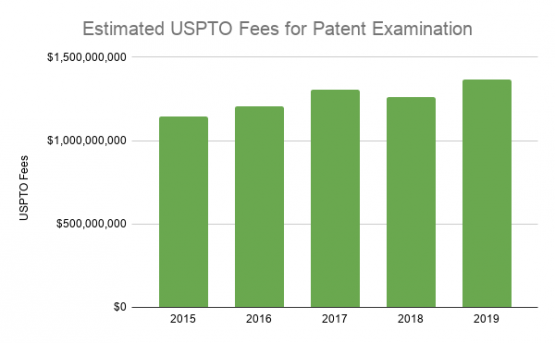 To check the accuracy of our calculations, we reviewed the available USPTO performance and accountability reports. According to the USPTO 2018 Performance and Accountability Report, the patent revenue for the USPTO was close to $3B. Excluding the maintenance fees (47%) and other fees (9.5%) received by the office, the revenue for patent examination was approximately $1.3B. Our data for 2018 estimates this revenue at around $1.26 which is very close to the actual number (considering that the USPTO fiscal year ends on September 30 and is different than the calendar year).

Based on our estimates, the law firm fees collected from companies for US patent prosecution is approximately 4.4 times larger than the USPTO fees ($5.7B vs. $1.3B).

If we include the maintenance fees and also add the USPTO patent revenue to our estimated revenue generated by patent firms, we get to an estimated market size of $9B per year. That means US and foreign corporations spend or in other words invest around $9B each year to protect their market share for current or future products in the US.

Knowing that more than 90% of patents are expired worthless and perhaps less than one percent will create direct or indirect value for the owner, the real question is what percentage of this is considered a good investment done by corporations. Now the actual cost is much more if you also add the cost of filing in foreign countries to all of the above.

When calculated per application, it provides valuable insights about the efficiency and cost of each of the law firms. This has helped our corporate clients to better understand their organic patent portfolio development and whether the law firms they are working with are efficient and cost-effective.