In the last few weeks, we have written about patent prosecution spending in the US using our revenue and cost estimation models. First, we estimated the size of the US patent prosecution market to be around $10B per year. About ⅓ of this amount is the revenue generated by the USPTO and the remaining ⅔ is revenue generated by law firms. Then, we ranked the top 10 firms by their estimated patent revenue (Patexia Insight 92).

Our model is new and we are closely working with a number of law firms to improve it. So far and based on the initial feedback, it seems that our patent prosecution estimates have become much more accurate and close to the actual revenue numbers.

IBM has been the largest client of the USPTO for several decades now (27 years in a row). The following chart shows the number of US patents the company has obtained over the last five years. 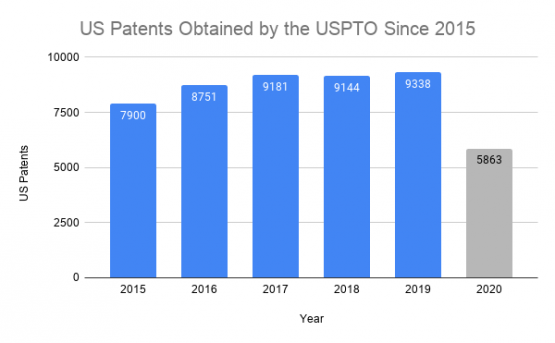 As we have shown in previous articles, we have built a financial model to estimate the IP spending/revenue for corporations and law firms.

Since the most recent filings are not fully disclosed by the patent office and normally it takes 18 months for the application to be published, our estimates tend to be more accurate for earlier years. The following pie chart shows the estimated spending by IBM on US patents in 2017 which is around $278M. 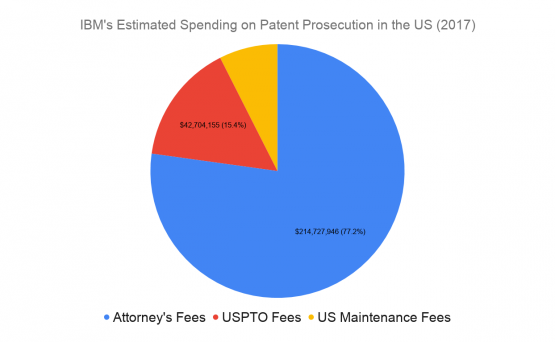 Based on our model, the company approximately paid $63M to the patent office in 2017. $42.7M  of this amount was the USPTO fees related to new filings and around $20.7M was the maintenance cost of the US patent portfolio to keep its important assets enforceable.

According to the USPTO Annual Performance Report published for the fiscal year 2017, the patent revenue of the office was approximately $2.8B. This means that IBM approximately contributed 2.2 percent of that revenue.

Based on our financial models, we also estimate that the company spent close to $214M on attorney’s fee for its ongoing patent prosecution in the US. The following chart shows the top 10 firms based on the estimated revenue they generated from IBM in 2017. 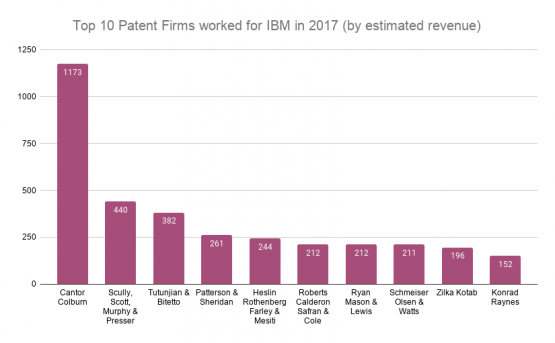 We have estimated the revenue for these firms generated in 2017 for the work they performed for IBM. The following table summarizes their estimated revenue generated from IBM in 2017.

Our data suggest that IBM worked with more than 120 patent firms in 2017 but the top 10 most likely earned almost 45 percent of IBM’s spending on US patent prosecution.

It is important to remember that IP spending in the US is only part of IBM’s allocated budget for the IP each year as the company also actively files in other jurisdictions and the filing and annuity payments easily increase the overall spending by multiple times.

While we don’t have the exact number for IBM’s global IP revenue, IBM’s annual filings indicate that the company’s IP revenue in the order of $1B, generated mostly from licensing and sale of patent portfolios. It is very difficult from outside to figure out if the company’s IP as a business unit is profitable, especially if we consider the cost of the internal IP operations including the inhouse team, search team, licensing team, software and other tools, travel expenses, …. But it is understood that a big part of this spending is to protect the existing products and their market share in the jurisdictions that the company has ongoing business and customers.

One of the questions that have been circulating in the IP community is whether USPTO might lose some of its long term clients or if its revenue would go down in the coming years if companies see their IP spending has limited impact in the long run because of the recent challenges of enforcing their IP rights.

Another question is about filing activity in the era of AI and access to big data. For example, is this the right strategy to file 9000+ patent applications each year given the fact that more than 90% of these patents are going to expire worthless? Can we use AI to target the filings based on future trends? Is this high filing activity partly for marketing purposes and to establish the company’s brand as a top innovator or is it to generate licensing revenue?

We have built similar models for PTAB and trademark as well but we are still testing them and they are not as accurate. The goal is to help law firms and companies compare their IP revenue or spending with others as these models become more reliable and accurate.