3rd Thermodynamic Law Applicate in a Power-Plant Device. The Reaction at From of the Action. New Torque Power. It’s a simple Plus Formula of the Interaction of the Two Powers: 1/Action, + 2/Reaction = Retrodynamic. / For every action there is an equal and opposite reaction. 2 Forces in 1 System.

It is the sum of both (two) Forces - one to other / Are two Forces in one system.

Retrodynamic Effect, are two Forces Actives in one system.
It's like when the Star Trek Enterprise Spaceship Accelerates into the depth of space but spinning 2Two Opposites Forces (Like the Ying-Yang Concept) on a Central Axis in a Rotary Manner Way. 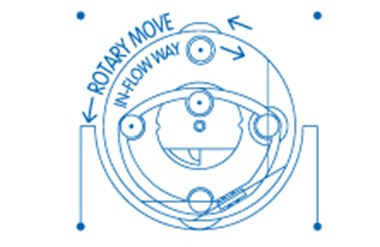 Share
Previous Post
Next Post
Carlos Barrera*New Math Symbol: I deal with the Requirements of a new mathematical symbol, in order to explain the Retrodynamic Phenomenon that occurs in an invention that I am developing. It is called the "Retrodynamic Effect" and it is created by having a situation of an axis turning in the opposite direction in a rotating system and in this way a great force is created. And there is currently no mathematical symbol that can explain it.
Mar 19, 2022
Carlos BarreraIt's because I'm talking about something that you can't even think is physically possible.
And in my invention ·1-Gearturbine: I present it already in a system that works in a mechanical Efficiency simple way.
You can appreciate it simply by following the direction of the internal flow, opposite in favor of the blade/Planetary Gear.
And contrary to the Rotary Move. Thats Retrodynamic.
Just Follow the the Dynamic Motion at the cycle System.
It's not only concern of one force/Action. Are two forces:
Action +Plus Reaction = Retrodynamic
Mar 19, 2022
2nd Annual Patexia Mixer