Search
Daniel PorterDec 21, 2012Science and Technology
Pros and cons of patents and prizes 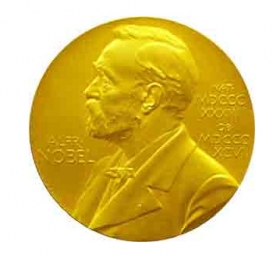 "In a sense, the patent system is itself a prize system, albeit a peculiar one."

In a 2007 paper Joseph Stiglitz, Columbia University professor and former World Bank chief economist, argues for more generalized use of prizes to stimulate and reward innovation. The peculiarity of the patent system that Stiglitz refers to is that the reward for innovation is in the form of a monopoly, preventing competitors from entering the market and allowing society's innovators to benefit from the ability to set prices for a set period after a patent grant. Stiglitz is a prominent voice on one side of an ongoing debate about the best way to incentivize innovation. We continue to see more and more signs that the patent system has become unwieldy in recent years. In the search for a better system, arguments for offering up-front prizes rewarding successful solutions to particular problems seem more and more convincing. The X-prize and other prominent contests offering prizes for major achievements and innovations give tangible examples of how powerful prizes can be. A recent McKinsey report arrived at a similar conclusion to Stiglitz's: that prizes are a "unique and powerful tool," particularly in the hands of philanthropists looking to incentivize large-scale social change.

This article will delve into the two sides of the discussion. Though neither large prizes nor patents are a perfect form of incentive for every type of innovation, each serves an important purpose. Stiglitz holds that "we cannot get innovation without paying for it." But to get the most value for our investment, each strategy, and in some domains a combination of the two, should be considered as we continue to reward the world's innovators.

A system composed of just patents or just prizes is clearly not optimal. They both have drawbacks.

In the case of patents, the biggest argument against their use is inefficiency. Patents are  fundamentally about the restriction of knowledge, particularly a restriction on the use of knowledge. During the period where the inventor benefits from the monopoly the patent affords, others who may otherwise benefit from the knowledge do not. Because there is no cost associated with freely distributing the knowledge contained within a patent, withholding information (or the ability to practice it) simply means that potential benefit is lost for all but the patent's inventor. Competitive market forces cannot act to maximize efficiency and drive down prices. Patents are fundamentally not as efficient as they could be. Further, patents depend on the innovator's ability to reach the potential market. Using Stiglitz's example: people in the Third World with no access to brand name drugs may benefit from local generic makers if not for patents on these drugs. Another common argument against patents is that there is no particular incentive to solve social problems that may offer no other financial benefits.

Prizes, on the other hand, also have a variety of pitfalls compared to incentives in the form of patents. The most important practical barrier is that these incentives require large up-front costs on the part of the prize sponsors. Many recent prizes, and many of those that are the focus of the McKinsey report, were offered by wealthy philanthropists who independently undertook the costs of offering a particular contest. The problem is that this leaves the task of "picking and choosing" innovation to a select few. To implement this system on a large scale would mean sponsorship by a government or large organization that would decide on and distribute prizes for innovation more equitably. This would mean prohibitively large costs for taxpayers. The prize route also means that the innovator could not be held accountable for the success or failure of their inventions: the prize could be wrongly rewarded before there is adequate infomation about the success or failure of that invention. 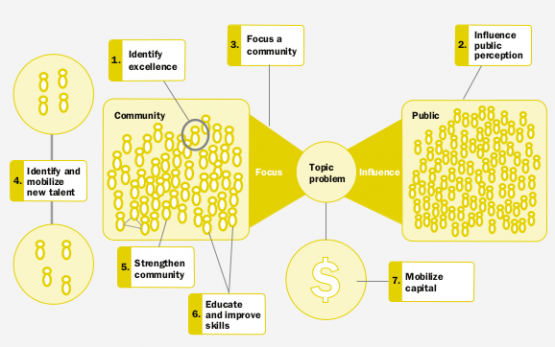 Figure: "Seven ways that prizes deliver change," from McKinsey's "And the winner is..."

But each has a long list of benefits as well. I'll be the first to maintain the benefits of a properly functioning patent system, as I've discussed in previous articles. The protection they provide while maintaining wide dissemination of information has clearly been beneficial to the growth and proliferation of technological innovation and expertise, particularly in the United States. That said, the McKinsey study found that prizes offer society a variety of new ways to promote change: "not only by identifying new levels of excellence and by encouraging specific innovations, but also by changing wider perceptions, improving the performance of communities of problem-solvers, building the skills of individuals, and mobilizing new talent or capital." They also offer the significant advantage of distributing small risk to a large number of participants, rather than a particular sponsoring organization, meaning that prizes offer a much better chance of addressing some of society's more pressing problems.

The best of both worlds

Stiglitz argues for prize-based innovatin in a particular sector: medicine. The main reason for this is that pharmaceutical spending heavily favours the first-world and products to make our lives slightly longer and more convenient, while essentially ignoring major health concerns that threaten a near majority of the world's population. In my mind there's no doubt that prizes have a lot to offer in these types of fields: where there is otherwise no major motivation for innovation. Prizes have the unique ability to make us stretch our imaginations, and this will always have signifcant value. On the other hand, offering prizes for the next major consumer electronics innovation also seems silly given the significant advantages to simply being the first to innovate in many of these domains.

Still, there are a lot of problems in between, and we should be open to "middle ground" solutions as well. Small-scale prizes to solve small-scale patent problems is one way we think these ideas can benefit society, but there are many other potentially beneficial possibilities exist.