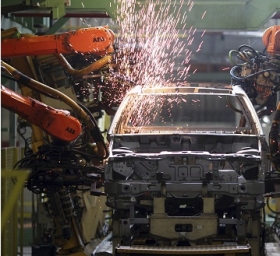 The elephant on the production line is robotics. Not will robots raid manufacturing plants and steal jobs, but rather will the U.S. adopt and adapt fast enough to robotics. Fast enough to steal things like consumer electronics back from China. And positioned well enough to secure a leadership role in the coming wave of smarter, more agile robots destined to build more than just cars.

Worldwide, approximately 150,000 employees manufacture robot systems. A secondary group of installers, systems integrators and in-house skilled technicians double this number, according to a Metra Martech study. So we have 300,000 total jobs in robotics across the globe. The Economic Policy Institute reports California alone has had almost 475,000 jobs displaced over the past 10 years due to the U.S.-China trade deficit. Blaming China’s currency manipulation and low-wage labor, The EPI claims 2.1 million manufacturing jobs have been displaced in the U.S over the same 10-year period.

Getting back to robotics, Metra Martech estimates one technician is needed for every 10 robots. And a working estimate says one robot can replace two humans. The International Federation of Robots reports up to 1.3 million robots are in production today. Although 365,000 of those bots work in the automotive industry, future industrial hotbeds include medicine, pharmaceuticals, electronics, renewable energy and food and beverage. Simple math indicates job displacement is inevitable, regardless of whether you are a Luddite or a futurist.

“If you work in an American manufacturing company today, you should be worried about your job,” Robotic Industries Association president Jeff Burnstein opined in 2010. Burnstein added in his Bloomberg Businessweek defense of robots that he lives in Michigan, a state decimated by closing factories and offshore job migration. Paul Krugman, op-ed specialist at The New York Times, noted Apple, despite having the biggest market cap in the world, employs just 43,000 people in the U.S. Certainly not a disservice by today’s lean corporate standards. But, according to Krugman, a tenth of what General Motors employed when it was the biggest company in America. Wayne County, which includes Detroit and General Motors, still carries an unemployment rate of 13.4 percent. And Steve Jobs famously told President Obama the iPhone and iPad manufacturing jobs aren’t ever coming back from overseas.

A U.S. manufacturing anchor, and a company that profits over $400,000 per employee either hemorrhaging jobs or void of any real domestic manufacturing presence. Both Michigan and Apple illustrate the middle class dream of lifetime employment powered by made-in-America pride looks broken. Depending on the source, that dream has been broken a long time. Burnstein and his pro-bot peers think robots will reinvent our manufacturing base, creating jobs in the process. Only with a twist.

Meanwhile, a groundswell of new, innovative robot makers and suppliers will cluster and feed each other. Similar to the way China and Germany now cluster and thrive despite radically different payrolls. Bots need to be developed and programmed, creating new job titles and nudging education to develop more engineers, industrial designers and robo-code ninjas. They also need to be serviced. So technical schools and government programs will offer fresh curriculums promising jobs and security. 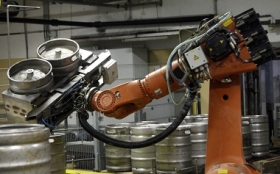 In short, a new ecosystem will hatch robot startups. Boost existing companies with new opportunities and skilled workers. And retool antiquated factories in a menagerie of industries.

Thousands of jobs for the willing, they say. U.S. manufacturing is back.

But when we see photo essays of Tesla robots cranking out eco-luxury vehicles. Or online video of Gilt Groupe warehouse bots moving giant shelves of designer shoes around in choreographed unison, you just don’t see a lot of people. Not many paid employees with benefits and pension plans. Even watching President Obama geeking out at Carnegie Mellon University’s National Robotics Engineering Center had something missing. And John Dulchinos, CEO of Adept Technology -- the largest U.S. industrial robotics company -- claimed that “people are dirty” in an interview with IEEE Spectrum. Dulchinos explained that grubby hands, for example, could contaminate disk drives during assembly.

So that’s the twist. Humans in many robotic applications just get in the way. Making us believe this robot job savior thing is a farce, or an illusion. Or maybe, it’s just getting started.

Because robots were once isolated like caged animals, collaboration between man and machine remains an industry challenge. Commercial robots are still considered dumb and programmable. And potentially dangerous. Therefore, technologies for vision and tactile sensing must evolve to meet the industry’s vision of a safe working environment with man and machine working side by side in perfect harmony. As for pure integration, watch a Porsche being built and you’ll sense the Germans have found the right mix of humans and robots.

Beyond the hygiene dig, Dulchinos did provide IEEE Spectrum with some veteran insight and sees a market well suited for U.S. innovation. His projections have the robotics market rocketing from today’s $5 billion to $100 billion by 2020. The U.S. pioneered robotics, but lags behind Japan, Korea and China in R&D investment. And Dulchinos mostly claims we’ve lost jobs to cheap labor and other offshore incentives, not robots. Don't blame the robots, embrace them.

So, based on industry theory, productivity gains and quality control -- accomplished using robots -- are the only way to get the work back and, at least, some of our manufacturing jobs. A robust domestic market would inspire complimentary products and services while entrusting our university labs to mastermind high-performance, friendly robots. In other words, a lot of people working because of robots - just not many on the shop floor.

But let’s not confuse increased productivity with job growth, as automation has proven central to our jobless recovery. Another argument is the U.S. should stick to design, branding and distribution and wipe our hands clean of the grimy manufacturing process altogether. But considering the U.S. still makes Boeing 747s and Intel chips, robots making long lost things like consumer electronics in the U.S. again seems doable. And for stimulating job growth, an attractive zero-sum game.