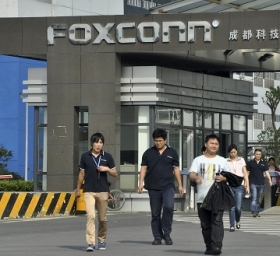 Replacing cheap labor with a million robots is a curious fix to China’s economic downturn. Especially when that cheap labor is employed by a Chinese growth engine and skilled in the art of making iPhones and iPads. And already living a robotic life. Foxconn, the company in question and China’s largest private employer, wants to automate the assembly of consumer electronics like Germany has automated the BMW. It seems Apple artisans willing to endure neo-Dickensian work conditions aren’t even robot-proof.

Retooling a manufacturing complex like Foxconn – massive, dominant and responsible for a sizable chunk of today’s gadgets – with movable arms, pressure sensors and lasers requires a mighty plan. A move to stone-cold automation sabotages China’s labor advantage and threatens a cultural edict that elevates hard work to a national pursuit. Suffering in the name of the company is part of the collective ideal, or at least a barometer of global success.

Leaner manufacturing does soften China’s sweatshop reputation and nudges its manufacturing complex up the value chain. More sophisticated products designed by in-house engineers are the orders from above. And moving workers up the value chain is imperative because manufacturing is a low-margin business. Design and retail is where the money is at and Foxconn doesn’t have to look far for motivation. Apple designs iDevices and then sells them, banking huge margins with minimal sweat. Foxconn does all the dirty work.

But simple math and Western logic put thousands of Foxconn laborers on the street. And pushes the cheap labor advantage deeper into Malaysia and places like Cambodia or Vietnam eager to take China’s place as the world’s low-cost provider. Foxconn and other like-minded manufacturers in China hire mostly teenagers and twentysomethings direct from poor, rural areas. With limited education and soon-to-be antiquated skills, it is doubtful Foxconn’s current roster is any match for a new generation of college grads with the hopes and dreams of a superpower riding on their backs. Programming bots to work error-free 160-hour weeks doesn’t count as a stretch goal for someone trained to make a smartphone white or black.

And analysts and activists both agree, in this case, ridding Chinese factories of the human element may be a step in a more sustainable, humane direction. In fact, both Foxconn and Apple have been under the microscope for fostering a self-contained world of brutal hours, broken dreams and suicide jumpers.

Most of the media attention has focused on a Foxconn’s factory in Shenzhen, a campus with cramped dorms housing workers that mostly just work. Reports of unpaid overtime, labor unrest, overzealous supervisors and double-digit suicides have cast a shadow on China’s manufacturing utopia. Meanwhile, these young, alienated laborers – the apparent victims of abusive practices - are learning the grass is greener, heading back home to work in factories closer to family, and closer to a real life.

So the Chinese labor supply is being squeezed and this upward mobility comes with a price.

Labor costs in China are rising along with a weaker demand for exports. Chronic defects and unpredictable shipping costs have forced smaller U.S. companies to find local manufacturers. And as manufacturing pushes into the interior of China, subcontractors have been accused of pirating designs and getting lost in the supply chain. Robots and sci-fi automation have graduated from labs to factory floors in developed countries, realizing the kinds of savings Foxconn hopes to achieve in the future. But nobody is feeling sorry for Foxconn.

Terry Gou has proven an astute gambler, moving his manufacturing operations in the late 1980s from Taiwan to a virgin labor market in Shenzhen. A cowboy move at the time, considering a lack of infrastructure and a Communist regime bent on making operations tough for an outsider.

Gou has since hustled big business from the U.S., Japan, and his native Taiwan, while building a contracting empire through a self-reliant business model powered by sheer tenacity. Foxconn’s parent company, Hon Hai Precision, placed 43rd on the Fortune Global 500 rankings, cranking out $117.5 billion in revenues. Making Foxconn, the seasoned pro with deep pockets, a perfect guinea pig for a robotic overhaul. Gou has the muscle to absorb such an undertaking. 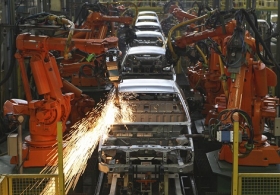 And the robotics industry smells blood in China, eyeing a market for industrial robots supporting a nascent auto industry. But robots making the latest gadgets from Samsung, Nintendo, Microsoft, Sony, and just about anybody competing in the consumer electronics race is a natural fit. The International Federation of Robotics thinks China bots will surpass both Japan and the U.S. by 2014. IFR president Shinsuke Sakakibara says “there will be Chinese robot suppliers in the future.” For Foxconn that future is just around the corner.

At this point, Foxconn plans to engineer its own robots. Important considering a million production robots would nearly double the world’s current supply. Gou seems to have modest plans for his robots, doing grunt work like spraying, welding and assembling. And his million robots would be gradually introduced to the assembly line. So don’t plan a jailbreak from the factories just yet. But Foxconn has also been evasive about his internal robot designs. A conservative approach considering China’s copycat nature and perceived lack of innovation.

So Chinese manufacturing is at a crossroads, battling demons and pressures that have tempered runaway growth. Bringing manufacturing back to the U.S. is possible, in measured amounts. Niche companies are now willing to pay a premium for staying local, even tweaking designs to meet a robot’s capabilities. Constant iteration has sparked a stateside revolution in cost-cutting measures. Smarter materials, more agility, and speed to market are all byproducts of full automation inspired by China’s inability to serve smaller volumes from smaller players.

But Apple – married to big margins - will continue to offshore and downplay criticism as long as it makes economic sense. China’s contract manufacturers will always prioritize bigger volumes, even offering perks when necessary. And Foxconn is already migrating core operations inland, on a hunt for China’s cheapest labor.

Terry Gou keeps building, planning and toeing the company line of going vertical into higher-profile, more profitable ventures. At the same time, getting workers off the factory floor and into more professional gigs associated with a more mature economy. Robots, design, engineering, or whatever it takes. According to China, it’s now all about moving workers up the value chain. It’s all about bigger margins.

So China Inc. is not dead. It’s evolving, developing and obedient to another 5-year plan littered with challenges. And part of that is rationalizing Luddite fears that robots will steal your job.