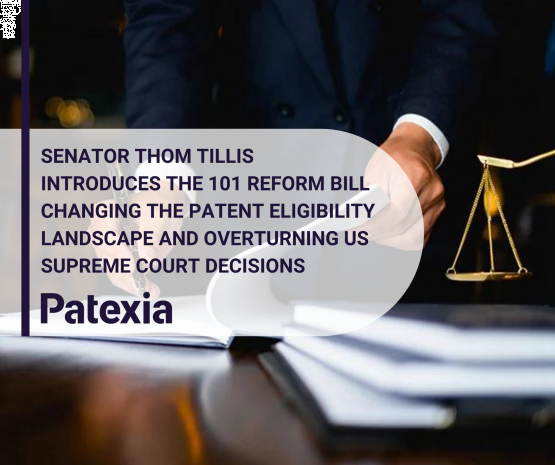 Amidst growing concerns that China is eclipsing the U.S. with R&D and patents in emerging new technologies, the Chairman of the Senate Judiciary Committee's Subcommittee on Intellectual Property, Senator Thom R. Tillis announced a couple of weeks ago a proposal to reform the text of 35 U.S.C. § 101. This is the second time he has attempted to reform Section 101 of the Patent Act after the first proposal was released in May 2019.

After having conducted several patent reform hearings, Senator Tillis joined forces with Chris Coons, a Democratic U.S. senator from Delaware and ranking member of the Senate Judiciary Committee's Subcommittee on Intellectual Property, to come up with a bill proposal. During the hearings, they found out that the U.S. The Supreme Court had confused and narrowed Section 101 of the Patent Act that regulates patent eligibility, up to the point that it’s harming innovation as investors are withdrawing from projects in areas where obtaining patents was becoming harder. This initiative however seemed to fail, as later that year the process was stalled due to a lack of consensus and refusal to compromise from the stakeholders. But why is there a need for such a reform in the first place?

Section 101 is perhaps the most important part of the Patent Act since it defines the kinds of inventions that qualify for patent protection. Its intention is to encompass a wide range of inventions, broad and flexible. Yet, over time, several decisions from the Supreme Court have created exceptions. It all began with the Mayo vs Prometheus case decision, which unanimously held that claims directed to a method of giving a drug to a patient, measuring metabolites of that drug, with a known threshold for efficacy in mind, and deciding whether to increase or decrease the dosage of the drug, were not patent-eligible subject matter. This has been quite a controversial decision in the biotech industry with its supporters claiming that this will free pathologists to practice medicine without fear of being accused of infringement, while the critics claim that decisions like this destabilize patent law. Again in the biotech industry, Molecular pathology vs Myriad Genetics made headlines back in 2013. Two breast cancer genes were discovered and diagnostic tests related to them were developed. Despite the importance of this discovery, the court determined that this was insufficient to be patented.

Another landmark case, but this time in the field of computer science, was the one involving Alice and CLS Bank. The Supreme Court held that computers performing computer functions can’t be eligible for patent protection. However, since 2014 when this case was closed, the concept of software and software patents has evolved. Even the USPTO after 2019 decided to work around this decision by providing guidance that added clarity to the eligibility criteria for computer-related patent applications. The decision, however, has faced criticism as the rejected software patent applications skyrocketed after it. Furthermore, because of Alice, many business-related patents are rejected as well, not to mention a great deal of previously granted patents that are now invalid.

All of the above cases, though the original intention was for their decisions to be applied as narrowly as possible, in reality, have impacted the progress and innovation in R&D-intensive industries. Technological fields, such as AI or genetics, where research is extremely important to keep the U.S. a leader in innovation, might stall as most of the inventions may not be eligible for patent protection. When making R&D decisions, investors and innovators must be able to rely on clear and strong patent law to have a guarantee that they can profit. This is why Congress has been actively looking for bipartisan legislation in order to come up with proposals to reform Section 101. Many thought that the bill released by Senators Tillis and Coons in 2019 was a good place to start. However, with the stakeholders disagreeing on too many issues, especially regarding patent eligibility and what it should consist of, the bill needed revision. The new bill released just the previous week seems to have been revised. The bill aims to clarify patent eligibility in particular and override the Supreme Court’s exclusions as well as set a middle ground to bring together stakeholders with different interests. It is impossible to be able to satisfy everyone with just one decision though, and any revisions of Section 101 should be done very carefully, otherwise, they will have the same unwanted effects on innovation as the Supreme Court’s decisions.