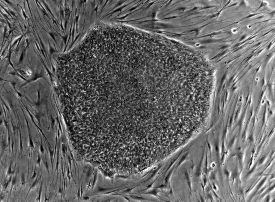 In the mid-1990s, James A. Thomson from the University of Wisconsin-Madison developed an innovative technique that led to the development of primate embryonic stem cells. On January 19, 1996 the University of Wisconsin’s Wisconsin Alumni Research Foundation (WARF) filed this patent for Primate Embryonic Stem Cells, patent number 05843780. On December 1, 1998, the patent that would dominate the world of embryonic stem cells was approved.

The ability to patent biological life was made possible in 1980 by the court case, v.+Chakrabarty&;hl=en&as_sdt=2,34&as_vis=1">Diamond v. Chakrabarty. Ananda Mohan Chakrabarty, who worked for General Electric, had created a new form of bacteria that could be used to clean oil spills. Originally, the patent examiner denied General Electric’s patent, but in a 5-4 ruling, the Supreme Court upheld the patent by claiming, “a live, human-made micro-organism is patentable subject matter.”

This ruling made it possible to patent life, including bacteria, virus, plants and non-human animals in the United States. When Thomson developed the first long-sustaining primate embryonic stems cells in 1995, WARF patented it. This patent was followed with two other stem cell patents issued between 1998 and 2006. It should be noted that WARF tried to patent embryonic stem cells overseas in Europe, but the patent was refused on moral grounds. Europe, unlike the United States, has a moral component to its patent application.

This patent, the initial one issued to WARF in 1998, is considered very broad in both the cells it covers and methods for generating these cells. It effectively gave WARF control over all primate embryonic stem cells (including human) within the United States. This monopoly allows WARF to play gatekeeper.

Unfortunately, there is some evidence that this monopoly on primate embryonic stem cells has stifled scientific progress. To date, WARF has only made 27 licensing agreements with other companies, though it has provided over 300 academic intuitions access to its stem cell lines. The lack of interest by other companies is not surprising when patent fees are around $75,000 to $250,000, plus annual payments and royalties.

Therefore, much of the debate has not surrounded the ethical issues of embryonic stem cell research; instead, the opposition argues against the monopoly created by the broad scope of the patent.

Consumer advocacy groups brought legal action against one of WARF’s embryonic stem cell patents in 2006 by claiming that the research conducted by Thomson was the logical next step in embryonic stem cell research and, therefore, should not be covered by a patent. This argument comes from the idea that the researcher must have made a significant innovation to be granted patent rights. The court originally upheld the patent until 2010, when the courts agreed and struck down the patent. However, the original patent, which is the broadest in scope, patent number 05843780 from 1998, is still effective.

While the court case did little to release WARF’s monopoly on embryonic stem cell research in the United States, public pressure and market forces have caused WARF to liberalize its patent policies -- most notably by allowing academic institution free access to the cell lines and granting licensees that WARF claims are given at an economic loss.

The research behind the patent represents a real innovation and step forward for medical research. The human embryonic stem cells developed by WARF can be turned into over 200 different types of tissues. This makes the stem cell line very promising for future medical advances. Moreover, WARF has begun to liberalize its policies towards the patent. WARF allows academic institutions free access to their cell lines and has narrowed the scope of their patent to only include certain hESCs. This liberalization should make research more accessible to more institutions.

Unfortunately, the scope of this patent is still very broad, and the licensing demands of WARF are still very expensive. This has probably prevented many companies from pursuing embryonic stem cell research, and there have been a few examples of researchers moving overseas to escape WARF’s patents. Moreover, the precedence of this patent might provide a model for other companies to patent and monopolize other areas of biological life; this will most likely hurt scientific progress and limit a patient’s choice in medical testing and treatment.