Silicon Valley’s “unicorns” or startups (pre-exit) with a valuation exceeding $1 billion, have been drawing non-stop press with their rapid growth and enormous valuations for companies of their age.  However, recent research conducted by the Foresight Valuation Group, has taken a look at the patent positions behind these companies, and uncovered some concerning trends.

Unicorns are no longer the rare breed they once were, and according to the TechCrunch unicorn leaderboard, the number of unicorns has recently crossed the 150 mark.  The majority of unicorns are concentrated in three industries: Internet, ecommerce and software, and include big names such as Uber at $51 billion and Airbnb at $25.5 billion.

For companies to show long term success, one of the key factors is their intellectual property (IP) foundation, something that should be no different for these mythical ventures with their formidable valuations.  But does their IP really stack up?

Foresight Valuation Group specializes in analyzing and valuing IP as a strategic business asset, and in that vein has completed an assessment of the most recent list of unicorns, delving into the patent position of these companies, and any correlation this position has with their valuation.

A few notes on the methodology: The analysis was not exhaustive, and was based on a patent count of issued and pending U.S. patents. To avoid bias and country specific issues, the study was limited to U.S.-based unicorns (95 out of the 151 listed, based on TechCrunch’s own country designation). Since U.S. patent applications publish only 18 months after filing, there may be relevant forthcoming patents that have not been published yet. It is also possible that some companies on the list might not have their patents assigned to the company’s name, which would result in the unicorn being listed as having zero patents. Finally software companies do tend to have smaller IP portfolios as compared to other companies in industries such as pharma, biotech or hardware.

Given the age of most unicorns (the median for this study was eight years), it was not reasonable to expect a fully developed and mature patent portfolio, like one that might be found in an operating company with decades of R&D to its name.  That being said, these are companies with extensive resources at their fingertips (median funding of $277 million) and it would seem reasonable to expect them to develop a solid intellectual property foundation that could mature with the company, as it grows and potentially goes public.

Given the size and value of the unicorns analyzed during this study, the results were surprising, showing a significant “IP gap”.  In fact, of the unicorns examined, 61 percent had 10 or fewer patents (issued and pending) to their name. To top that, 30 percent had no patent assets at all!

The chart below present the IP Gap by industry, across 5 main buckets: Consumer Internet, E-Commerce, Financial Services, Software and Others.  The “Consumer Internet” industry (which according to TechCrunch spans a wide range of companies, such as Uber, EventBrite, SnapChat and Airbnb) represents the sector with the widest IP Gap.  With 33% of the cumulative funding and 38% of the overall valuation, this group of companies collectively holds only 8% of the patents: 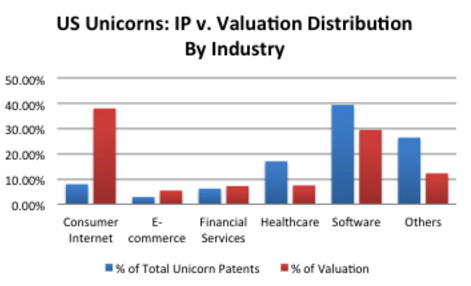 So What About The Gap?

These findings clearly indicate that IP may not be a critical component of the business strategies of these companies, and may not play a make-or-break role in either funding or valuation.  So should IP matter to unicorns?  And should unicorn investors be alarmed by the gap?

At the moment, these companies are clearly going strong with or without a solid foundation in IP. But the short term focus could obscure a number of points going forward where an underdeveloped IP portfolio could prove to be a problematic stumbling block, especially as these unicorns approach their exit point, or as they enter new markets.

Under the post-America Invents Act (AIA) “First to File” patent regime, unicorns that don’t patent early could easily lose the option to patent their core inventions , and may be left with no option but to make up for it through purchases, either of key patents directly, or of companies holding the patents needed.  With an infringement suit or other competitive threat in play, these companies could find themselves spending hundreds of millions of dollars to fix a problem after the fact, which could have been avoided with a more strategic and gradual approach to building a patent portfolio that is aligned with the valuation of the company.

There are several key points where a company with an abnormally high valuation is left particularly vulnerable by a weak IP position, notably as they try to enter a new market or approach an exit point such as an IPO.  There are a number of good examples where companies have had to quickly and very costly amass an IP portfolio at such strategic junctures.  For one, Google paid $12.5 billion in 2011 to acquire Motorola Mobility in response to a clear need to grow its IP portfolio to successfully enter the mobile market (after finding itself on the losing end of the Nortel patent auction). The competition that it faced from market incumbents with strong IP positions left Google at a disadvantage without the time to build its own portfolio.

Facebook is a second cautionary tale for unicorns.  As it approached its IPO, the unicorn was hit by a patent lawsuit filed by Yahoo. With few patents in its arsenal, Facbook ended up paying hundreds of millions of dollars to amass a defensive portfolio of patents originated from AOL, IBM and Microsoft to fight the suit at hand and reduce future exposure.

There is a concerning IP gap present among the U.S. unicorn population.  While some of the unicorns analyzed in the study do seem to have embarked on the journey towards a solid IP portfolio, however as many as 61 percent seem to have fallen behind. While in the short term this lack does not seem to be getting in the way of valuation and funding, there is some potential turbulence ahead. It would be in the best interest of both the management and investors of these companies to take a close look at their IP position and analyze their potential exposure, particularly if they are planning to enter new markets or are approaching an exit event.