Search
Jovana GrbicJun 11, 2012Science and Technology
The lighter side of RNA interference 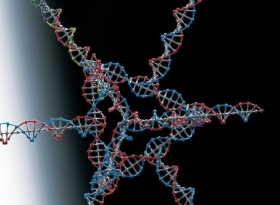 Researchers from MIT announced last week that they have engineered tiny particles made out of RNA and DNA, utilizing a technique called “nucleic acid origami,” that can deliver small interfering RNA directly to cancer cells and turn off specific genes necessary for tumor growth. The new DNA/RNA system, published in the journal Nature Nanotechnology, was outfitted with Vitamin B9, which many cancer cells (including ovarian) seem to have a selective predilection for.

RNA interference (RNAi) is a naturally occurring phenomenon in biology that regulates gene expression by translational suppression. Originally discovered by virologists in plant gene silencing for resistance to viral infection, siRNA occurrence was elucidated in a C. elegans model by researchers Craig C. Mello and Andrew Fire, for which they won a Nobel Prize in Physiology or Medicine. Since then, the role of RNAi in mammalian physiology has been shown to be critical for everything from aiding the immune system by suppressing viruses and other foreign genetic material, the downregulation of certain genes in development and maintenance of stem cells, and even upregulation of genes as complementary parts to promoter activation.  Efforts to replicate this intrinsic machinery have spanned functional genomics (gene knockdowns using synthetic siRNA libraries), genome-wide RNAi screening to identify genes necessary for certain phenotypes, and food engineering to help produce lower levels of known plant toxins.

The holy grail of siRNA is to develop medical applications, specifically against diseases.  Clinical trials for the treatment of macular degeneration and respiratory syncytial virus were among the first to show promise. Researchers hope to develop effective gene silencing treatment for pandemic threats such as influenza and other viral diseases such as HIV and Hepatitis. Gene therapy would be particularly fruitful for neurodegenerative diseases such as Huntington’s disease. The most realistic therapeutic hope lies in cancer, where researchers can already successfully quantify certain genes that are selectively overexpressed, and are therefore attractive targets.

Despite the enormous promise that RNAi holds for putative future medical applications, safety issues (including off-target interactions hovering at around 10%) and highly specific, efficient delivery of RNAi into deep tissue layers within the body. A high dosage level of siRNA, one potential way to circumvent this obstacle, has shown liver toxicity.

Many of the aforementioned challenges were overcome by the MIT researchers with this latest milestone. The biggest obstacle to delivering lab-synthesized siRNA in the past has been the difficulty in reaching target cells, as the short strands of genetic material get shredded by enzymes relatively quickly, typically about 6 minutes. siRNA delivery nanoparticles made of lipids have shown promise in reaching cancer targets in mouse models, but tended to accumulate in the liver, spleen and lungs, thus limiting target cancers. Furthermore, the safety of these nanoparticles has never been able to be established. By utilizing a 3D package made of DNA – which the body recognizes and accepts – the researchers had control over the composition of the particles and delivery targets, greatly increasing the locations, targets and even carrier molecules (such as proteins) that the RNAi tetrahedron can infiltrate. In mice implanted with human tumors, the tetrahedron protects the siRNA so well, that it was able to circulate in the bloodstream with a remarkable 24-minute half-life, more than enough time to reach desired tumor sites.

Despite a 40 year “War on Cancer,” 1.6 million new cancer cases and half a million cancer deaths are expected in 2012 in the United States alone, figures that are sadly not that different than when the war was still declared. A huge barrier continues to be effective therapeutic treatment, which until now has targeted the most rapidly dividing cells in the body through chemotherapy and radiation therapy. While certain recent therapies, such as Herceptin and Gleevec, successfully suppressed certain cancer-specific genes, more often than not, therapy is too general and often ineffective. More and more often, researchers are discovering genetic idiosyncrasies highly specific to individual cancers (even within a cancer family), making them separate diseases altogether. The ability to target a specific genotype cellular subset would not only be a game-changer for disease mortality statistics, but would also significantly ease therapy side effects for patients undergoing treatment.

The research team behind nucleic acid origami is now working towards targeting genes that promote tumor growth, as well as genes involved in other genetic diseases. It is not inconceivable that we may be on the brink of the era of highly targeted tailor-made treatments for individual cancers.