Among technology's previous generation of Next Big Things, we heard a lot of talk about the potential of NFC (Near-Field Communication). Smartphone manufacturers were excited enough to start putting NFC on over 40 production models in 2011 alone -- despite the fact that there were very few real-world applications. Google tried to jump-start NFC with an ambitious Google Wallet project, and Samsung's recently unveiled TecTiles hopes to make app-loving users excited about the possibilities. 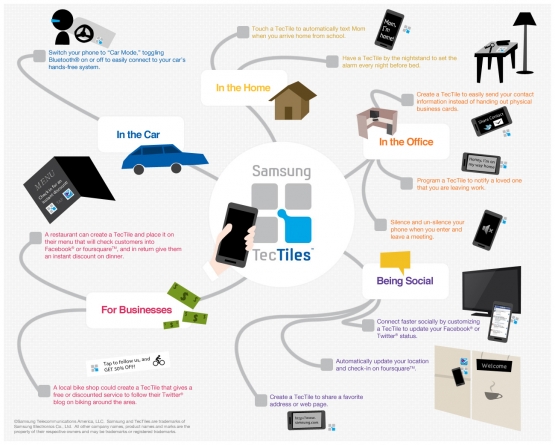 First, the basics. NFC is a form of RFID (Radio Frequency Identification) that operates in an extremely short range. NFC devices need to be (almost) close enough to touch, which reduces but does not eliminate external interference -- intentional, or otherwise. Unlike the similar Bluetooth specification, the NFC connection does not require pairing; any two devices can make a connection.

NFC has an 'effective' range of 10 centimeters; in other words, you need to get a pair of NFC devices (smart or dumb) within the 10 cm range (roughly 4 inches apart) to establish a connection.

The NFC devices can be active, such as two smartphones exchanging information, or one can be passive -- one smart device and one "dumb" NFC device. Passive NFC is similar in many ways to a smartphone reading a QR code; instead of scanning the coded information with your device's camera, you 'bump' the dumb NFC to receive the stored data.

Samsung's TecTiles take advantage of this passive NFC potential, essentially acting as stickers made of dumb NFC devices. Users can program these stickers to do a number of things, from uploading data to launching apps. While Samsung obviously wants to further their own brand, the TecTile app is readily available on the Android Market (whoops, I keep forgetting that it's now Google Play).

The TecTile app is used to program the stickers, and to reprogram them up to 100,000 times. What's less clear is whether third-parties will be able to take advantage of all of the potential functions. Any Android user can download the app, and I can see any NFC phone handling transfers of contact information and hyperlinks. Less encouraging is how Samsung made sure to say "almost" any NFC phone should be able to perform the majority of the tasks. I wouldn't be too surprised to discover that advanced functions are only possible on Galaxy-class starships.

A not-so hidden agenda is to get more people used to the idea of NFC-based payments. It's a convenient shortcut to carrying around cash or plastic, and the bump method of payment makes transactions faster and more efficient. Still, merchants are slow to embrace a new technology, and the costs of implementation that goes along with it. The NFC payment trailblazer, Google Wallet, has seen limited success in a handful of test markets. 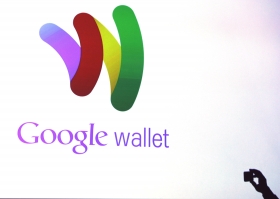 One might have predicted the strongest competition to come from rival Apple (or a Hail Mary pass from RIM, who needs a fourth-quarter touchdown very badly), but Google Wallet ended up facing its staunchest opposition from providers. Verizon, AT&T, and T-Mobile are keen on deploying Isis, their own take on the NFC mobile payment system (not to be confused with the LG spin-off Iris, an eye-recognition security company to which RIM has pledged itself for its own NFC payment aspirations. Confusing, I know).

This leaves Google Wallet only an option on Sprint devices -- a situation which must have been especially frustrating when Verizon was the sole US carrier of Google's branded Nexus smartphone. Luckily, the unlocked model and provider support from Sprint saved Google from the ignominy of providing a Wallet-less flagship. However, the first touchdown of the NFC season has remained "six months to two years in the future" ever since the specification was first developed -- approximately seven years ago.

Security is a touchy subject for NFC. The test run of Google Wallet didn't turn up any security holes, in part because of rigorous proprietary controls in the NFC-equipped smartphones themselves (although a cynic could also say that you can't get predictive data from a small market sample -- Apple fans were once fiercely proud about their brand's malware record, too). NFC seems uniquely suited for credentials, as a personal virtual passcard whose limited range makes sniffing difficult. Should DMVs and law enforcement get on board (don't hold your breath), we could see personal NFC ID cards as well. RIM has touted the secure ID aspect as the enterprise prong of its NFC trident, hoping to court a corporate user base that was (once upon a time) a foregone conclusion for BlackBerry.

On the other hand, security is not a foregone conclusion for NFC. Credit card companies have so far succeeded in downplaying the extent of the nightmare that is possible with RFID, but a quick search for "$8 credit card sniffer" may prevent you from bringing your plastic to public places ever again. One of my hacker friends boasted that a quick stroll through Starbucks could set him up for a year -- but then again, you never really know how much of hacker talk is just talk.

10 centimeters is not an insurmountable range for a back-pocket sniffer, but adding insult to injury is the fact that NFC radio transmissions can be intercepted from as far away as 1 meter from a passive (dumb) device such as the TecTile, and -- depending on the power that it's putting out -- up to 10 meters from an active device [pdf link] such as a smartphone.

Still, the NFC devices can certainly be augmented with additional security measures. In addition to the aforementioned Google Wallet protections, Samsung has implemented controls in TecTiles to prevent the programming being overwritten for malicious (or simply prankster) purposes. There's nothing to be done about the risk of someone just peeling off the stickers and running away, however.

As with QR codes, the possibilities for advertising and branding seem obvious, but all you need for a QR code is a few drops of ink. With MFC stickers, there is a significant cost factor -- at around $3 per TecTile, many would think twice before plastering them around town on bulletin boards and utility poles. A single advert in a single issue of Entertainment Weekly would cost around $6 million. I'm sure that Samsung (or any other dumb NFC manufacturer) could find a way to offer bulk discounts, but for the time being, TecTiles seem to be a much more consumer-oriented product.

RIM is doing its best to maintain cutting-edge relevancy by embracing NFC on current- and next-generation BlackBerry devices. The BlackBerry Music Gateway was proudly presented as providing music streaming via NFC, which was not EXACTLY a lie -- the actual streaming work was done via Bluetooth, just as BlackBerry has been doing for years. All NFC added was the option to make the Bluetooth pairing process a bit easier.

And this brings us back to where Samsung is trying to change the discussion. TecTiles will certainly have a place in traditional NFC applications -- exchanging contact data, providing point-of-sale commercial possibilities, etcetera -- but it's the focus on the lifestyle applications that form the core (if not the goal) of Samsung's long-term NFC strategy. In short, Samsung wants people to see the useful-but-creative side of NFC. The company is not burying them in autos and appliances, but handing us a sheet of stickers with an app that says "you decide."

Are we all to be Samsung's open-ended R&D team for NFC? That's one way to look at it, but the futurist tech nerd in me wants to see TecTiles as enabling (dare I say "empowering") us to integrate our personal technology with our environment.

This is the flip side of Augmented Reality. Instead of getting our smartphones to let us interact with the world in new ways by superimposing a virtual reality upon it, TecTiles give objects in the real world the opportunity to contribute to our digital lives. We want to personalize our surroundings, and bring new meaning to previously "dumb" elements of our day-to-day lives. It's a significant step toward embracing another long-awaited Next Big Thing: that polymorphous and IP-addressable world that we've dubbed the Internet of Things.

That's a tall order for something that, for now, is limited to tasks such as opening an app, turning on airplane mode, or sending a preset text. But increased consumer familiarity will spur interest, both from users and developers. Ironically, the power of the TecTile stickers is in their simplicity; unlike smartphones, the stickers will be just as good in six months, a year, or whenever subsequent versions of the app allow for as yet undreamed-of uses.

P. S., aren't we forgetting someone? Although conjecture is the rule for Apple until the new product is officially unveiled, the iPhone 5 is widely believed to bring NFC to a customer base that expects a higher level of innovation and creativity. The gang that brought us Siri is not likely to stop at mobile wallets and exchanging digital business cards (although when they do, it's likely to have more of a market impact than Google Wallet and Isis put together). It may very well be that the future of NFC's potential will come from Cupertino. But with TecTiles, Samsung has a fascinating head start, if anyone cares enough to explore it.