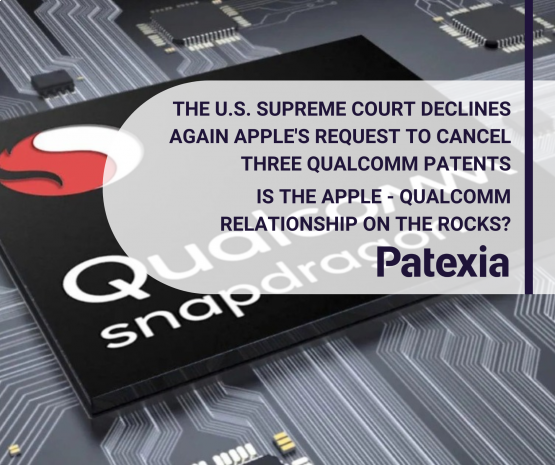 When Apple and Qualcomm finally settled their dispute back in 2019, eyebrows were raised given that the licensing agreement had a six-year limit and that Apple didn't include the ongoing PTAB proceedings in the settlement agreement. Earlier this month, the U.S. Supreme Court declined Apple's attempt to revive its efforts to cancel three of Qualcomm’s patents. But what does this mean for the Apple - Qualcomm uneasy relationship?

It all began in 2017 when Qualcomm filed a lawsuit against Apple in San Diego, claiming that iPhone, iPad, and Apple Watch infringed several patents of Qualcomm related to mobile tech. This started a major global dispute between these companies that lasts to this day. As part of the defense strategy, Apple decided to challenge the relevant patents through the USPTO Patent Trial and Appeal Board with several Inter Partes Reviews. However, in 2019 Apple published a press release saying that they had reached a settlement that included a global patent licensing and chipset supply agreement. This was effective as of April 1, 2019, and would last six years with an option of a two-year extension. Several analyses estimated that Apple had paid five to six billion for this licensing agreement, and since that year, Qualcomm’s stocks have doubled, seeing a decline only during 2022. In exchange, Qualcomm agreed to drop all the ongoing litigation; however, the PTAB proceedings continued as they weren't part of the deal. Ultimately the board upheld the patents, so Apple decided to appeal further to the U.S. Court of Appeals for the Federal Circuit. Apple used the argument that after the license agreement expired in 2025 (or 2027 if the extension clause is activated), they could be sued again by Qualcomm. Two three-judge panels dismissed Apple’s appeals based on the settlement agreement reached by the parties. However, Apple took matters further, requesting the Supreme Court to intervene, claiming that the royalties that had to be paid, the risk of being sued again, and the fact that Qualcomm hasn't renounced the right to sue again in the future justify the hearing of this case. The Supreme Court has now rejected Apple twice, the first time on June 30, 2022, and for the second time now, using the same arguments that Apple's risk of being sued again was speculative and the challenge would not affect its payment obligations under the settlement.

Will these decisions from SCOTUS put an end to the litigation, at least for the next couple of years between these companies? Or is this continuance of lawsuits a sign that the Qualcomm-Apple relationship is fragile?