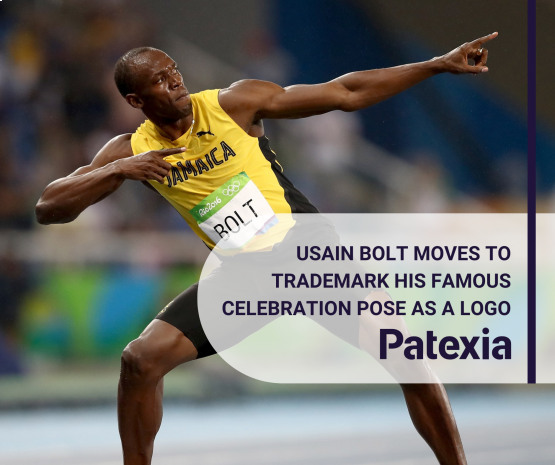 Who doesn't remember his distinctive running style, the several world records broken individually and as a team, but also his iconic celebration pose? According to the trademark application nr. 97552042, Usain Bolt is trying to trademark a logo of his silhouette with one arm bent and pointing to the head and the other arm raised and pointing upward, similarly to his celebration pose at the end of every race.

In the goods and services area, this logo is planned to be used in eyewear, different types of clothing, footwear, watches, entertainment, etc. The logo itself is similar to Michael Jordan’s logo idea, and it seems it will be used for similar purposes. This is not the first time this logo has been trademarked. As a matter of fact, there was an application in 2009, and it was registered in 2010. However, in 2017 this trademark was canceled due to the owner not filing an acceptable declaration under Section 8. This means that Bolt was unable to provide either a (1) document proving that the trademark is in use in commerce with the goods or services listed in the registration; or (2) the trademark is not in use in commerce due to special circumstances that excuse nonuse.

While it's true that Bolt is retired from his sports career, this seems like a move from him aiming to unlock the true value of his brand and look for business opportunities. In addition to the above, Usain Bolt filed an application for his signature to be trademarked, indicating that he plans to use it in several products, such as cosmetics, perfume, clothing, footwear, and headwear. Meanwhile, Usain Bolt already holds trademark rights to several versions of his name.