We also looked at the allocation of examiners at different tech centers and compared that to the most recent data on the application backlog. 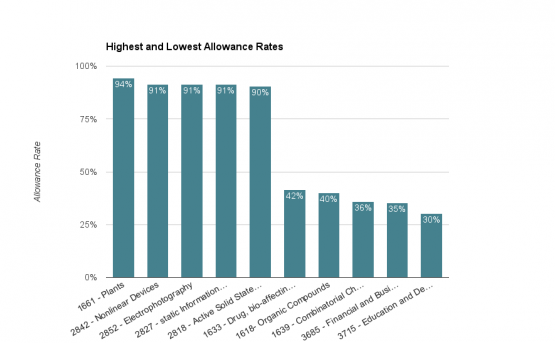 This study was based on the latest Patent Examination Research Dataset which was released on the USPTO website. To calculate the highest and lowest allowance rates, we only considered the active Art Units with total number of applications above the median of 5,065. We also excluded Art Units related to the Design Tech Center 2900 since the USPTO does not publish the applications or the stats for abandoned design applications.

We identified 8,742 active examiners at the USPTO that are currently working. In total, there were 15,534 examiners with a unique Examiner ID that at some point worked at the USPTO. We have recently released our Examiner Research Tool on Patexia which is available for free. Users can search all the present and past examiners. For each of the examiners, we have calculated the all-time allowance rate as well as the allowance rate before and after the first final rejection. This is a useful tool for patent prosecution attorneys and agents as well as in-house IP teams of corporations who would like to gain insights about the examiners assigned to their applications and the best strategy to increase the likelihood of allowance for their applications.

Among different tech centers, the Semiconductor Tech Center 2800 with 1,511 has the highest number of examiners followed by the Mechanical Engineering Tech Center 3700 with 1,202. 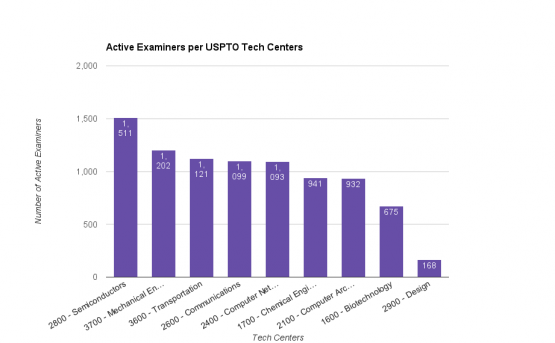 In terms of backlog and number of pending applications, Tech Center 3700 has the highest number with 148,207 applications pending. This data is valid as of March of 2016.

In the coming weeks, we plan to release more stats about the USPTO examiners and also identify the allowance rates before and after the first final rejection as well as before and after interview with the examiners. This would be a valuable resource for attorneys to learn whether talking to a particular examiner may be valuable or help increase the likelihood of allowance for their application based on the historical performance of the examiner. We compare this with the overall USPTO stats as well as the average for each of the  art units.

If you would like to see a particular analysis about the examiners or your patent portfolio, please let us know. We want to make this tool powerful and useful for attorneys, agents, examiners and in-house teams.