Search
Pedram SameniNov 16, 2016Legal
Patexia Insight 20: Comparison of the Art Units Allowance Rates before and after the First Final Rejection

We also looked at the top five art units with the largest increase in the allowance rate after the first final rejection. 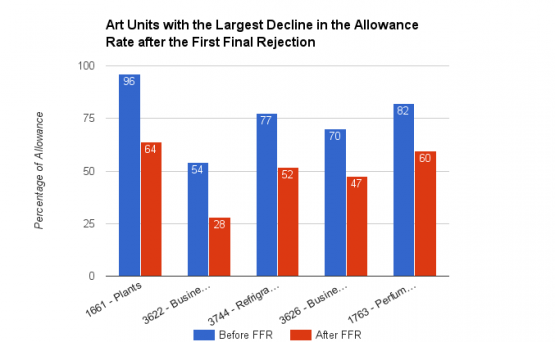 As we investigated, the data further confirmed that in many cases the examination outcome does not usually improve by filing more office actions.  Different art units seem to show different behaviors. Sometimes more office actions with stronger arguments result in better outcome and sometimes it does not change the outcome. 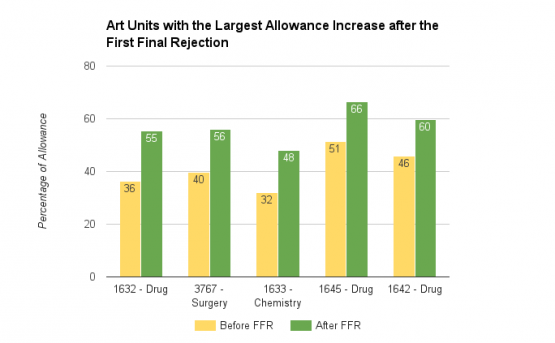 While we see different trends at different art units, the outcome also varies based on the examiner assigned to each application. We have analyzed the data for 8,742 active examiners that are currently working at the USPTO. In total, there were 15,534 examiners with a unique Examiner ID that at some point worked at the USPTO. We have recently released our Examiner Research Tool on Patexia which is available for free. Users can search all the present and past examiners. For each of the examiners, we have calculated the all-time allowance rate as well as the allowance rate before and after the first final rejection. You can compare those numbers with the art unit associated with the examiner as well as the USPTO. This is a useful tool for patent prosecution attorneys and agents as well as in-house IP teams of corporations who would like to gain insights about the examiners and art units associated with their applications and the best strategy to increase the likelihood of allowance for their applications.

This study was based on the latest Patent Examination Research Dataset which was released on the USPTO website. To calculate the highest and lowest allowance rates, we only considered the active Art Units with total number of applications above the median of 5,065. We also excluded Art Units related to the Design Tech Center 2900 since the USPTO does not publish the applications or the stats for abandoned design applications.