Last year we saw a sharp decline in patent litigation. Q4 ended with 21 percent drop compared to Q4 of 2015. In 2016, total of 5,086 patent lawsuits were filed across the United States. This is about 20 percent less than 6,364 lawsuits filed in 2015. The numbers are back to the pre-AIA levels (2011 and 2012). On the other hand, Inter-Partes Review (IPR) was strong and remained at the same levels as 2015.  In 2016 total of 1,637 IPR challenges were filed before the Patent Trial and Appeal Board (PTAB) which is almost unchanged compared to 1,655 challenges filed in 2015. Texas Eastern District Court remained as the most popular venue for patent litigation in in 2016. 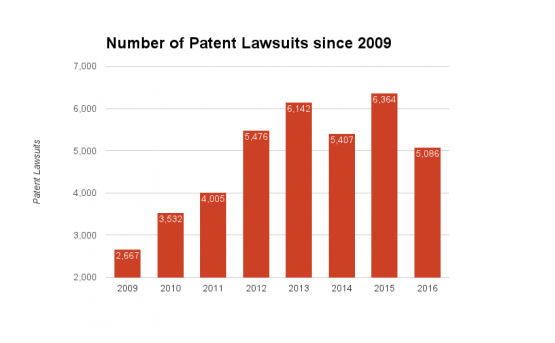 While the litigation has dropped to pre-AIA levels, it is worth mentioning that post-AIA numbers are generally magnified because of joinder rules. As we discussed in our Weekly Chart 7, total number of unique patent assertions has been declining year over year.

In terms of quarterly comparison, lawsuits in Q4 of 2016 sharply declined compared to Q4 of 2015. The increase in Q4 of 2015 was largely attributed to the US Supreme Court decision to adopt a proposal submitted by the Federal Rules Advisory Committee to basically abolish Form 18 for patent infringement filings. Many believe that this affected the drop in Q1 of 2016 as cases were filed ahead of that change in November of 2015. If this was in fact the reason, we should see an increase in 2017 relative to 2016 and the numbers should be back to average of 450 cases per month or about 5,400 per year. 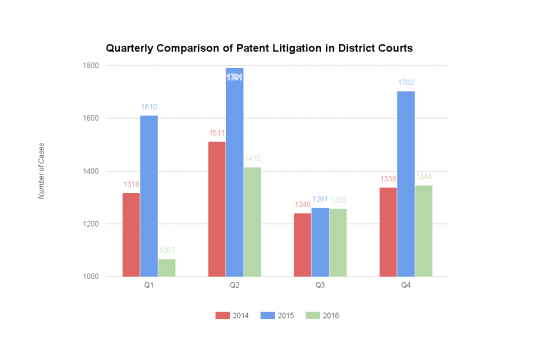 IPR filing has been averaging around 125 to 135 per month for the past 3 years and we expect to see the same range for 2017. As we showed in Weekly Chart 12, IPR is heavily used by a small number of companies and we believe this trend to continue in 2017. 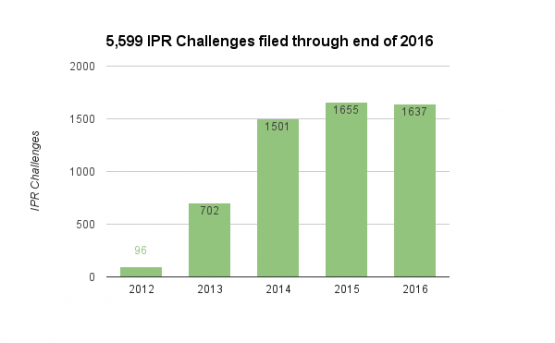 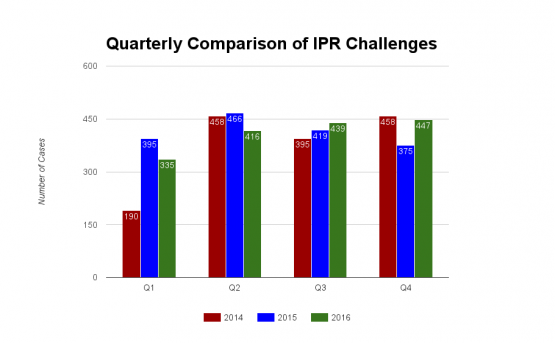 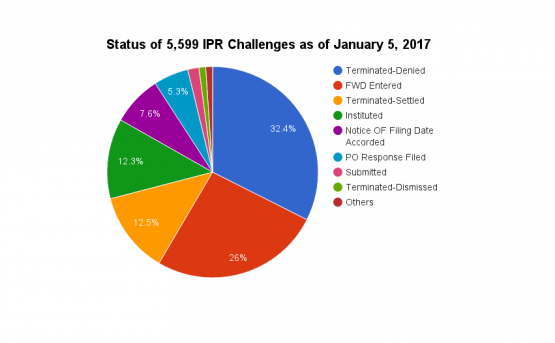 In 2016, Texas Eastern District Court with 1,697 cases remained the number one venue for patent litigation followed by PTAB with 1,637 cases. 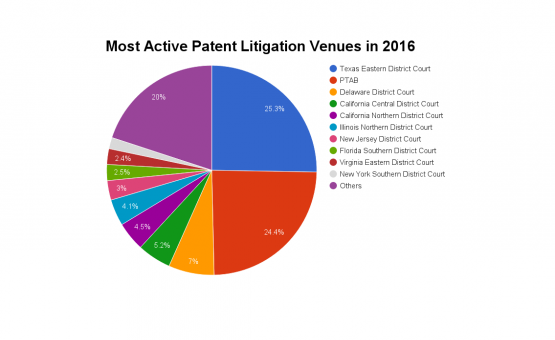 2016 saw a sharp decline in patent litigation compared to the previous year. We believe this was partially due to lower activity in Q1 of 2016. In 2017, we estimate the numbers to be back to about average of 450 per month or about 5,400 to 5,500 per year, which will be a moderate increase compared to 2016. In terms of number of unique patent assertions, we have seen year-over-year decline since 2010. In other words, the number of unique plaintiffs has been declining while the average amount of activity for each of the active plaintiffs has been rising. On the other hand, IPR activity has almost been unchanged at around 1600 per year. We believe this will most likely remain the same in 2017.

In December, we released a number of studies analyzing IPR challenges at the patent-level (Weekly Chart 22). We will continue this and plan to release another study on IPR success rate at the claim-level in the coming weeks. We also plan to release performance of top 10 law firms and attorneys for petitioners and patent owners.