A few weeks ago we reporteda sharp decline in patent litigation in 2016 of more than 20 percent. However, activity for Inter-Partes Review (IPR) remained basically unchanged (1,638 challenges were filed in 2016). Some suggest that there is a 6- to 12-month lag between IPR and district court litigation. Therefore, they believe that IPR filings should follow the litigation and drop this year. Time will tell if this prediction is accurate. However, for the time being, we looked at the top petitioners in 2016 and Apple, with 80 challenges, remained at the top, as in prior years. Samsung was second with 57 IPR challenges in 2016. We further compared the IPR filings of Apple and Samsung with their district court cases to see if there is any correlation between them. 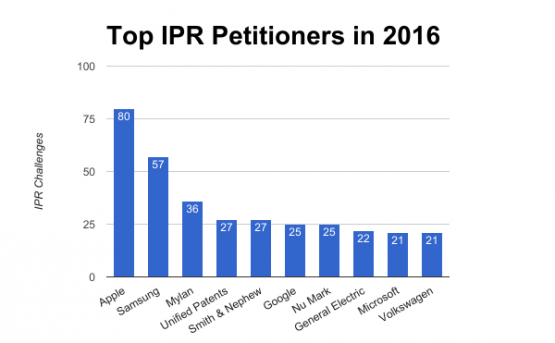 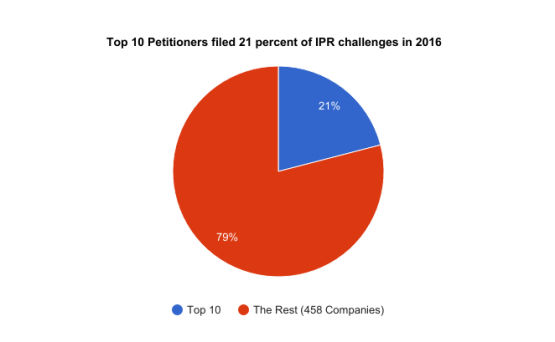 Since 2012, Apple and Samsung together have filed 442 IPR challenges. This is 7.6 percent of the total of the 5,592 IPR challenges filed since 2012. We decided to look into Apple and Samsung’s district court litigation and see if the rise of IPR filings -- or in general, their IPR activity -- is closely correlated to the number of times they are sued. 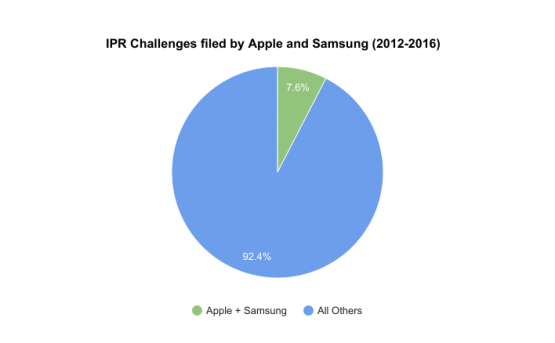 The following chart compares Apple district court litigation with the company’s IPR filings since 2012. As you can see, the number of times companies sued Apple last year dropped more than 55 percent from 60 to 27. The 27 represents the lowest number since 2012. However, for the same period Apple still filed 80 IPR challenges, which is comparable to the 94 challenges the company filed the previous year. Given there is a time bar of 12 months from the time one is served with the lawsuit until the filing of an IPR, we believe many of Apple’s filings may not necessarily be related to the company’s district court cases, meaning that some filings are related to pre-litigation matters or part of their strategy in some licensing deals. 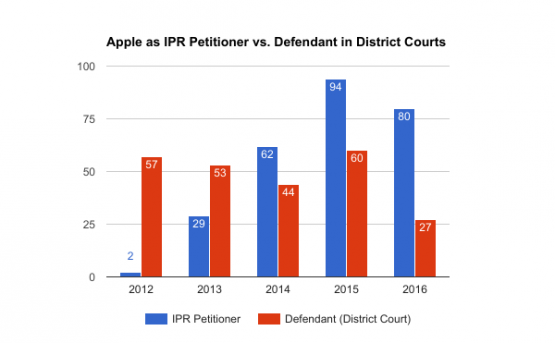 Similarly we compared Samsung district court litigation numbers with the company’s IPR filing activities. We noticed similar drop in patent lawsuits, but not as dramatic as with Apple. Samsung was sued 30 percent fewer times last year versus 2015, dropping from 52 to 36 cases. In the same period, Samsung’s IPR filing activity remained basically unchanged. This again shows that part of Samsung’s filings is not definitively related to active lawsuits, but it may be as part of the company’s strategy for licensing negotiation or pre-litigation matters. 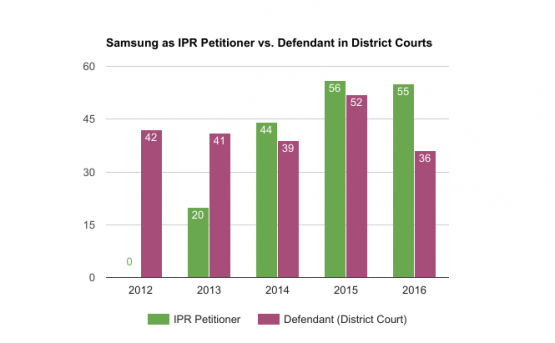 It is worth remembering that each IPR only challenges claims of a single patent, while each patent lawsuit may involve multiple patents. However, we showed in our previousWeekly Chart that the average number of patents per case remained about the same for 2015 and 2016 (1.76 vs. 1.81).

Our examination of IPR filings in 2016 shows that Apple remains the biggest user of this tool. However, a further review of Apple’s cases indicates that the tool is not necessarily used by the company as in response to district court litigation. While the number of lawsuits for the company has declined sharply, the number of IPR challenges Apple has filed is still relatively high. This shows that the company may use IPR for other purposes such as pre-litigation or licensing negotiation. A review of Samsung cases shows similar results. Both companies together have been responsible for about 8 percent of all IPR challenges filed since 2012.

In the following weeks, we will take a closer look at Apple and Samsung district court and IPR cases, compare patents and claims involved in IPRs and will identify the exact ratio of IPR challenges that were related to district court cases.